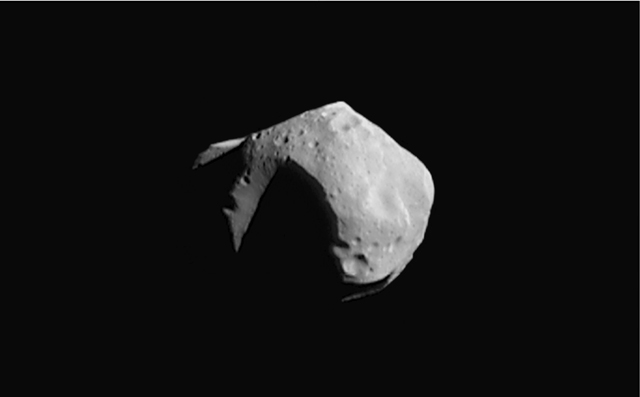 A 230 kilometers wide asteroid 324 Bamberga is making a relatively close flyby to our planet this week. It will reach opposition in the constellation Pisces on Friday, September 13, 2013 at 16:00 UTC and at that time will be 0.81 astronomical units (121 million km) away from Earth. 324 Bamberga will be shining at magnitude +8.1.

This asteroid, as you might presume, poses no threat to Earth but what's interesting about it is that it is the only asteroid this size that gets so close to us. 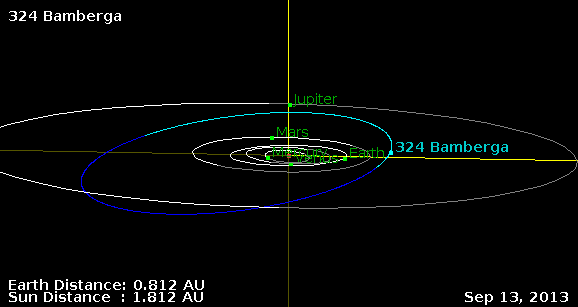 324 Bamberga is also one of the largest asteroids in the asteroid belt. It was discovered by Johann Palisa on February 25, 1892 in Vienna, making it one of the last large (diameter over 200 km) asteroids discovered. Apart from the near-earth asteroid Eros, it was the last asteroid which is ever easily visible with binoculars to be discovered.

Although its very high orbital eccentricity means its opposition magnitude varies greatly, at a rare opposition near perihelion Bamberga can reach a magnitude of +8.0, which is as bright as Saturn's moon Titan. Such near-perihelion oppositions occur on a regular cycle every twenty-two years, with the last occurring in 1991.

Its brightness at these rare near-perihelion oppositions makes Bamberga the brightest C-type asteroid, roughly one magnitude brighter than 10 Hygiea's maximum brightness of around +9.1. At such an opposition Bamberga can in fact be closer to Earth than any main-belt asteroid with magnitude above +9.5, getting as close as 0.78 AU.

For comparison, 7 Iris never comes closer than 0.85 AU and 4 Vesta never closer than 1.13 AU (when it becomes visible to the naked eye in a light pollution-free sky).

Overall Bamberga is the tenth brightest main-belt asteroid after, in order, Vesta, Pallas, Ceres, Iris, Hebe, Juno, Melpomene, Eunomia and Flora. Its high eccentricity (for comparison 36% higher than that of Pluto), though, means that at most oppositions other asteroids reach higher magnitudes. It has an unusually long rotation period among the large asteroids. Its spectral class is intermediate between the C-type and P-type asteroids (Wiki).

324 Bamberga only reaches a favorable opposition once every 22 years and the next chance to observe it will be in September 2035.