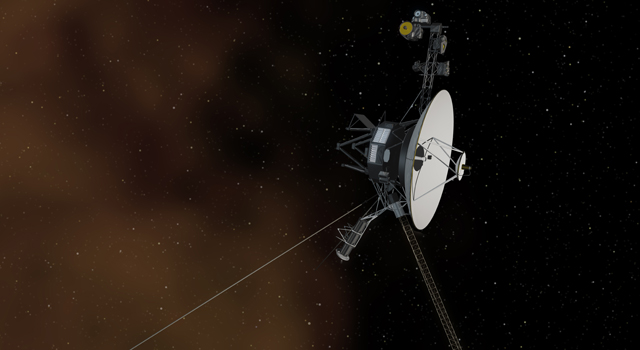 NASA's Voyager 1 spacecraft has experienced a new "tsunami wave" from the sun as it sails through interstellar space. Such waves are what led scientists to the conclusion, in the fall of 2013, that Voyager had indeed left our sun's bubble, entering a new frontier.

"Normally, interstellar space is like a quiet lake," said Ed Stone of the California Institute of Technology in Pasadena, California, the mission's project scientist since 1972. "But when our sun has a burst, it sends a shock wave outward that reaches Voyager about a year later. The wave causes the plasma surrounding the spacecraft to sing."

Data from this newest tsunami wave generated by our sun confirm that Voyager is in interstellar space – a region between the stars filled with a thin soup of charged particles, also known as plasma. The mission has not left the solar system – it has yet to reach a final halo of comets surrounding our sun – but it broke through the wind-blown bubble, or heliosphere, encasing our sun.

Voyager is the farthest human-made probe from Earth, and the first to enter the vast sea between stars.

"All is not quiet around Voyager," said Don Gurnett of the University of Iowa, Iowa City, the principal investigator of the plasma wave instrument on Voyager, which collected the definitive evidence that Voyager 1 had left the sun's heliosphere. "We're excited to analyze these new data. So far, we can say that it confirms we are in interstellar space."

Our sun goes through periods of increased activity, where it explosively ejects material from its surface, flinging it outward. These events, called coronal mass ejections, generate shock, or pressure, waves. Three such waves have reached Voyager 1 since it entered interstellar space in 2012. The first was too small to be noticed when it occurred and was only discovered later, but the second was clearly registered by the spacecraft's cosmic ray instrument in March of 2013.

Cosmic rays are energetic charged particles that come from nearby stars in the Milky Way galaxy. The sun's shock waves push these particles around like buoys in a tsunami. Data from the cosmic ray instrument tell researchers that a shock wave from the sun has hit.

Meanwhile, another instrument on Voyager registers the shock waves, too. The plasma wave instrument can detect oscillations of the plasma electrons.

"The tsunami wave rings the plasma like a bell," said Stone. "While the plasma wave instrument lets us measure the frequency of this ringing, the cosmic ray instrument reveals what struck the bell — the shock wave from the sun."

This ringing of the plasma bell is what led to the key evidence showing Voyager had entered interstellar space. Because denser plasma oscillates faster, the team was able to figure out the density of the plasma. In 2013, thanks to the second tsunami wave, the team acquired evidence that Voyager had been flying for more than a year through plasma that was 40 times denser than measured before — a telltale indicator of interstellar space.

Why is it denser out there? The sun's winds blow a bubble around it, pushing out against denser matter from other stars.

Now, the team has new readings from a third wave from the sun, first registered in March of this year. These data show that the density of the plasma is similar to what was measured previously, confirming the spacecraft is in interstellar space. Thanks to our sun's rumblings, Voyager has the opportunity to listen to the singing of interstellar space — an otherwise silent place.

Voyager 1 and its twin, Voyager 2, were launched 16 days apart in 1977. Both spacecraft flew by Jupiter and Saturn. Voyager 2 also flew by Uranus and Neptune. Voyager 2, launched before Voyager 1, is the longest continuously operated spacecraft and is expected to enter interstellar space in a few years.

NASA's Voyager 1 spacecraft captured these sounds of interstellar space. Voyager 1's plasma wave instrument detected the vibrations of dense interstellar plasma, or ionized gas, from October to November 2012 and April to May 2013.

The soundtrack reproduces the amplitude and frequency of the plasma waves as "heard" by Voyager 1. The waves detected by the instrument antennas can be simply amplified and played through a speaker. These frequencies are within the range heard by human ears.

Scientists noticed that each occurrence involved a rising tone. The dashed line indicates that the rising tones follow the same slope. This means a continuously increasing density.

When scientists extrapolated this line even further back in time (not shown), they deduced that Voyager 1 first encountered interstellar plasma in August 2012.

Featured image: This artist's concept shows the Voyager 1 spacecraft entering the space between stars. Interstellar space is dominated by plasma, ionized gas (illustrated here as brownish haze), that was thrown off by giant stars millions of years ago. Image credit: NASA/JPL-Caltech