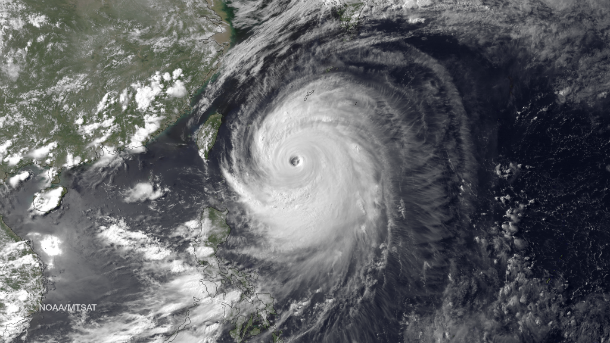 Neoguri is the first super typhoon of 2014. The 7th named storm and 3rd typhoon of the 2014 Western Pacific typhoon season is about to cause some major damage on its path. On July 7, 2014 Neoguri reached super typhoon status with maximum sustained winds near 240.8 km/h (149.6 mph/). Meanwhile, the system has weaken a bit and currently Neoguri is a typhoon with maximum sustained winds of 205 km/h (125 mph), moving over the southern Japanese islands. Waves up to 12 meters (39 feet) have been reported off the coast of Okinawa. 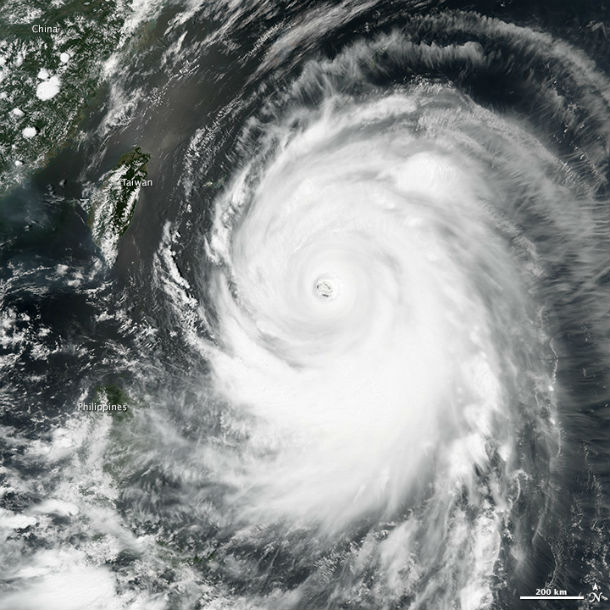 ​The storm’s maximum sustained winds were blowing at about 240 km/h (150 mph) when the Visible Infrared Imaging Radiometer Suite (VIIRS) sensor on Suomi-NPP captured this image of the Category 4 storm churning toward Okinawa and southern Japan on July 7, 2014, at 4:55 UTC. (NASA Earth Observatory image by Jesse Allen and Robert Simmon, using VIIRS data from the Suomi National Polar-orbiting Partnership. Suomi NPP is the result of a partnership between NASA, the National Oceanic and Atmospheric Administration, and the Department of Defense. Caption by Adam Voiland.)

All schools, trains, airports and ferry services in the prefecture of Okinawa have been closed. 25,000 homes have lost power across Okinawa. Neoguri will cross between the Ryukyu Islands of Miyako Jima and Okinawa as an extremely dangerous typhoon and will make landfall in southern Japan as powerful typhoon. More than 500 000 residents from the southern coastlines have been advised to evacuate ahead of Typhoon Neoguri due to the threat of storm surge near the coast and flash flooding farther inland. Across much of Honshu flooding will be a problem, including in the Tokyo area river level rise. 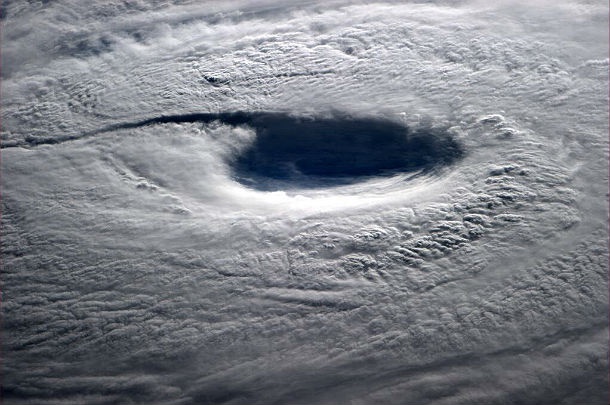 Eye of the Super Typhoon Neoguri seen from space. Image was captured by astronaut Reid Wiseman onboard ISS at 21:55 UTC on July 7, 2014 . (Credit: ISS/AstroReid)

After Okinawa, Neoguri will begin to turn to the northeast toward mainland Japan with landfall expected on Kyushu Island late on July 8, 2014. Damaging winds, flooding rainfall and inundating storm surge will bring very dangerous conditions to the islands of Kyushu and Shikoku, including the cities of Kagoshima and Nagasaki.

All coastal communities along the southern and eastern coast of mainland Japan will experience an increase in water levels and extremely rough surf. The interaction of moisture from Neoguri and a cold front will lead to torrential rain and high risk of flooding. Heavy rains from Neoguri will cause major flooding on Japanese mainland on July 9/10, 2014, after the region already seen some significant rainfall last few days.  In parts of Kyushu as much as 374 mm (14 inch) of rainfall fell in the past 24 hours. 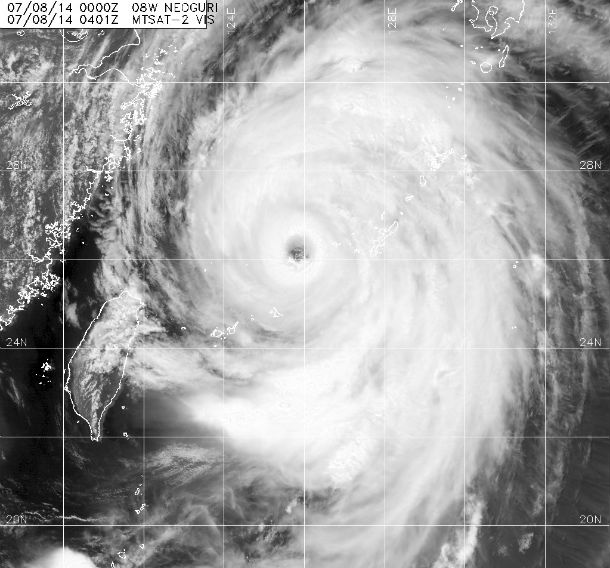 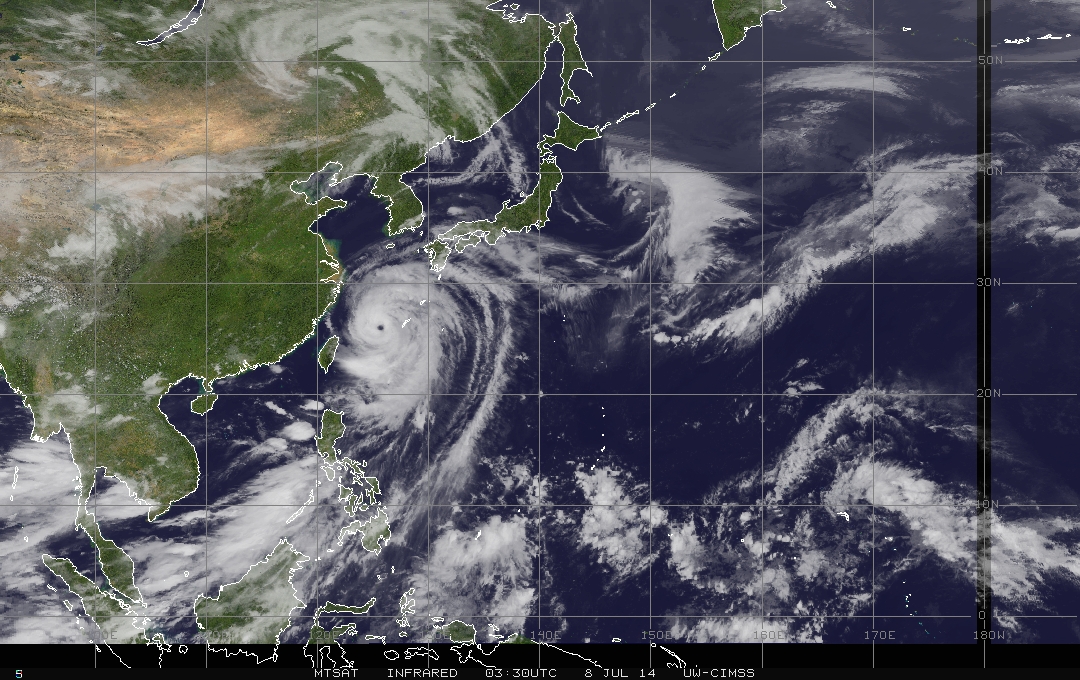 By July 9, cooling sea surface temperatures, increasing vertical wind shear ahead of the mid-latitude westerlies, and landfall into Kyushu, Japan, will slowly erode the system, however, Neoguri could still make landfall as a dangerous category 2 or 3 typhoon.

Tropical Cyclone Neoguri formed on July 4 in Northwestern Pacific ocean and during July 5 it strengthened into a typhoon, just after it passed Guam. By July 7 Neoguri had grown into a super typhoon with maximum sustained winds near 240.8 km/h (149.6 mph/). Joint Typhoon Warning Center (JTWC) reported maximum significant wave heights of 12 meters (40 feet). 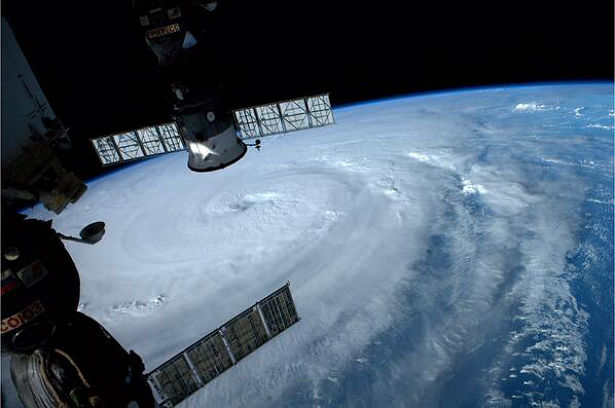 According to US Military Commanders, Typhoon Neoguri could be the strongest typhoon to hit Okinawa in 15 years. In 2003 a storm of the same intensity named Typhoon Maemi moved across the area with winds gusting up to 267 km/h (166 mph). 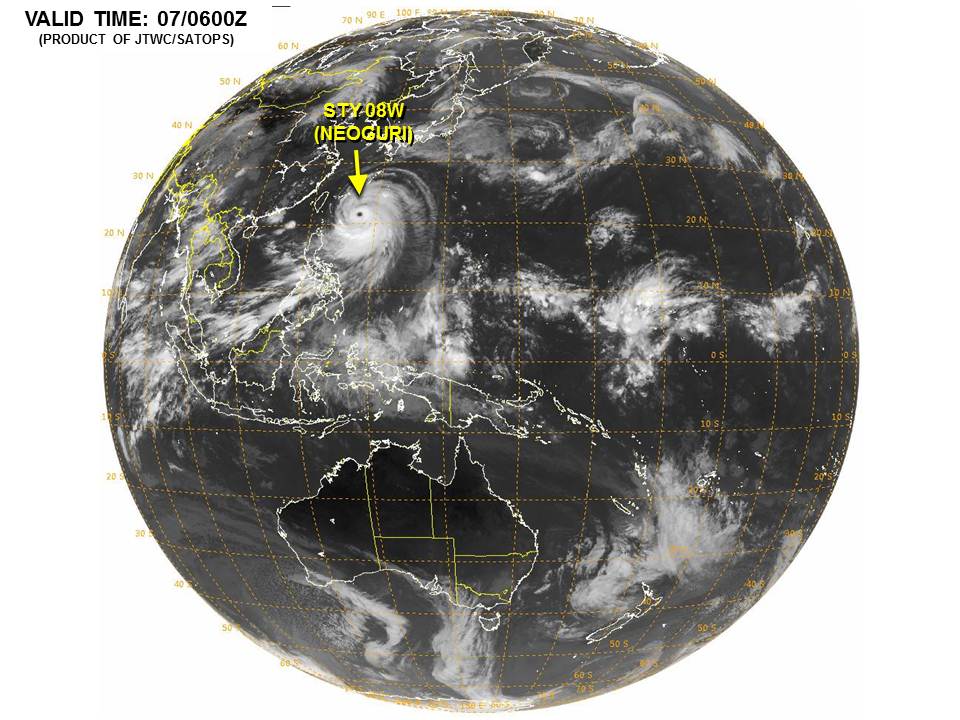