There are 3 confirmed deaths so far in Guatemala, and one death in Mexico. Also there are reported 21 injured persons. A preliminary statement shows that 48 houses collapsed in San Marcos, Guatemala. The authorities are working on unblocking some access routes in the region affected by landslides. (ER)

Mexico local news media reported the quake was felt strongly in the Mexican states of Chiapas and Tabasco.

Many landslides are reported throughout the region.

USGS issued yellow alert level for shaking-related fatalities. Some casualties are possible. Orange alert level was issued for economic losses. Significant damage is likely and the disaster is potentially widespread. Estimated economic losses are less than 1% of GDP of Mexico. Past events with this alert level have required a regional or national level response.

Overall, the population in this region resides in structures that are a mix of vulnerable and earthquake resistant construction. The predominant vulnerable building types are mud wall and concrete/cinder block masonry construction.

16:16 UTC: The earthquake death toll has increased to at least 6 – 3 in Chiapas, Mexico and 3 in Guatemala

The July 7, 2014 M 6.9 earthquake near the coast of Chiapas, Mexico occurred as the result of normal faulting at a depth of 60 km. The earthquake occurred near the border between Mexico and Guatemala, near Puero Madero, Mexico, and about 200 km from Guatemala City, Guatemala, which has a population of one million people. At the location of the earthquake, the Cocos plate subducts to the northeast beneath the North America plate at a velocity of approximately 79 mm/yr, forming the Middle America subduction zone. The mechanism of the earthquake is consistent with extension within the down-going Cocos slab. The earthquake occurred below and to the east of the slab interface where larger, thrust-type earthquakes can occur.

The region around the July 7 earthquake is highly seismically active, having produced 12 events of M7.0 or greater since 1902 within 200 km of the epicenter. Most recently, an M7.4 event occurred in November 2012 on the subduction zone interface 123 km southeast of the July 7 event. Other notable events include an M7.2 in 1993 which caused 1 casualty in western Guatemala; an M7.7 in 1942 with 38 casualties and widespread damage, and two events of M7.8 and 7.5 in 1902. 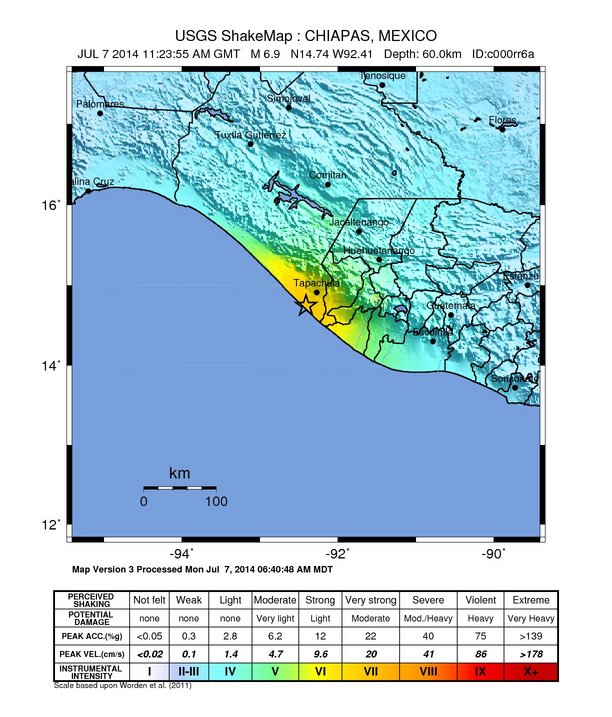 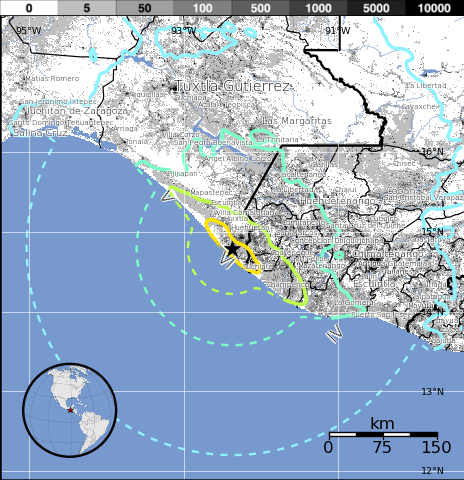