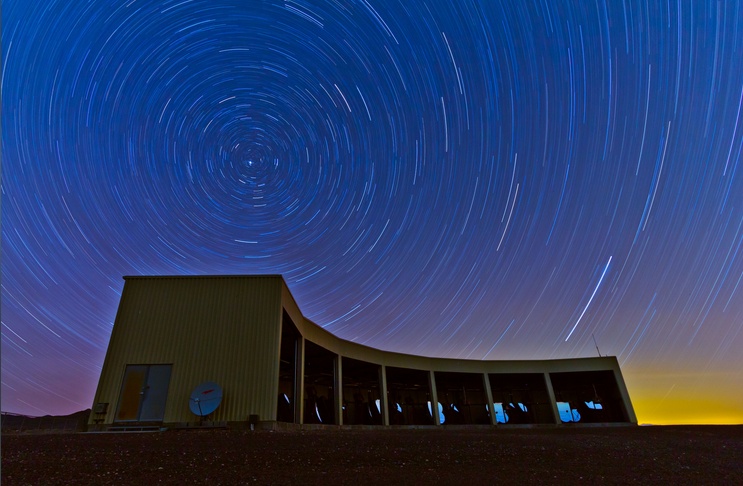 An observatory run by the University of Utah found a "hotspot" beneath the Big Dipper emitting a disproportionate number of the highest-energy cosmic rays. The discovery moves physics another step toward identifying the mysterious sources of the most energetic particles in the universe.

"This puts us closer to finding out the sources – but no cigar yet," says University of Utah physicist Gordon Thomson, spokesman and co-principal investigator for the $25 million Telescope Array cosmic ray observatory west of Delta, Utah. It is the Northern Hemisphere's largest cosmic ray detector.

"All we see is a blob in the sky, and inside this blob there is all sorts of stuff – various types of objects – that could be the source" of the powerful cosmic rays, he adds. "Now we know where to look."

A new study identifying a hotspot in the northern sky for ultrahigh-energy cosmic rays has been accepted for publication by Astrophysical Journal Letters.

Thomson says many astrophysicists suspect ultrahigh-energy cosmic rays are generated by active galactic nuclei, or AGNs, in which material is sucked into a supermassive black hole at the center of galaxy, while other material is spewed away in a beam-like jet known as a blazar. Another popular possibility is that the highest-energy cosmic rays come from some supernovas (exploding stars) that emit gamma rays bursts.

Lower-energy cosmic rays come from the sun, other stars and exploding stars, but the source or sources of the most energetic cosmic rays has been a decades-long mystery.

The study was conducted by 125 researchers in the Telescope Array project, including Thomson and 31 other University of Utah physicists, plus 94 other scientists from the University of Tokyo and 28 other research institutions in Japan, the United States, South Korea, Russia and Belgium.

Particles from Beyond Our Galaxy

Cosmic rays, discovered in 1912, really are particles, not rays: either bare protons (hydrogen nuclei) or the centers or nuclei of heavier elements such as carbon, oxygen, nitrogen or iron. Thomson and many physicists believe ultrahigh-energy cosmic rays are just protons, though some suspect they include helium and nitrogen nuclei.

Besides active galactic nuclei and gamma ray emitters, possible sources include noisy radio galaxies, shock waves from colliding galaxies and even some exotic hypothetical sources such as the decay of so-called "cosmic strings" or of massive particles left over from the big bang that formed the universe 13.8 billion years ago.

Ultrahigh-energy cosmic rays come from beyond our galaxy, the Milky Way, which is about 100,000 light years wide (588 million billion miles). But 90 percent of them come from within 300 million light years (1,764 billion billion miles) because powerful cosmic rays from greater distances are greatly weakened by interaction with cosmic microwave background radiation – the faint afterglow of the big bang, says Charlie Jui, a University of Utah professor of physics and astronomy.

The most powerful or highest-energy cosmic ray ever measured was detected over Utah in 1991 by the University of Utah's Fly's Eye observatory at the U.S. Army's Dugway Proving Ground – a predecessor to the Telescope Array. That cosmic ray particle carried energy of 300 billion billion electron volts (3 times 10 to the 20th power).

Those collisions create a cascade of other collisions with atmospheric gases, resulting in "air showers" of particles detected by 523 table-like scintillation detectors spaced over 300 square miles of desert. In the new study, 507 of the scintillation detectors were used to study the ultrahigh-energy cosmic rays, says John Matthews, a University of Utah research professor of physics and astronomy. The fluorescence detectors helped determine the energy and chemical makeup of the cosmic ray particles.

The new study by the Telescope Array research team looked at ultrahigh-energy cosmic rays above 57 billion billion electron volts (5.7 times 10 to the 19th power). Thomson says that high cutoff was picked because the highest-energy cosmic rays are bent the least by magnetic fields in space – bending that obscures the directions from which they came and thus the directions of their sources.

These very powerful cosmic rays were recorded by the Telescope Array between May 11, 2008, and May 4, 2013. During the five years, only 72 such cosmic rays were detected, confirmed and analyzed for their energy and source direction.

But 19 of those cosmic rays were detected coming from the direction of the hotspot, compared with only 4.5 that would have been expected if the cosmic rays came randomly from all parts of the sky, Jui says.

The hotspot is a 40-degree-diameter circle representing 6 percent of the northern sky. "We have a quarter of our events in that circle instead of 6 percent," Jui says.

Thomson says the hotspot is centered in the southwest corner of the constellation Ursa Major, which includes the arrangement of stars known as the Big Dipper.

"The hotspot is a couple of hand widths below the Big Dipper's handle," he says.

More precisely – although it is not visible through regular telescopes – the hotspot is centered at right ascension 146.6 degrees and declination 43.2 degrees.

The hotspot is near the "supergalactic plane" – the rather flattened Virgo supercluster of galaxies. Our Milky Way galaxy is on the outskirts of the supercluster.

The odds that the hotspot is a statistical fluke rather than real are only 1.4 in 10,000, the researchers calculated.

Observations by the Pierre Auger cosmic ray observatory in Argentina provide evidence for a weaker Southern Hemisphere hotspot. If that proves real, Thomson says cosmic rays in the northern and southern hotspots must come from different sources. 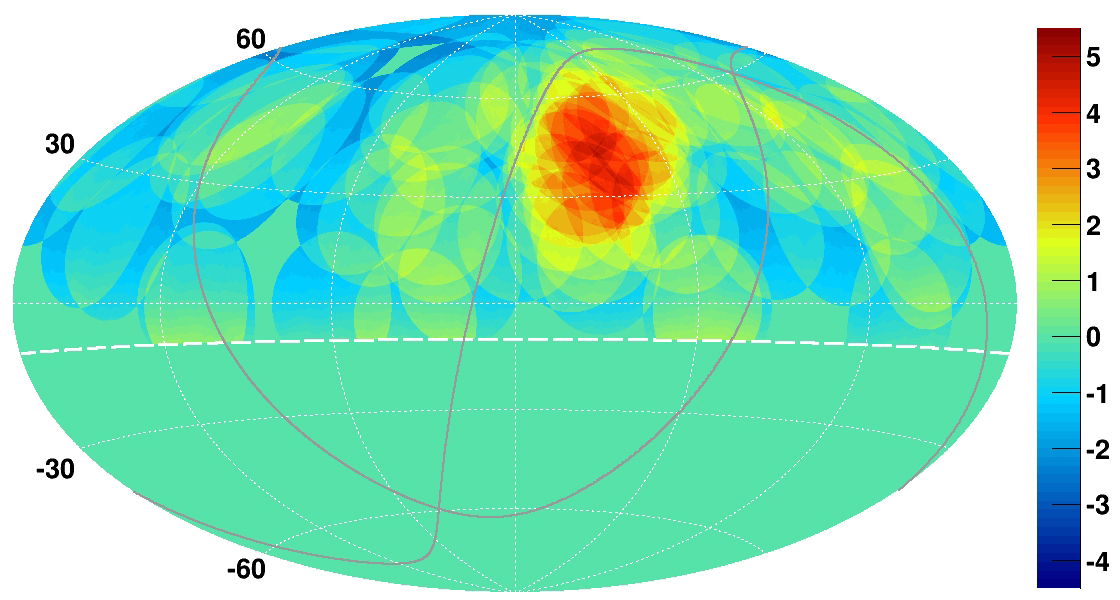 This map of the northern sky shows cosmic ray concentrations, with a “hotspot” with a disproportionate number of cosmic rays shown as the bright red and yellow spot, upper right. An international team of physicists using the University of Utah-operated Telescope Array near Delta, Utah, say their discovery of the hotspot should narrow the search for the mysterious source or sources of ultrahigh-energy cosmic rays, which carry more energy than any other known particle in the universe. Photo Credit: K. Kawata, University of Tokyo Institute for Cosmic Ray Research.

Jui says a separate study now in progress suggests the distribution of ultrahigh-energy cosmic rays in the northern sky is consistent with the "large-scale structure" of the universe, which means the cosmic rays tend to come from areas of the universe where matter is concentrated in clusters and superclusters of galaxies.

"It tells us there is at least a good chance these are coming from matter we can see as opposed to a different class of mechanisms where you are producing these particles with exotic processes" such cosmic strings, he says. "It points us to the next logical step in the search: building a larger detector that collects four times as many [ultrahigh-energy cosmic ray] events per year. With more events, we are more likely to see structure in that hotspot blob and that may point us toward the real sources."

Physicists want to expand the size and thus sensitivity of the Telescope Array, doubling the number of table-shaped scintillation detectors to about 1,100 but spacing them farther from each other and thus quadrupling the area across which they are scattered. All the land for the expansion is located north and south of the present observatory and is owned by the federal Bureau of Land Management and the Utah School and Institutional Trust Lands Administration, Thomson says.

He adds that researchers hope to obtain $6.4 million needed for the expansion from U.S. and Japanese governments later this year, then finish the expansion in 2016.

The Telescope Array, built for $17 million, started operations in 2008 and later was upgraded, bringing the cost to about $25 million, of which Japan financed about two-thirds and the United States about one-third, mainly through the University of Utah, Matthews says.

Featured image: In this time-lapse photo, stars appear to rotate above the Middle Drum facility of the Telescope Array, a $25 million cosmic ray observatory that sprawls across the desert west of Delta, Utah. Physicists from the University of Utah, University of Tokyo and elsewhere report the observatory has detected a "hotspot" in the northern sky emitting a disproportionate number of ultrahigh-energy cosmic rays, which are the most energetic particles in the universe. The discovery of a hotspot is a step in the long quest to discover the source or sources of the most powerful cosmic rays. Image credit: Ben Stokes, University of Utah.