With Mars looming ever larger in front of it, NASA’s Mars Science Laboratory spacecraft and its Curiosity rover are in the final stages of preparing for entry, descent and landing on the Red Planet At 10:31 p.m. August 5, 2012 PDT (1:31 a.m. August 6 EDT, 05:31 August 6 UTC Earth time – 3 pm Mars time). Curiosity remains in good health with all systems operating as expected. Today, the flight team uplinked and confirmed commands to make minor corrections to the spacecraft’s navigation reference point parameters. This afternoon, as part of the onboard sequence of autonomous activities leading to the landing, catalyst bed heaters are being turned on to prepare the eight Mars Lander Engines that are part of MSL’s descent propulsion system. As of 2:25 p.m. PDT (5:25 p.m. EDT), MSL was approximately 261,000 miles (420,039 kilometers) from Mars, closing in at a little more than 8,000 mph (about 3,600 meters per second).

The focal point of Martian activity here on Earth will be located in the Mission Support Area in Building 230 at NASA’s Jet Propulsion Laboratory in Pasadena, Calif. From this facility will come news of the progress of NASA’s Curiosity Mars rover’s landing. Visit an interactive page at http://bit.ly/mslmsa to explore the room a bit further and get a who’s who of team members – as well as the history of one dry-roasted room essential.

Where to watch online 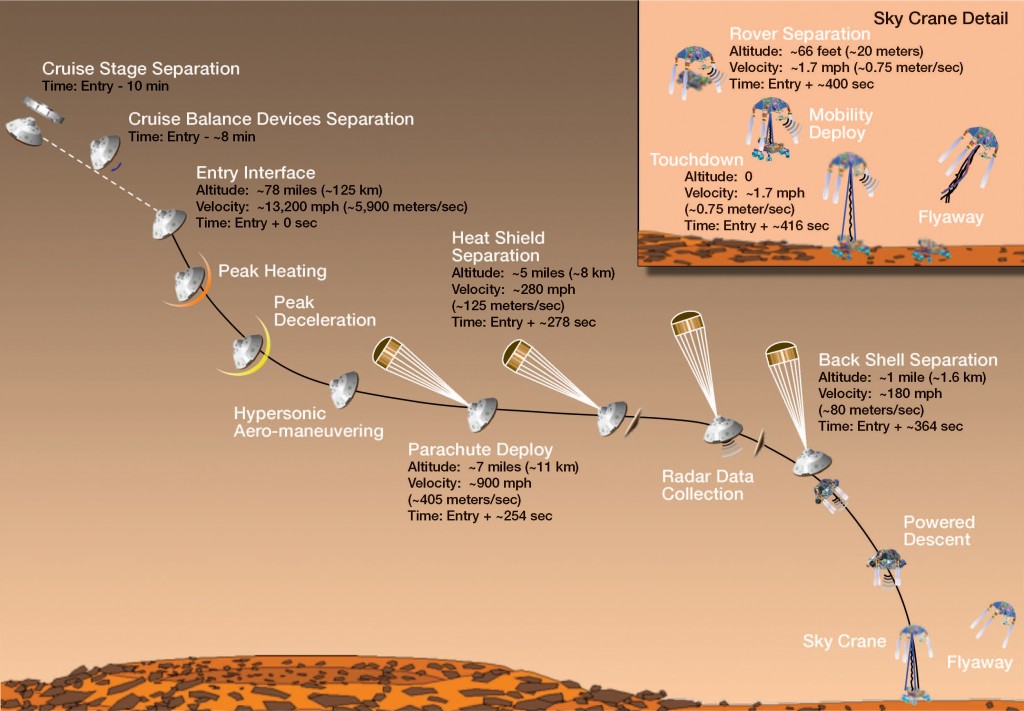 The above streams will be available to watch from 4:30 am UTC on August 6th, with the entry and landing scheduled for around 6:30 am UTC.

The area where NASA’s Curiosity rover will land on has a geological diversity that scientists are eager to investigate, as seen in this false-color map based on data from NASA’s Mars Odyssey orbiter. The image was obtained by Odyssey’s Thermal Emission Imaging System. It merges topographical data with thermal inertia data that record the ability of the surface to hold onto heat.

An alluvial fan is visible around a crater to the northwest of the landing area. A series of undulating lines traveling southeast from the crater indicates similar material moving down a slope. The material, which appears bluish-green in this image, also forms a fan shape.

An area in red indicates a surface material that is more tightly cemented together than rocks around it and likely has a high concentration of minerals. An attractive interpretation for this texture is that water could have been present there some time in the past.

Curiosity is expected to land within the large Gale Crater. The rim of a smaller crater (about a half mile, or 1 kilometer, in diameter) inside of Gale is visible at the bottom right of the image. NASA’s Jet Propulsion Laboratory manages the 2001 Mars Odyssey mission for NASA’s Science Mission Directorate, Washington, D.C. The Thermal Emission Imaging System (THEMIS) was developed by Arizona State University, Tempe, in collaboration with Raytheon Santa Barbara Remote Sensing. The THEMIS investigation is led by Dr. Philip Christensen at Arizona State University. Lockheed Martin Astronautics, Denver, is the prime contractor for the Odyssey project, and developed and built the orbiter. Mission operations are conducted jointly from Lockheed Martin and from JPL, a division of the California Institute of Technology in Pasadena.