The Mast Camera (Mastcam) on NASA's Curiosity Mars rover has captured the first image of an asteroid taken from the surface of Mars. The night-sky image actually includes two asteroids: Ceres and Vesta, plus one of Mars' two moons, Deimos, which may have been an asteroid before being captured into orbit around Mars.

The image was taken after nightfall on the 606th Martian day, or sol, of Curiosity's work on Mars which was April 20, 2014. In other camera pointings the same night, the Mastcam also imaged Mars' larger moon, Phobos, plus the planets Jupiter and Saturn.

Ceres, with a diameter of about 950 kilometers (590 miles), is the largest object in the asteroid belt, large enough to be classified as a dwarf planet. Vesta is the third-largest object in the asteroid belt, about 563 kilometers (350 miles) wide. These two bodies are the destinations of NASA's Dawn mission, which orbited Vesta in 2011 and 2012 and is on its way to begin orbiting Ceres in 2015. 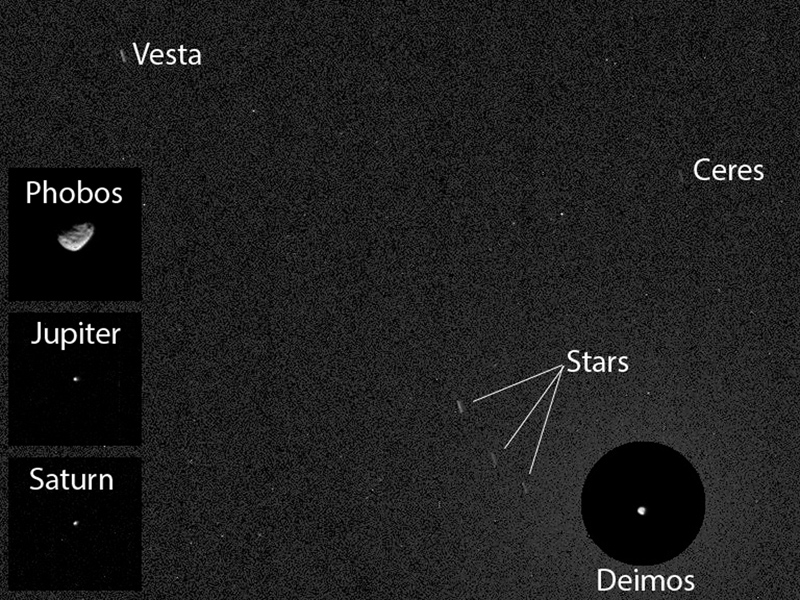 This annotated image combines portions of images taken at the same pointing with two different exposure times, plus insets from other camera pointings. In the main portion of the image, Vesta, Ceres and three stars appear as short streaks due to the duration of a 12-second exposure. The background is detector noise, limiting what we can see to magnitude 6 or 7, much like normal human eyesight. The two asteroids and three stars would be visible to someone of normal eyesight standing on Mars. Specks are effects of cosmic rays striking the camera's light detector.

Three square insets at left show Phobos, Jupiter and Saturn at exposures of one-half second each. Deimos was much brighter than the visible stars and asteroids in the same part of the sky, in the main image. The circular inset covers a patch of sky the size that Earth's full moon appears to observers on Earth. At the center of that circular inset, Deimos appears at its correct location in the sky, in a one-quarter-second exposure. In the unannotated version of the 12-second-exposure image, the brightness of Deimos saturates that portion of the image, making the moon appear overly large.

Ceres and Vesta are much larger and farther from Earth's orbit than the types of near-Earth asteroids under consideration for NASA's asteroid initiative. That initiative includes two separate, but related activities: the asteroid redirect mission and the grand challenge. NASA is currently developing concepts for the redirect mission that will employ a robotic spacecraft, driven by an advanced solar electric propulsion system, to capture a small near-Earth asteroid or remove a boulder from the surface of a larger asteroid. The spacecraft then will attempt to redirect the object into a stable orbit around the moon.

Astronauts will travel aboard NASA's Orion spacecraft, launched on the Space Launch System rocket, to rendezvous in lunar orbit with the captured asteroid. Once there, they will collect samples to return to Earth for study.

The grand challenge is a search for the best ideas for finding asteroids that pose a potential threat to human populations, and to accelerate the work NASA already is doing for planetary defense.