The Visual Monitoring Camera (VMC) attached to Mars Express captured a mysteriously long, thin cloud over the 20 km (12 miles) high Arsia Mons volcano on July 17 and 19, 2020. According to ESA, the cloud is a recurrent feature made up of water ice and is influenced by the volcano's leeward slope.

"We have been investigating this intriguing phenomenon and were expecting to see such a cloud form around now," said Jorge Hernandez-Bernal, Ph.D. candidate at the University of the Basque Country and the lead author of the ongoing study about the phenomenon.

"This elongated cloud forms every martian year during this season around the southern solstice, and repeats for 80 days or even more, following a rapid daily cycle. However, we don’t know yet if the clouds are always quite this impressive."

A sol or Martian day lasts slightly longer than an Earth day at 24 hours, 39 minutes, and 35 seconds. A year at Mars has 668 sols or approximately 687 Earth days, so seasons last twice as long at the red planet.

The southern solstice occurs when the Sun is in the southernmost position in the martian skies, like December 21 on Earth. In the early mornings during this time, the fleeting cloud grows for about three hours, rapidly disappearing again a few hours later. 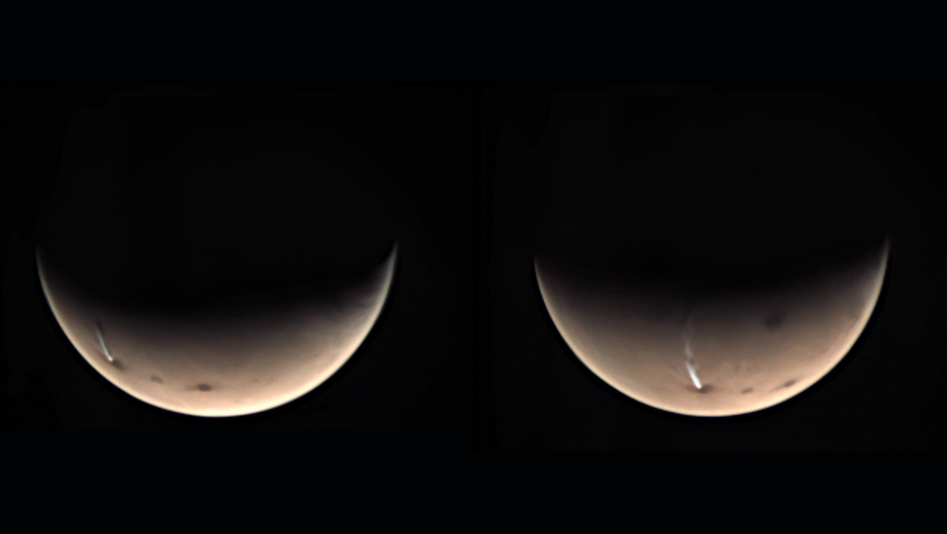 Most spacecraft in orbit around Mars usually observe it in the afternoon. Meanwhile, Mars Express is located in the best position to collect and provide critical information on this unique phenomenon.

"The extent of this huge cloud can't be seen if your camera only has a narrow field of view, or if you're only observing in the afternoon," said Eleni Ravanis, a Young Graduate Trainee for the Mars Express mission who works mainly for VMC.

"Luckily for Mars Express, the highly elliptical orbit of the spacecraft, coupled with the wide field of view of the VMC instrument, lets us take pictures covering a wide area of the planet in the early morning. That means we can catch it!"

Starting in September 2018, a daily repeating extremely elongated cloud was observed extending from the Mars Arsia Mons volcano. We study this Arsia Mons Elongated Cloud (AMEC) using images from VMC, HRSC, and OMEGA on board Mars Express, IUVS on MAVEN, and MARCI on MRO. We study the daily cycle of this cloud, showing how the morphology and other parameters of the cloud evolved with local time. The cloud expands every morning from the western slope of the volcano, at a westward velocity of around 150m/s, and an altitude of around 30-40km over the local surface. Starting around 2.5 hours after sunrise (8.2 Local True Solar Time, LTST), the formation of the cloud resumes, and the existing cloud keeps moving westward, so it detaches from the volcano, until it evaporates in the following hours. At this time, the cloud has expanded to a length of around 1500km. Short time later, a new local cloud appears on the western slope of the volcano, starting around 9.5 LTST, and grows during the morning.This daily cycle repeated regularly for at least 90 sols in 2018, around Southern Solstice (Ls 240-300) in Martian Year (MY) 34. According with these and previous MEx/VMC observations, this elongated cloud is a seasonal phenomenon occurring around Southern Solstice every Martian Year. We study the interannual variability of this cloud, the influence of the Global Dust Storms in 2018 on the cloud's properties (Sánchez-Lavega et al., Geophys. Res. Lett. 46, 2019), and its validity as a proxy for the global state of the Martian atmosphere (Sánchez-Lavega et al., J. Geophys. Res., 123, 3020, 2018). We discuss the physical mechanisms behind the formation of this peculiar cloud in Mars.