NASA's Curiosity Mars rover has collected its first sample of the layered mountain whose scientific allure drew the mission to choose this part of Mars as a landing site.

Late Wednesday, September 24, the rover's hammering drill chewed about 6.7 centimeters (2.6 inches) deep into a basal-layer outcrop on Mount Sharp and collected a powdered-rock sample. Data and images received early Thursday at NASA's Jet Propulsion Laboratory, Pasadena, California, confirmed success of this operation. The powder collected by the drilling is temporarily held within the sample-handling mechanism on the rover's arm.

"This drilling target is at the lowest part of the base layer of the mountain, and from here we plan to examine the higher, younger layers exposed in the nearby hills," said Curiosity Deputy Project Scientist Ashwin Vasavada of JPL. "This first look at rocks we believe to underlie Mount Sharp is exciting because it will begin to form a picture of the environment at the time the mountain formed, and what led to its growth."

After landing on Mars in August 2012 but before beginning the drive toward Mount Sharp, Curiosity spent much of the mission's first year productively studying an area much closer to the landing site, but in the opposite direction. The mission accomplished its science goals in that Yellowknife Bay area. Analysis of drilled rocks there disclosed an ancient lakebed environment that, more than three billion years ago, offered ingredients and a chemical energy gradient favorable for microbes, if any existed there.

From Yellowknife Bay to the base of Mount Sharp, Curiosity drove more than 8 kilometers (5 miles) in about 15 months, with pauses at a few science waypoints. The emphasis in mission operations has now changed from drive, drive, drive to systematic layer-by-layer investigation.

"We're putting on the brakes to study this amazing mountain," said Curiosity Deputy Project Manager Jennifer Trosper of JPL. "Curiosity flew hundreds of millions of miles to do this." 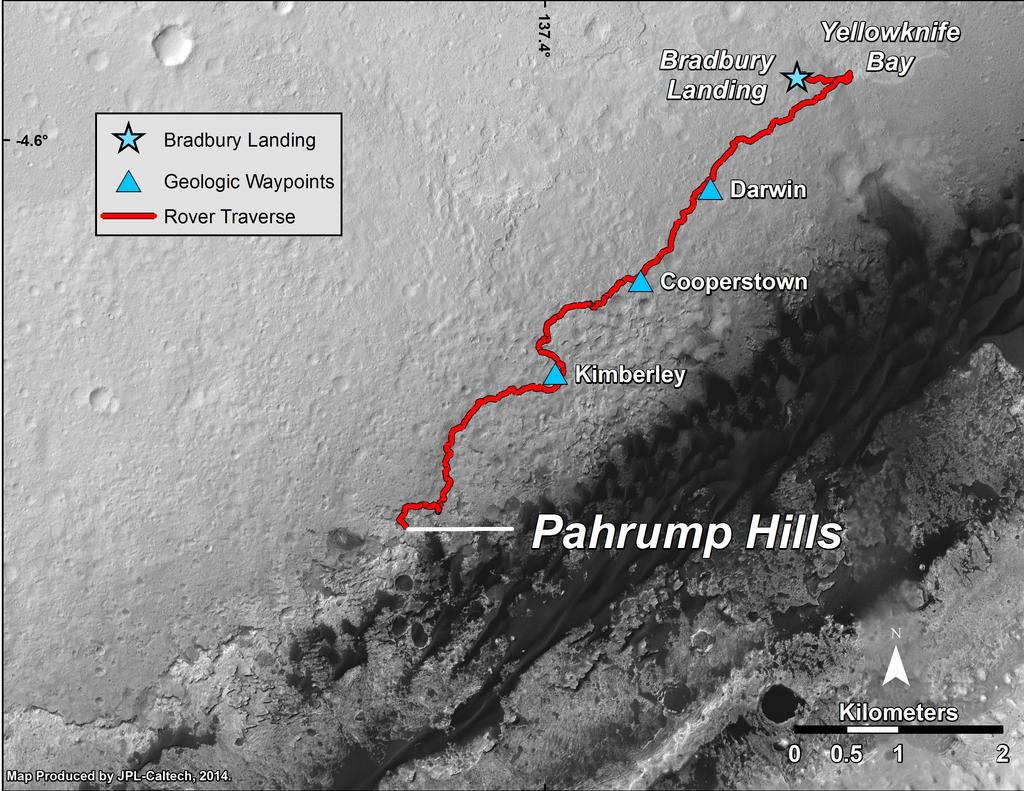 Curiosity arrived September 19 at an outcrop called "Pahrump Hills," which is a section of the mountain's basal geological unit, called the Murray formation. Three days later, the rover completed a "mini-drill" procedure at the selected drilling target, "Confidence Hills," to assess the target rock's suitability for drilling. A mini-drill activity last month determined that a rock slab under consideration then was not stable enough for full drilling, but Confidence Hills passed this test.

The rock is softer than any of the previous three targets where Curiosity has collected a drilled sample for analysis.

Between the mini-drill test and the sample-collection drilling, researchers used tools on Curiosity's mast and robotic arm for close-up inspection of geometrically distinctive features on the nearby surface of the rock.

These features on the Murray formation mudstones are the accumulations of resistant materials. They occur both as discrete clusters and as dendrites, where forms are arranged in tree-like branching. By investigating the shapes and chemical ingredients in these features, the team hopes to gain information about the possible composition of fluids at this Martian location long ago. 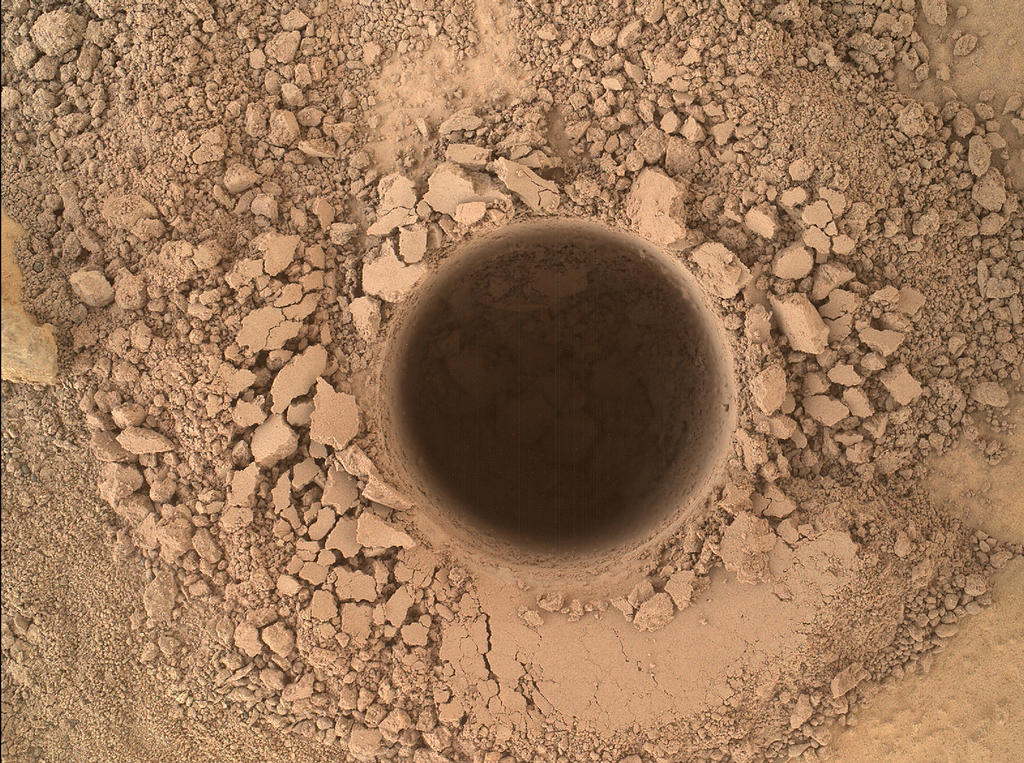 This image from the Mars Hand Lens Imager (MAHLI) camera on NASA's Curiosity Mars rover shows the first sample-collection hole drilled in Mount Sharp, the layered mountain that is the science destination of the rover's extended mission.

This is a merged-focus image product combining information from multiple images that MAHLI took from a position 5 cm (2 inches) away from the target. The images were taken on September 24, 2014, during the 759th Martian day, or sol, of Curiosity's work on Mars.

The next step will be to deliver the rock-powder sample into a scoop on the rover's arm. In the open scoop, the powder's texture can be observed for an assessment of whether it is safe for further sieving, portioning and delivery into Curiosity's internal laboratory instruments without clogging hardware. The instruments can perform many types of analysis to identify chemistry and mineralogy of the source rock.