The comet is expected to flyby at about 56 kilometers per second (126 000 mph), relative to Mars, enveloping the Red Planet in its dusty coma as it goes by. It will not hit Mars, but questions still remain about the potential risks to the Mars spacecraft from the dust and particles released by the passing comet.

There are currently five spacecraft in Mars's orbit. One from India (Mars Orbiter Mission), one from the European Union (Mars Express) and three from the United States (MOD, MRO, MAVEN) + two Mars rovers (Curiosity and Opportunity). They will all try to take a close look at this historic flyby.

The period of greatest danger is when Mars comes closest (around 27 600 km) to the comet's trajectory, and not when the comet's nucleus comes closest to the planet. This is about 90 minutes after the closest approach and will last about 20 minutes while Mars passes through the center of the widening trail of dust.

Siding Spring is coming from Oort Cloud, visiting our solar system for the first time, so there are lots of unknowns. This will be the first time ever to observe this kind of comet up close. Scientists hope to get answers about size of comet's nucleus, overall shape, surface brightness, effects of long periods exposure to solar radiation (sunlight) and other. 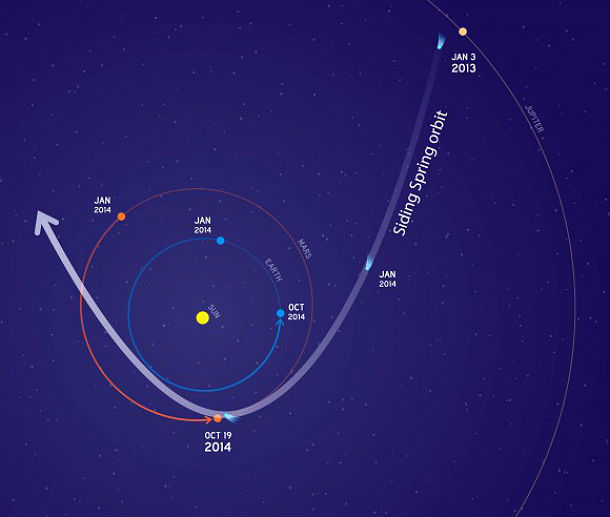 An illustration of the inner part of the orbit of comet C/2013 A1 Siding Spring. (Credit: NASA/JPL/CalTech)

The comet is expected to get fainter as viewed from Earth even as it gets much brighter as seen from Mars. This is because comet is now moving further away from Earth faster than it is approaching the Sun. It will continue to get closer to Mars and the Sun from Mars' perspective.

NASA’s Mars orbiters will gather information before, during and after the flyby about the size, rotation and activity of the comet's nucleus, the variability and gas composition of the coma around the nucleus, and the size and distribution of dust particles in the comet's tail.

Observations of the Martian atmosphere are designed to check for possible meteor trails, changes in distribution of neutral and charged particles, and effects of the comet on air temperature and clouds.

MAVEN will have a particularly good opportunity to study the comet, and how its tenuous atmosphere, or coma, interacts with Mars' upper atmosphere.

Earth-based and space telescopes, including Hubble Space Telescope, will also be in position to observe the unique celestial object as well as astrophysics space observatories – Kepler, Swift, Spitzer, Chandra – and the ground-based Infrared Telescope Facility on Mauna Kea, Hawaii.

NASA’s asteroid hunter, the Near-Earth Object Wide-field Infrared Survey Explorer (NEOWISE), has been imaging, and will continue to image, the comet as part of its operations.

Balloon Observation Platform for Planetary Science (BOPPS), a sub-orbital balloon-carried telescope, has already provided observations of the comet in the lead-up to the close encounter with Mars.

Images and updates will be posted online before and after the comet flyby. Several pre-flyby images of Siding Spring, as well as information about the comet and NASA’s planned observations of the event, are available online at: http://mars.nasa.gov/comets/sidingspring 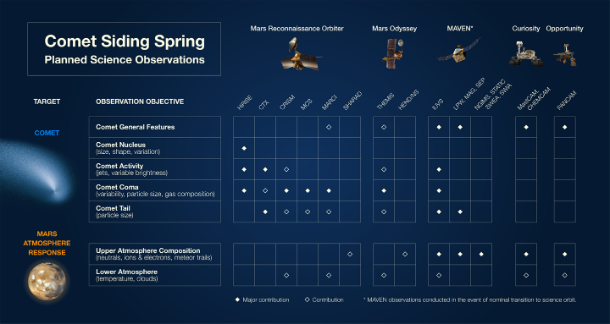 The Mars Reconnaissance Orbiter (MRO) and Mars Odyssey spacecraft as well as MAVEN – the Mars Atmosphere and Volatile EvolutioN mission –  as well as Curiosity and Opportunity rovers will put close eye on Siding Spring's close flyby. India's Mars Orbiter Mission (MOM) will also observe the event. MAVEN should see some great interactions between the Martian atmosphere and the comet's extended gassy atmosphere. Mars Reconnaissance Orbiter's HiRISE camera may be able to actually resolve and determine the shape of the nucleus of the comet! (Credit: NASA/JPL)

The following video is NASA's briefing on Siding Spring's flyby and the space and Earth-based assets that will have extraordinary opportunities to image and study it. (October 9, 2014)

Rapid decrease in brightness as it approaches Mars

According to Matthew Knight (CIOC), Siding Spring may be starting to run low on the exposed ices near the surface that have been driving its activity. This could be because the ices are being depleted or that a layer of dust is building up on top of the ices and is blocking sunlight from reaching them. Also, there may have been a population of icy grains in Siding Spring’s coma that were released at larger distances and survived until now but are starting to disappear due to the increasing heat. Siding Spring may have been in a long, slow outburst over the last few months that is now ending. Another possibility is that the nucleus is breaking up.

Still, we don't know if the comet would fade, stay the same, or brighten. 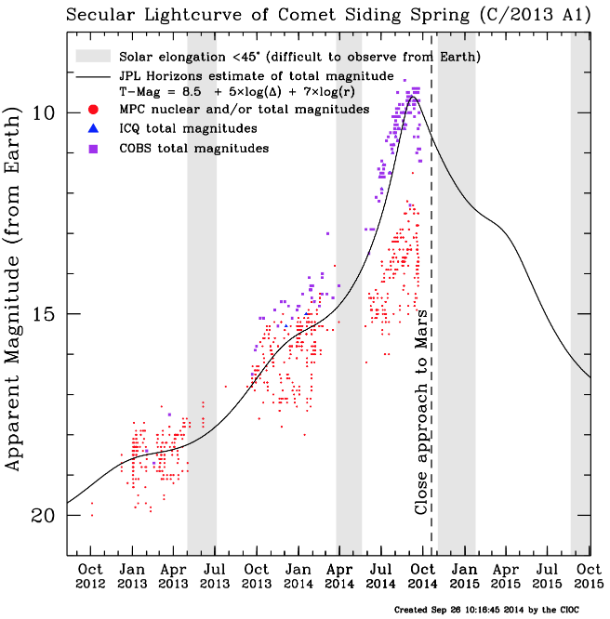