Comet Siding Spring hurtled past Mars at about 56 km/s only 139 000 km away from its surface at 18:27 UTC on October 19, 2014. The period when dust from the comet was most likely to reach Mars and the orbits of spacecraft around Mars peaked about 100 minutes later. According to mission reports from NASA, ESA and ISRO, all 5 spacecraft in its orbit and 2 robots on the surface are in good shape and healthy.

Thanks to the DSN radio-science receiver at Madrid (then Goldstone) ESA said it could follow the Mars Express S-Band beacon practically all the time, including closest approach and comet plane crossing. Despite the very low level of concern, this was quite good to have, Mars Express control said in a report today.

"After flyby, acquisition of signal occurred as planned [at 20:25 UTC], which implicitly confirmed that the spacecraft is operating normally. First systematic checks of spacecraft telemetry were performed for all sub-systems and showed fully nominal behaviour. There are no unexpected events or out-of-limits.

The downlink of the science data has started. The observation programme focused on the atmosphere/ionosphere continues for another two days. The HRSC pictures from the encounter are due for downlink on Thursday [October 23]."

ISRO's Mars Orbiter Mission control tweeted "Phew! Experience of a lifetime. Watched the #MarsComet #SidingSpring whizzing past the planet. I'm in my orbit, safe and sound." 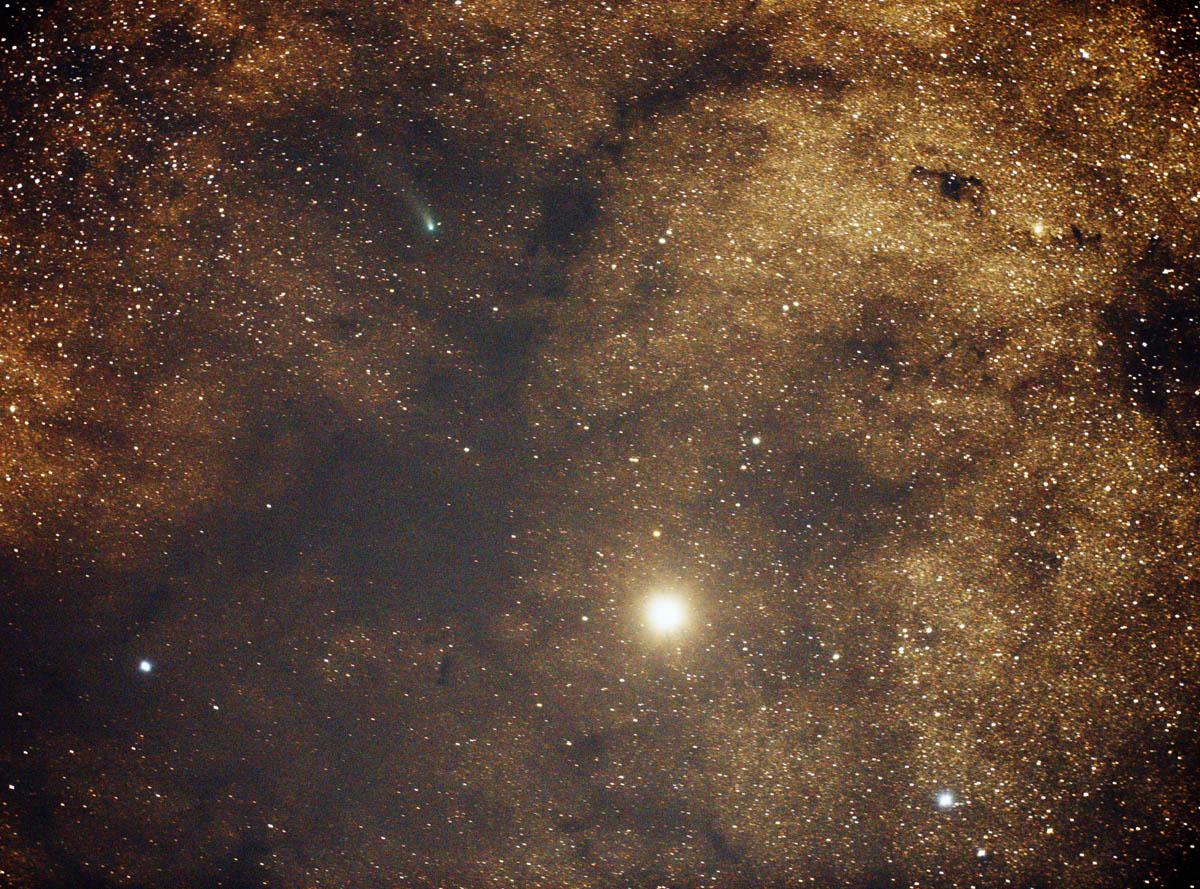 All three NASA orbiters around Mars confirmed their healthy status after each took shelter behind Mars during a period of risk from dust released by a passing comet.

NASA's newest orbiter at Mars, MAVEN, took precautions to avoid harm from a dust-spewing comet and was observing the flyby's effects on the Red Planet's atmosphere.

From about 17:45 to 21:00 UTC MAVEN kept in a defensive posture to reduce its profile relative to the direction from which the comet's high-velocity dust particles would come. In that "hunkered down" orientation, its main antenna was not facing the right way for transmitting to Earth, so communications were maintained at low data rate via a secondary antenna.

Downlink of data has begun from its observations of the comet and Mars' atmosphere. Some observations are designed to provide information about the composition of the gases and dust being released by the comet. Others are investigating possible interaction between material from the comet and the atmosphere of Mars.

Following the critical period of dust flux, the orbiter is communicating at 1.5 megabits per second with NASA's Deep Space Network. It remained on Side A of its two redundant computers, and all subsystems are working as expected.

Downlink of data has begun but the full downlink may take days. High Resolution Imaging Science Experiment (HiRISE), the Compact Imaging Spectrometer for Mars (CRISM), and the Context Camera (CTX) also observed the comet for days before the flyby and will continue to make observations of it in the next few days. The orbiter's other three instruments are being used to study possible effects of gas and dust in the comet's tail interacting with the atmosphere of Mars. These are the Mars Climate Sounder (MCS), the Mars Color Imager (MARCI) and the Mars Shallow Radar (SHARAD).

Objectives of the observing program of MRO are to attempt to image the comet nucleus, to study its surrounding coma of dust and gas, and to search for signatures of that material interacting with the Mars atmosphere. Observations of the comet will continue for another day or so. 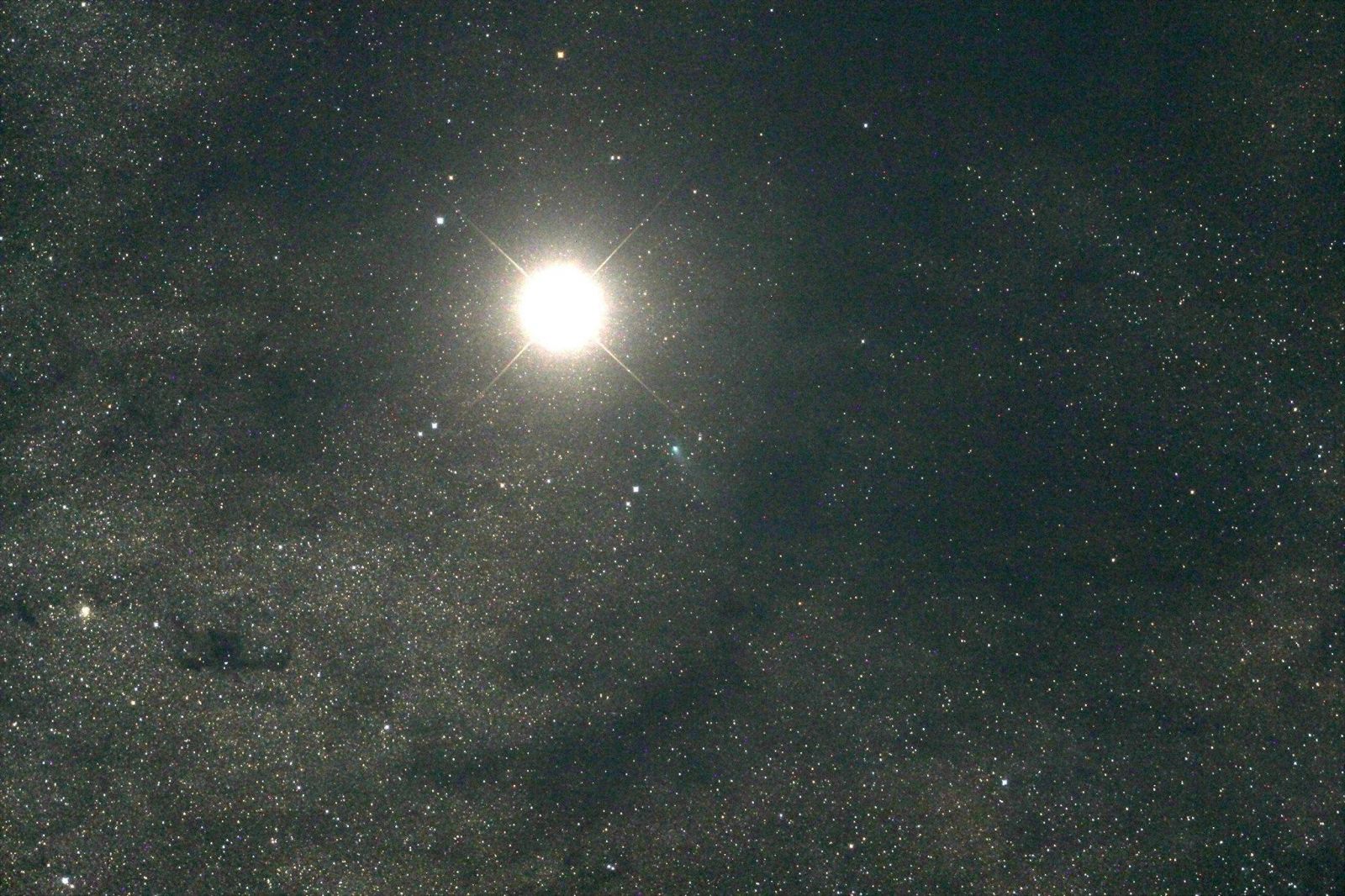 Third NASA's orbiter Mars Odyssey was out of communications with Earth, as planned, while conducting observations of the comet. Odyssey had performed a maneuver on August 5 to adjust the timing of its orbit so that it would be shielded by Mars itself.

"The telemetry received from Odyssey this afternoon confirms not only that the spacecraft is in fine health but also that it conducted the planned observations of comet Siding Spring within hours of the comet's closest approach to Mars," said Odyssey Mission Manager Chris Potts.

Comet Siding Spring observations were made by the orbiter's Thermal Emission Imaging System (THEMIS). Resulting images are expected in coming days after the data is downlinked to Earth and processed. THEMIS is also scheduled to record a combined image of the comet and a portion of Mars later this week. In addition, the Odyssey mission is using the spacecraft's Neutron Spectrometer and High Energy Neutron detector to assess possible effects on Mars' atmosphere of dust and gas from the comet. 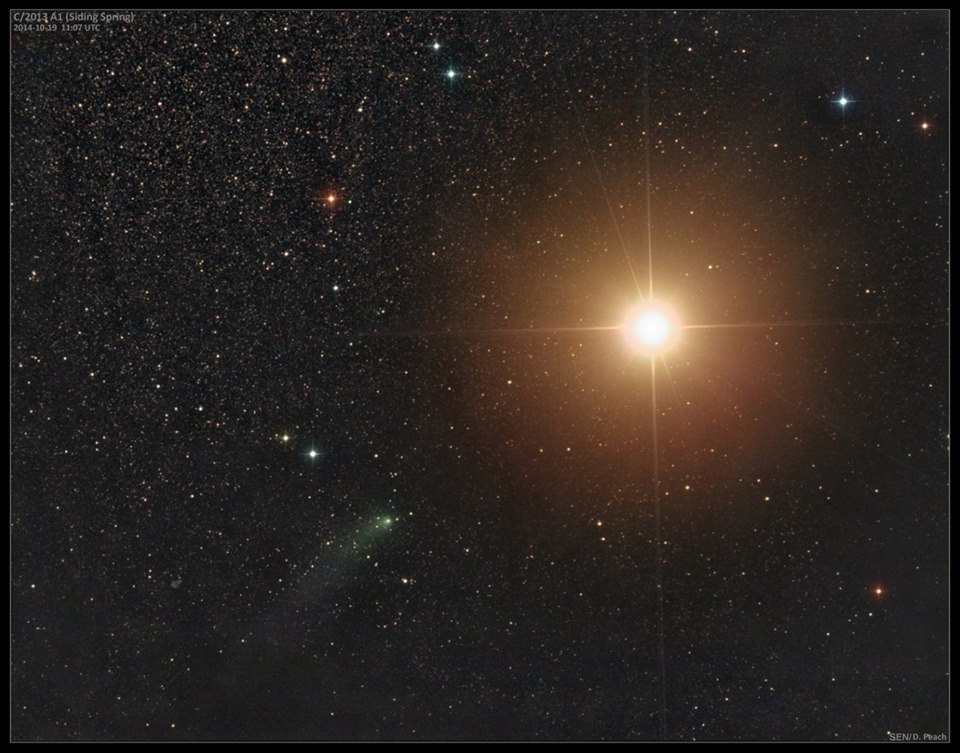 Comet Siding Spring alongside Mars on October 19, 2014 by Damian Peach. "Seen here several hours prior to its closest point to Mars, the massive brightness difference between comet and planet is very apparent. I'm sure the Martians must be enjoying an impressive sight." Image copyright SEN/D. Peach