Seismic activity at Iceland's Bardarbunga volcano is still high, the eruption at Holuhraun continues and the Aviation Colour Code for the volcano remains at ‘Orange’. The European Geosciences Union (EGU) warned this morning that strong jet stream could take Holuhraun SO2 to the UK/EU over the next 24 hours.

Due to dangerous levels of gas emissions, scientists have been forced to evacuate the Holuhraun area several times since the eruption began and cautioned to keep gas masks handy due to noxious gases and shifting winds.

The plume from Holuhraun is rich with sulfur dioxide (SO2), a rotten-smelling gas that can cause respiratory problems in humans and animals. SO2 is a gas with a pungent odor that irritates skin and the tissues and mucous membranes of the eyes, nose, and throat. Sulfur dioxide chiefly affects upper respiratory tract and bronchi.

The effects of SO2 on people and the environment vary widely depending on  the amount of gas a volcano emits into the atmosphere and the regional or global wind and weather pattern that disperses the gas.

A model for SO2 dispersion (based on Calpuff) is being developed by Icelandic Met Office (IMO). Trial runs are available but users are encouraged to read the disclaimer.

People who feel discomfort are advised to stay indoors, close their windows, turn up the heat and turn off air conditioning. Use periods of good air quality to ventilate the house. People experiencing adverse effects should be in immediate contact with their healthcare center. Measurements of local air quality can be found on the webpage www.airquality.is 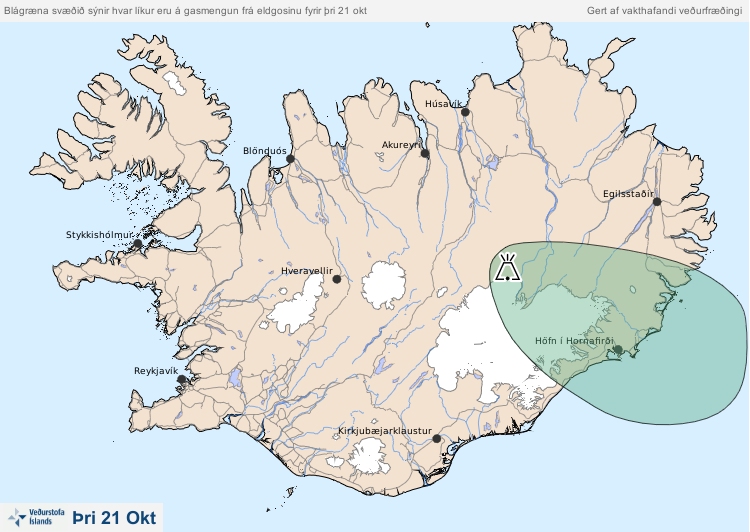 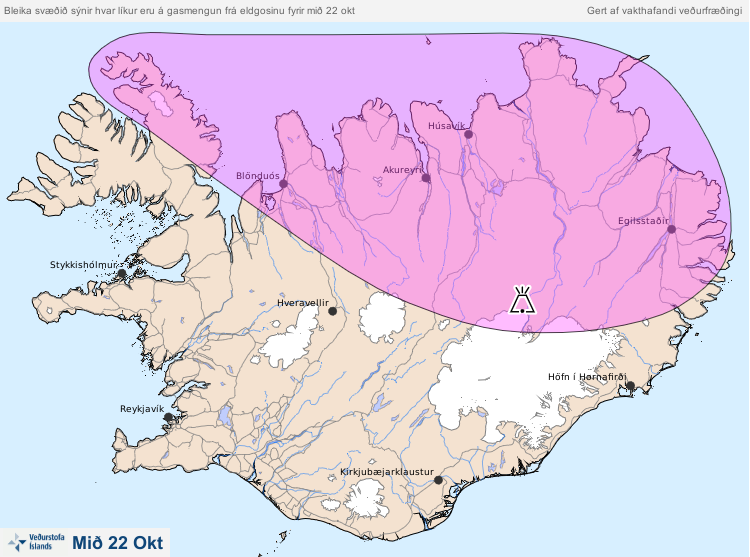 Seismic activity in the Bárðarbunga system and volcanic activity at the eruption site in Holuhraun has been comparable to recent days, according to latest IMO's status update for Bardarbunga issued at 10:00 UTC today.

"During the last 24 hours around 70 earthquakes have been detected around the Bárðarbunga caldera rim, the strongest was magnitude 5.3 at 08:36 this morning on the northern rim. The event was preceded by a magnitude 4.7 in the same area just two minutes before. Four additional events exceeded magnitude 4 since the last report yesterday.

12 events were in the range of magnitude 3.0 – 3.9. The subsidence of the caldera continues at similar rates as the days before, no obvious step in subsidence was observed for the M5.3 earthquake this morning. Earthquake rates in the dyke intrusion are rather low, around 20 events have been detected in the last 24 hours, the strongest one was magnitude 1.4 yesterday at 23:31 UTC. All events in the dyke were located between the northern part of Dyngjujökull and the eruption site in Holuhraun.

The eruption continues, visibility on webcams was limited this morning due to weather."

According to latest notes from the Scientific Advisory Board held on Monday, October 20, 2014, seismic activity in Tungnafellsjokull glacier had decreased but activity in Bardarbunga is still strong.

"At 9:40 UTC on Saturday morning an M5.4 earthquake was measured in northern Bardarbunga, making it one of the biggest earthquakes that have been measured since the activity started. Over the last two days nine other earthquakes bigger then M4.0 were recorded in Bardarbunga.

The GPS station in the centre of Bardarbunga show that the subsidence of the caldera continues with similar rate as before.

No change was detected in water monitoring that cannot be explained by changing weather."

The next meeting of Scientific Advisory Board will be held on Wednesday, October 22, 2014. Notes from the meeting should be available early Wednesday afternoon. 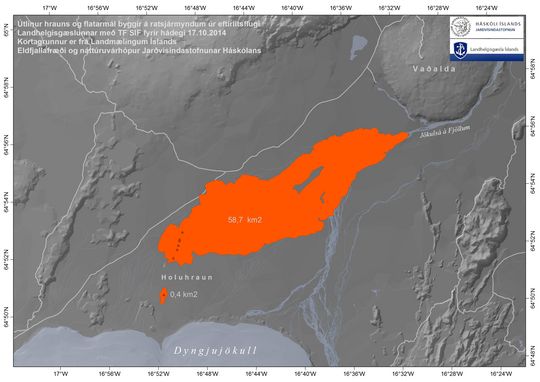 Radar images from a surveillance flight on October 17, 2014 provide a base for lava field measurements. Image credit: Institute of Earth Sciences. 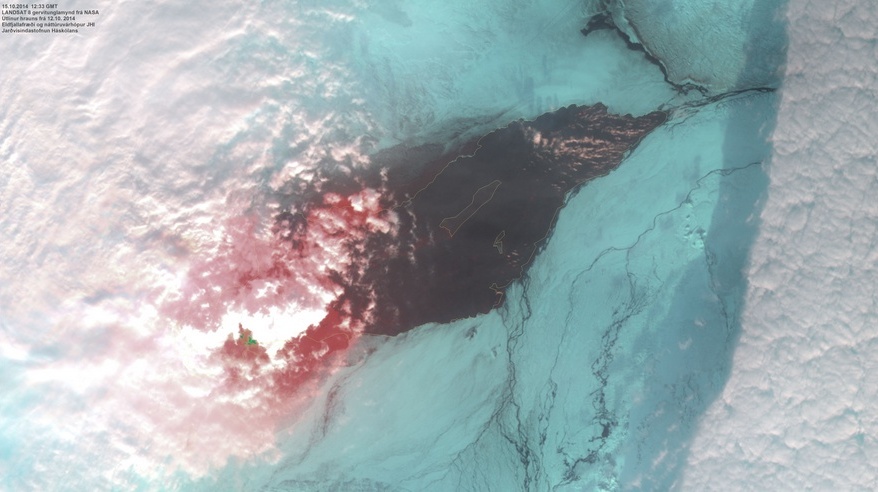 A LANDSAT 8 false colour image from NASA taken on October 15 can be helpful in distinguishing new advances. The lava outlines are from October 12 (yellow lines) but a new lava stream has protruded southwards and the lava field has extended towards north.

Lower photo of Holuhraun fissure seen from the west was taken on September 28 but the top one is from October 15. Notice the increased height of central and souther section of the rampart. 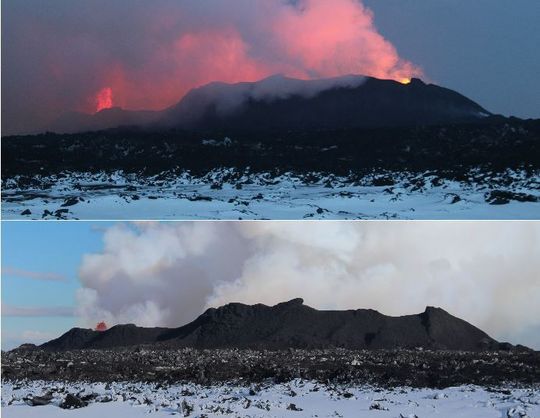