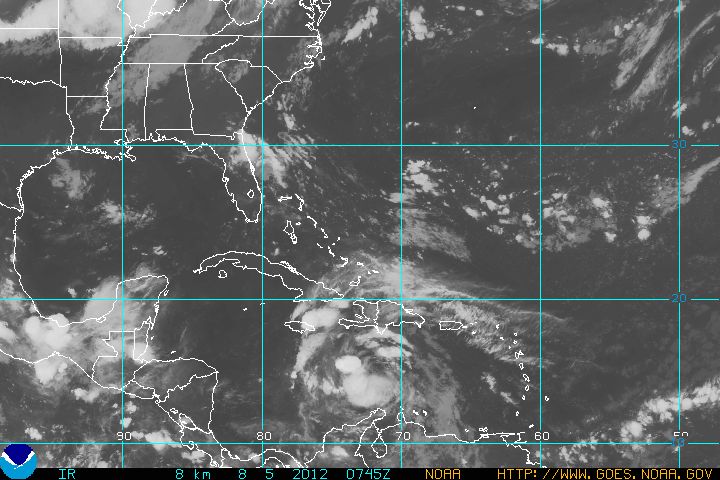 Tropical Storm Ernesto came across open waters on Saturday, August 4, 2012 on a projected path that would skirt Jamaica and hit Mexico after dumping heavy rain on islands in the eastern Caribbean.

The U.S. National Hurricane Center said Ernesto is expected to roll south of Jamaica as a hurricane Sunday evening, August 5, 2012. The forecast would carry it into the coastal resorts of Mexico’s Yucatan Peninsula as a Category 1 hurricane on Wednesday, August 8, 2012.

The government of Honduras has also issued a Tropical Storm Watch for the coast of Honduras, from the Hondura/Nicaragua border westward to Punta Castilla.

Long lines formed at grocery stores in the Jamaican capital of Kingston as people bought water, bread and canned goods. The Jamaican government ordered fishermen who live in outlying cays to evacuate and head to the main island. The storm is expected to pass close to Pedro Cays on Sunday evening, according to the local Meteorological Service Office.

For the north Atlantic…CARIBBEAN Sea and the Gulf of Mexico…

A trough of low pressure located inland over northern Florida
continues to produce disorganized showers and thunderstorms
extending from northeastern Florida eastward for a couple hundred
miles. Development of this system is not expected as it is
anticipated to move farther inland across northern Florida over the
next day or so. This system has a low chance…NEAR 0 percent…OF
becoming a tropical cyclone during the next 48 hours. Locally heavy
rain and gusty winds are possible across portions of the Florida
peninsula today.

A new tropical storm, Florence, was formed further out in the Atlantic. It had maximum sustained winds of 45 mph (75 kph) yesterday and was about 415 miles (665 kilometers) west of the Cape Verde Islands. The National Hurricane Center said it was not expected to reach hurricane force as it marches generally westward. By latest NWS National Hurricane Center advisory Florence had stopped strengthening.