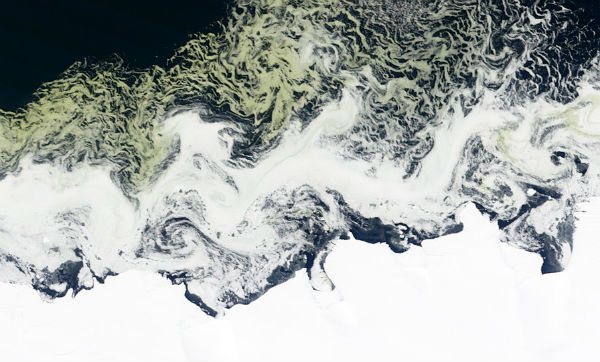 A few weeks ago, NASA’s Terra satellite flew over East Antarctica and detected swirls of green amidst the ice off the Princess Astrid Coast. For three weeks since, scientists have been trying to figure out what Terra saw in this remote region of the world’s most remote continent. The size of the bloom is estimated to be 200 kilometres (E-W) by 100 kilometres (N-S). Its colour is so rich that it is easily visible from space. Green shading in an otherwise blue ocean usually indicates a bloom of phytoplankton, plant-like organisms that turn sunlight into biomass. Phytoplankton is the center of the ocean food web, feeding everything from krill to penguins to whales. 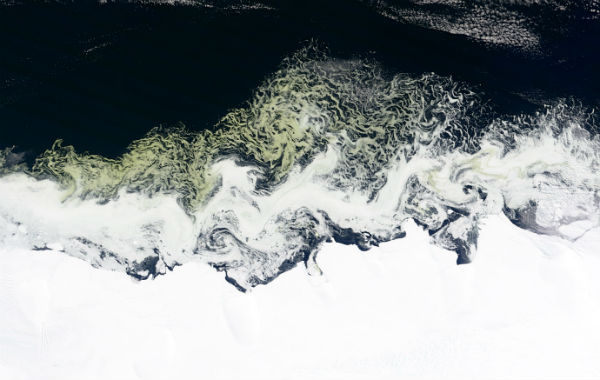 So what are we looking at on this image?

Stanford University marine biologist Kevin Arrigo—who led NASA’s ICESCAPE research ship expeditions in 2010 and 2011—was skeptical of blooming ocean. It doesn’t look like a phytoplankton bloom to him. He explain that the spatial pattern resembles the sea ice too closely. He points that it’s very late for such a bloom in the Antarctic. According to him it looks suspiciously like green sea ice.

Oscar Schofield, a biological oceanographer at Rutgers University, had his own long-distance interpretation. He suggest that this could be an ice edge bloom, though it is unlikely we can say what species. He points that ice edge blooms are not unusual there, though it is late in the season.

Researchers at the Antarctic Climate and Ecosystems Cooperative Research Center previously examined the MODIS image and declared on their website: “Wind blowing snow off the Amery Ice Shelf in East Antarctica appears to have released nutrients which have triggered a massive algal bloom (believed to be phaeocystis).”

Jan Lieser, a scientist with that Australian research group, added that he witnessed this bloom in East Antarctica at about the same time. The largest single patch was in the Cape Darnley region, between the Amery Ice Shelf and Mawson Station. He also saw smaller blooms to the west of the West Ice Shelf and off the Mertz Glacier region in recent weeks. Blooms are not unusual in Antarctica and have been reported before, but usually at a different time of year (early December). Lieser’s colleagues were in a position to be able to redirect the Australian vessel Aurora Australis to take a few surface water samples of the bloom when she was on return mission from Mawson Station to Hobart, Tasmania. Reports from the ship as it was sampling and traversing through the bloom indicate that the region was covered by small pancakes of sea ice with algae visible on the sides and undersides, apparently floating in a sea of greenish brown. The samples were due back in Hobart by late March.

The green waters off Antarctica this February might have been phytoplankton blooming in the water, adhering to the edges of the ice, or growing on top of the ice altogether. Perhaps there could have even been a different explanation that did not include life at all. But until someone could sample the water and ice directly, it would be difficult to know for sure. (EarthObservatory)