A storm packing heavy rain and gusty winds lashed southern Sri Lanka over the weekend, killing at least 19 and leaving 43 fishermen missing, the island's disaster management centre said Sunday. More than 53,000 people were also forced out of their damaged homes in the southern areas of the country following two days of heavy winds and rain, the centre said in a statement.

It said 41 people who escaped with injuries were admitted to hospitals while the authorities were looking for any survivors among fishermen who were reported missing. About 5,700 houses were also damaged. 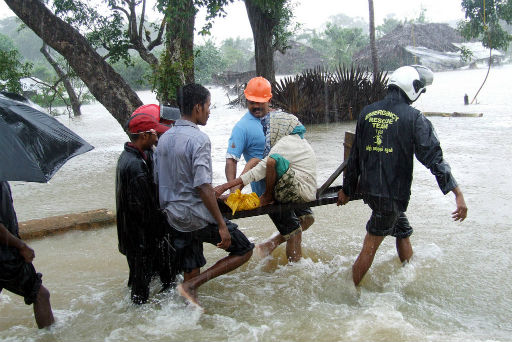 Sri Lanka depends on monsoon rains for irrigation and power generation, but the seasonal downpours frequently cause death and property damage. (TerraDaily)

Up to 38 homes and 83 people were evacuated in southern Manitoba on Wednesday night, July 1, 2020, as the Rivers Dam hit its highest level in a "once-in-1 000-year" event, said Infrastructure Minister Ron Schuler. The incident was unprecedented and...

A bright fireball streaked across Japan's capital Tokyo at 17:32 UTC on July 1, 2020 (02:32 JST, July 2). Many people reported hearing a sonic boom minutes after the meteor exploded, which is considered rare, according to the National Astronomical Observatory....

The flood situation remains grim in Assam, northeast India, with more than 1.4 million people already affected as of Thursday, July 2, 2020. Six more fatalities due to flooding were reported on Wednesday evening, July 1, adding to the death toll of 33; casualties...

Given current data analysis, Sakurajima volcano in southwestern Japan may erupt on a large scale -- a weather agency panel warned on Tuesday, July 1, 2020. According to the panel on the forecast of volcanic activities at the Japan Meteorological Agency (JMA), the...

Puerto Rico's governor has declared a state of emergency on Monday, June 30, 2020, due to worsening drought-- prompting the government to resort to water rationing that will leave 140 000 without access to running water. Drought conditions have rapidly expanded...

Wildfires in Siberia have grown five-fold over the past week amid an unprecedented heatwave, according to Russia's forest fire aerial protection service. This came after the town of Verkhoyansk hit 38 °C (100.4 °F), marking the hottest-ever temperature...