A new study of tectonic plate boundaries may help scientists understand how earthquakes happen. The work by researchers including Dr Giampiero Iaffaldano from the Australian National University focused on the Nazca plate, which plunges beneath the continental South American plate. Researchers study the Nazca plate because the unusual curvature where the plates meet is reflected in the shape of the nearby Andes mountain range.

Reporting in the journal Tectonophysics, researchers found a link between the shape of plate margins and the forces they exchange with each other. They also  found that at least 20 per cent of the force driving plate tectonic movement needed to be traded between the two plates to create the unique shape seen at Nazca. 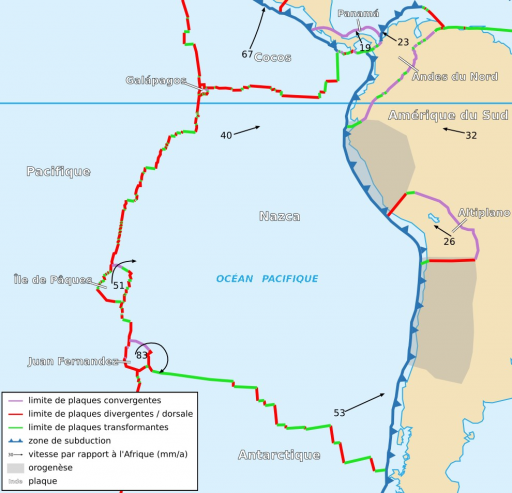 The researchers simulated the collision between the Nazca and South America plates in their laboratory using layers of silicon putty plunging into big tanks of glucose syrup. The mechanical properties of certain materials allowed them to mimic the mechanical properties of tectonic plates on small scales and time periods. Researchers point that they understand the movements involved but want to better understand the forces driving these movements.

15 major tectonic plates covers Earth's crust, which are in constant motion due primarily to heat convection through the mantle from deep within the planet. Earthquakes and volcanic eruptions are symptomatic of these tectonic plate movements, they occur at plate boundaries. 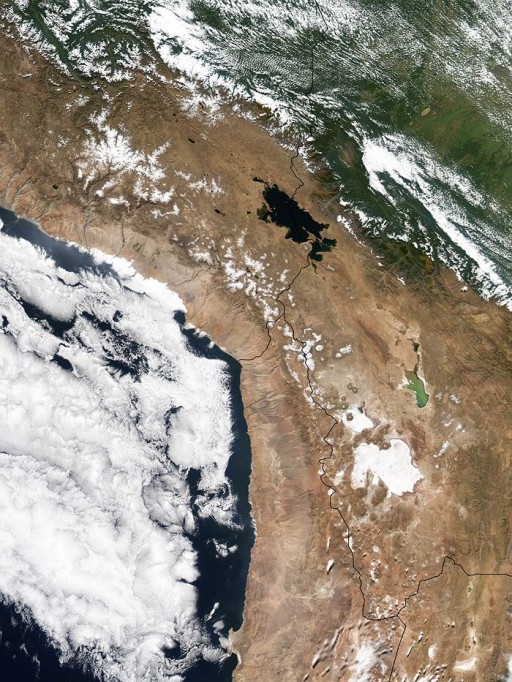 "The Nazca plate subducts under the South American continental plate, in a prime example of relatively young convergent motion, where mountain building is going on," Dr Giampiero Iaffaldano  says.

According to Iaffaldano, the curved shapes of plate margins are useful and precise diagnostics because they show the degree of coupling between tectonic plates. He believes the findings could help unravel the impact of plate interactions on large earthquakes and volcanic eruptions. These forces are responsible for deformation of the Earth's crust, the rise of large mountain chains and ultimately the seismic behaviour of plate margins, so it is of paramount importance to understand their magnitude. (ABC.net) 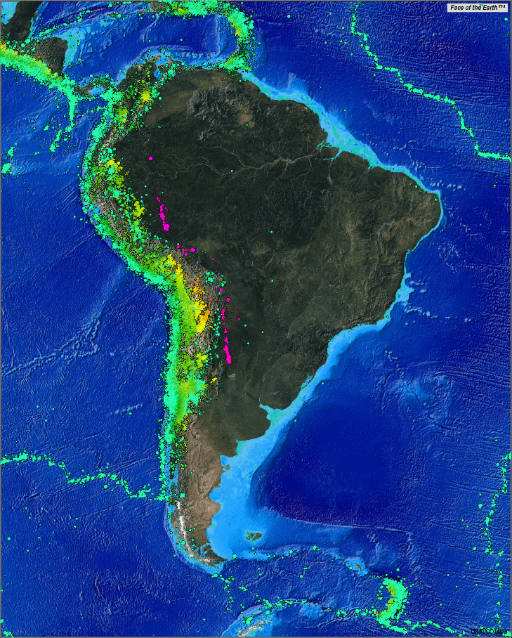 The Nazca Plate is an oceanic tectonic plate in the eastern Pacific Ocean basin off the west coast of South America. The ongoing subduction along the Peru-Chile Trench of the Nazca Plate under the South American Plate is largely responsible for the Andean orogeny. The Nazca Plate is bound to the west to the Pacific Plate and to the south with the Antarctic Plate through the East Pacific Rise and the Chile Rise respectively. The movement of the Nazca Plate over several hotspots has created some volcanic islands as well as east-west running seamount chains that subduct under South America. Nazca is a relatively young plate both in terms of age of rocks and existence as independent plate.

The absolute motion of the Nazca Plate has been calibrated at 3.7 cm/yr east motion (88°), some of the fastest absolute motion of any tectonic plate. The subducting Nazca Plate, which exhibits unusual flat-slab subduction, is tearing as well as deforming as it is subducted (Barzangi and Isacks). The subduction has formed, and continues to form, the volcanic Andes Mountain Range. Deformation of the Nazca Plate even affects the geography of Bolivia, far to the east (Tinker et al.). It was on the Nazca Plate that the 1994 Bolivia earthquake occurred, measuring a magnitude MW of 8.2 and the strongest earthquake occurring deeper than 300 km.

Luckily, very few islands are there to suffer the earthquakes that are a result of complicated movements at these junctions. Juan Fernández Islands is an exception. (Wikipedia) 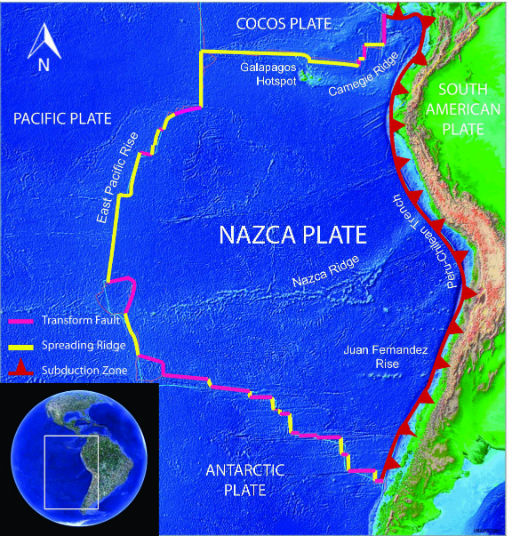 The South America arc extends over 7,000 km from the Chilean margin triple junction offshore of southern Chile, north along the western coast of South America, to its intersection with the Panama fracture zone offshore the south coast of Panama in Central America. It marks the plate boundary between the subducting Nazca plate and the South America plate, the region where the oceanic crust and lithosphere of the Nazca plate begin their descent into the mantle beneath South America. The convergence associated with this subduction process is responsible for the uplift of the Andes Mountains, and for the active volcanic chain present along much of this deformation front. Relative to a fixed South America plate, the Nazca plate moves slightly north of eastwards at a rate varying from approximately 80 mm/yr in the south to approximately 70 mm/yr in the north.

Subduction zones such as the South America arc are geologically complex and generate numerous earthquakes from a variety of tectonic processes that cause deformation of the western edge of South America. Crustal deformation and subsequent mountain building in the overriding South America plate generate shallow earthquakes. Slip along the dipping interface between the two plates generates frequent and often large interplate earthquakes between depths of approximately 10 and 50-60 km.

Since 1900 numerous magnitude 8 or greater earthquakes have occurred on the interface between the Nazca and South America plates, including the 1960 M9.5 earthquake in southern Chile, the largest instrumentally recorded earthquake in the world. Earthquakes can also be generated to depths greater than 600 km from internal deformation of the subducting Nazca plate. Although the rate of subduction varies little along the entire subduction zone, there are complex changes in geologic processes along the subduction zone that dramatically influence volcanic activity, earthquake generation and occurrence. For example, an extended zone of crustal seismicity in central-northern Argentina highlight a well-known flat-slab region of this subduction zone, where the Nazca plate moves horizontally for several hundred kilometers before continuing its descent into the mantle. This transition in slab structure is coincident with a marked break in the Andes volcanic chain.(USGS)