The first ancient oceanic microplate has been discovered in the Indian Ocean by a team of Australian and US scientists. The discovery helped in identifying the timeline in which the initial collision between India and Eurasia has taken place, an event which gave birth to the Himalayas Mountain Chain, the University of Sydney announced on November 9, 2015.

The radar beam images from an orbiting satellite, which measure the change in sea surface level caused by the water being attracted by submarine mountains and valleys, in combination with conventional marine geophysical datasets, have helped scientists in uncovering the first microplate in the Indian Ocean. The large collision between India and Eurasia, the timing of which had scientist puzzled for quite some time, has been estimated to had happened 47 million years ago, according to the newest discovery. 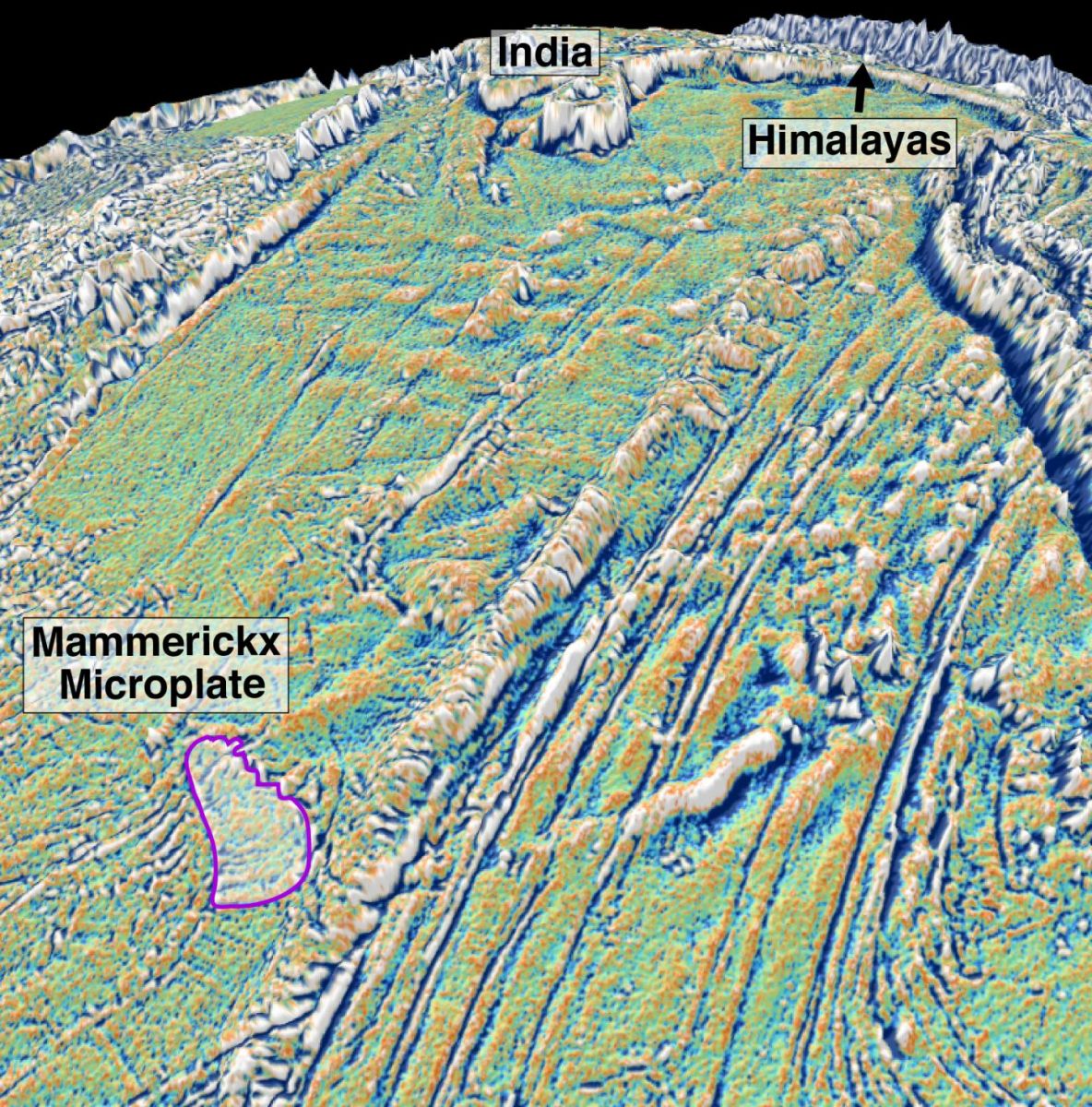 A team of experts, led by the researchers of the University of Sydney's School of Geosciences, have come to conclusion that crustal stresses caused by the initial collision have cracked the Antarctic Plate far from the collision zone while breaking off a fragment the size of Tasmania.

The discovered microplate was named the Mammerickx Microplate, after Dr. Jacqueline Mammerickx, a well known pioneer in the field of seafloor mapping.

The microplate has been revealed by its rotating pattern of grooves and hills of the ocean floor landscape, the so-called abyssal hills, which have recorded a sudden increase in crustal stress dating back to the birth of the Himalayas Mountain Range. This finding indicates how stressed the Indian Plate had become when its northern edge first collided with Eurasian Plate.

According to the newest discovery, India was traveling northwards about 15 cm (0.5 feet) annually about 50 million years ago. Shortly after it hit Eurasia, crustal stresses along the mid-ocean ridge between India and Antarctica have intensified to a breaking point and a part of Antarctica's crust broke off rotating and forming the microplate.

"The age of the largest continental collision on Earth has long been controversial, with age-estimates ranging from at least 59 to 34 million years ago. Knowing this age is particularly important for understanding the link between the growth of mountain belts and major climate change," lead author Dr Matthews said.

"Dating this collision requires looking at a complex set of geological and geophysical data, and no doubt discussion about when this major collision first started will continue, but we have added a completely new, independent observation, which has not been previously used to unravel the birth of this collision," Professor Müller, the co-author of the study said.

"It is beyond doubt that the collision must have led to a major change in India’s crustal stress field – that’s why the plate fragmentation we mapped is a bit like a smoking gun for pinning down the collision age."

Despite a huge advancement in science which allowed the experts to map distant worlds and planets, about 90% of the seafloor of our oceans remains uncharted, according to Professor Sandwell from the Scripps Institution of Oceanography, another study co-author: "We have more detailed maps of Pluto than we do of most of our own planet because about 71 per cent of the Earth's surface is covered with water."

"Roughly 90% of the seafloor is uncharted by ships and it would take 200 ship-years of time to make a complete survey of the deep ocean outside continental shelves, at a cost of between two- to three billion US dollars. That’s why advances in comparatively low-cost satellite technology are the key to charting the deep, relatively unknown abyssal plains, at the bottom of the ocean."

Despite the numbers, this significant discovery undoubtedly brings the scientists one step closer to achieving the goal of understanding the inner workings of our own planet.