An international team of geologists have proposed a new answer to a long standing question how plate tectonics started on Earth in the first place. They were able to demonstrate how the first sinking of litospheric plates, which is a key process of plate tectonics, occurred on the large scale, German research center for Geosciences in Potsdam announced on November 12, 2015.

Our planet is the only planet of our Solar System that possesses plate tectonics, as its surfaces is adept to constant change while tectonic plates constantly slide along one another together with the oceans, collide or sink into the Earth's mantle. A team of scientists from the ETH Zürich, the GFZ German Research Center for Geosciences, the University of Texas and Korea University in Seoul have worked to determine the exact cause of the process.

The scientists have combined high-resolution numerical modelling and geological observations to show that a hot plume rising to the litosphere from the deep mantle might have triggered the first large-scale subduction of tectonic plates.

Earth's litosphere is divided into several plates which slide along their boundaries, collide with each other or sink into the deep mantle depending on their temperature. This process of subduction a key to plate tectonics mechanism, and is responsible for recycling the materials of Earth's crust into the deep mantle for an efficient cooling of the Earth interior. 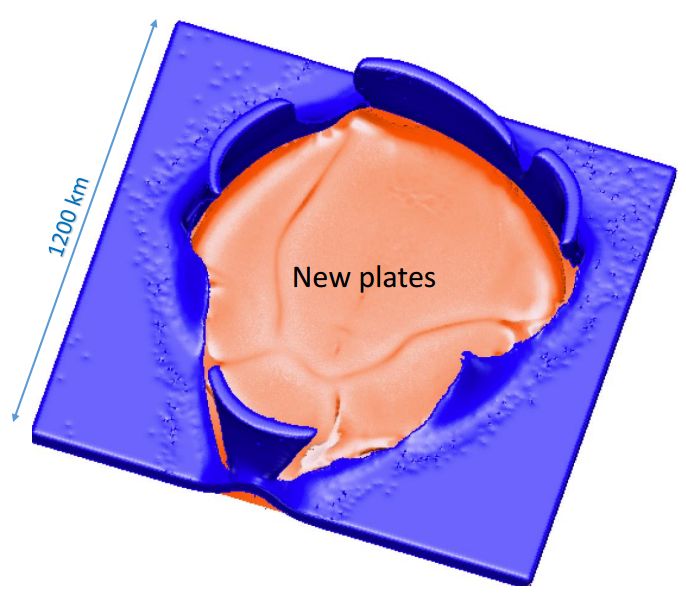 View from the deep Earth of the broken outer shell of the early Earth (blue) and forming of new lithospheric plates (red) as a result of mantle plume-lithosphere interaction in a 3D numerical model. Image credit: GFZ

The plate tectonics didn't take place during the first 1 or 2 billion years of Earth's history, as the litosphere was not broken into plates and the subduction wasn't possible.

"Three conditions must have been met for the mantle plume to start first long-lived subduction and Plate Tectonics on Earth. First, the mantle plume had to be large and hot enough to produce a lot of melt. These melts intruded into the lithosphere above the plume making it mechanically weak and allowing the plume to penetrate into the crust. Second, the lithosphere had to be thick and heavy enough to sink into the mantle," said Stephan Sobolev, Head of Geodynamic Modeling Section at GFZ and Professor of Geodynamics at University of Potsdam.

The broken parts of litosphere around the plume have most likely been pushed down by the load of the plume material spreading above it while the sinking parts of the heavy litosphere have pulled down the adjacent litosphere: "Finally there had to be liquid water in the ocean to lubricate, in a way, the surface of the sinking lithospheric plate. This allowed it to sink deep into the Earth," added Sobolev.

These conditions had apparently not been met on other planets of the Solar System, not even on Venus, the litosphere of which is too hot and light with no liquid water.

Most likely the cause of plate tectonics was not only an interaction of a single plume with the early Earth litosphere, but a number of such interactions. The intensity of Earth's inner workings has created a number of "plate tectonic windows" which joined after some time and triggered the process on a global scale.