Heavy rainfalls triggered severe flooding in Tamil Nadu state, India since a tropical depression reached its coasts on November 9, 2015. At least 48 people have been reported dead by late November 13.

A strong tropical depression developed over the Bay of Bengal on November 8 brought torrential downpours and strong winds to large portions of Tamil Nadu state.

The city of Chennai reported flooded streets and traffic disruptions across the affected areas. 123 mm (4.8 inches) of rainfall was observed at Madras, Minambakkam in a 24 hour period between November 12 and 13. The same area reported 187 mm (7.4 inches) of precipitation between November 10 and 11, while 207 mm (8.1 inches) was observed in Cuddalore, 147 mm (5.8 inches) in Nagapattinam and 183 mm (7.2 inches) in Karaikal at the same time, according to World Meteorological Organization (WMO). 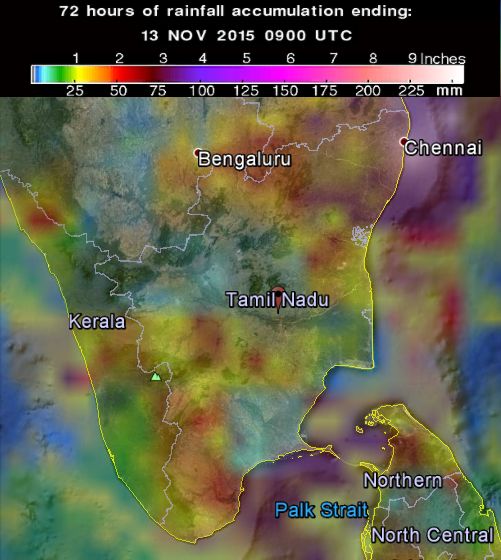 At least 27 people died in severe weather related incidents in Cuddalore district, as of November 12, according to Tamil Nadu Chief Minister J. Jayalalithaa, although some reports claim there are as many as 40 deaths so far.

No good news seems to be in sight for the flood stricken areas yet, as a another tropical depression is expected to affect southern India, according to India's Meteorological Department (IMD). Abundant rainfall up to 244 mm (9.6 inches) will affect parts of Rayalaseema, Kerala, coastal Andhra Pradesh, Puducherry and Tamil Nadu between November 13 and 17.

Even higher amounts of precipitation could affect local areas of coastal Andhra Pradesh, Puducherry and Tamil Nadu from November 16 to 17.