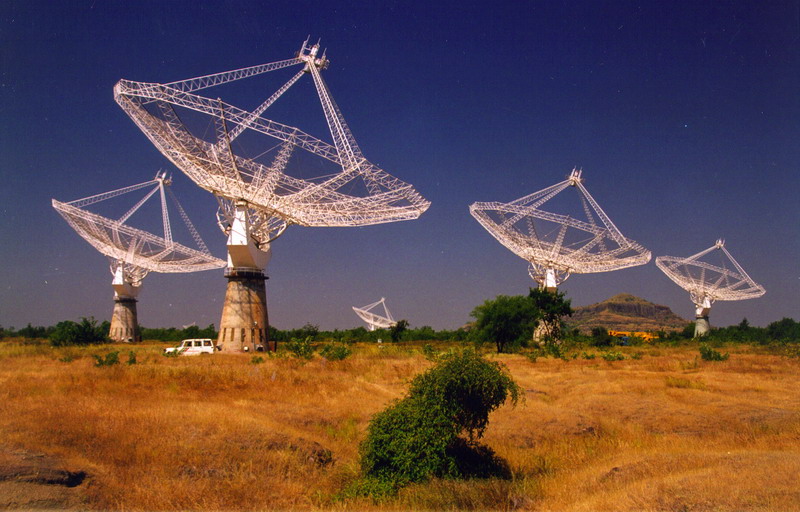 Astronomers from Pune, India have discovered a massive radio galaxy using the Giant Meterwave Radio Telescope (GMRT). Such large radio galaxies have been rarely located so far. The galaxy is located approximately 9 billion light years away from Earth in the constellation Cetus and extends to a phenomenal 4 million light years in size. What makes this discovery unique, apart from its size, is the fact that the galaxy is considered to be in its "dying" phase.

A group of astronomers led by Prathamesh Tamhane, a student at the Indian Institute of Science Education and Research discovered the giant radio galaxy (GRG) using the GMRT observations with previous observations made with a slew of international ground and space based telescope facilities—XMM-Newton Space Telescope in X-ray, the Japanese Subaru telescope in optical, UK’s Infrared Telescope in near-infrared, NASA’s Spitzer Space Telescope in mid-infrared and the Jansky Very Large Array(USA) in high frequency radio bands. Combining data from the above mentioned telescopes spread across the electromagnetic spectrum, the researchers were able to carry out an in-depth analysis of this remote and massive galaxy.

The newly discovered Giant Radio Galaxy (GRG) has been named the  J021659-044920 and details regarding the discovery and associated research have been published in the journal Monthly Notices of the Royal Astronomical Society (MNRAS) on November 1, 2015.

an optical image with radio lobes (in yellow-red). The supermassive black hole in the red galaxy at the centre (zoomed in inset) has led to the formation of the giant radio lobes. Image credit: Prathamesh Tamhane/Yogesh Wadadekar

While radio galaxies of less than a million light years in size are very common, Giant Radio Galaxies (GRGs) like J021659-044920 are extremely rare, especially at such great distances. The radio emissions produced by such galaxies are presumed to originate from the supermassive black holes at their center. These supermassive black holes are known to emit large scale jets of hot plasma in diametrically opposite directions which eventually give rise to large radio lobes (see the above image) which travel massive distances and can be detected as radio waves. Supermassive black holes are commonly found at the center of most galaxies and are also known as Active Galactic Nuclei (AGN).

What makes this discovery so unique is that when the researchers looked to the source of the radio waves, they found no evidence of any Active Galactic Nuclei (AGNs), jets or hotspots. This indicates that J021659-044920 is in its dying phase. In fact, since the galaxy is so far away and what is being observed was emitted nearly 9 billion years ago, it is feasible that the galaxy's central black hole may have stopped producing plasma completely and its radio lobes may have faded out long ago, but their light is only now reaching Earth. ​The low frequency GMRT is extremely useful in the study and identification of such dying radio objects in space.

The GMRT is the largest low radio frequency telescope facility in the world. It features an array of 30 completely maneuverable, 45 meter (147.63 feet) diameter antennas, spread out over a 30 km (18.64 miles) region around Khodad, near the Narayangaon town of Pune district in western India. The GMRT was built by the National Centre for Radio Astrophysics of the Tata Institute of Fundamental Research and has been in operation since 2002.