A UCLA scientist has discovered that the geological phenomenon known as “plate tectonics”, which involves the movement of huge crustal plates beneath a planet’s surface, also exists on Mars. An Yin, planetary geologist and a UCLA professor of Earth and space sciences and the sole author of the new research points that Mars is at a primitive stage of plate tectonics. It gives us a glimpse of how the early Earth may have looked and may help us understand how plate tectonics began on Earth.

Yin made the discovery during his analysis of satellite images from THEMIS (Thermal Emission Imaging System), an instrument on board the Mars Odyssey spacecraft, and from the HIRISE (High Resolution Imaging Science Experiment) camera on NASA’s Mars Reconnaissance Orbiter. He analyzed about 100 satellite images — approximately a dozen were revealing of plate tectonics. 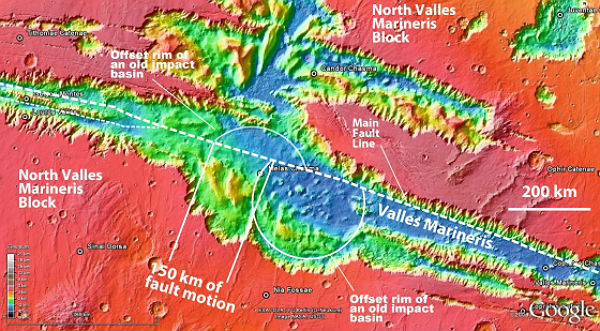 Yin has conducted geologic research in the Himalayas and Tibet, where two of the Earth’s seven major plates divide. Yin saw a very smooth, flat side of a canyon wall, which can be generated only by a fault, and a steep cliff, comparable to cliffs in California’s Death Valley, which also are generated by a fault. Mars has a linear volcanic zone, which Yin said is a typical product of plate tectonics. These features can’t be seen anywhere else on other planets in our solar system, other than Earth and Mars.

The surface of Mars contains the longest and deepest system of canyons in our solar system, known as Valles Marineris. It is nearly 2,500 miles long — about nine times longer than the Earth’s Grand Canyon. Scientists have considered it to be just a big crack that opened up. Yin claims that it’s a plate boundary, with horizontal motion. That is kind of shocking, but the evidence is quite clear. Yin said the shell is broken and is moving horizontally over a long distance. It is very similar to the Earth’s Dead Sea fault system, which has also opened up and is moving horizontally.

Mars has landslides, and Yin said a fault is shifting the landslides, moving them from their source.

Yin still don’t understand why the plates are moving with such a large magnitude or what the rate of movement is. The rate is much slower than on Earth. Yin is very confident in his findings, but mysteries remain, he said, including how far beneath the surface the plates are located.

The Earth has a broken shell with seven major plates; pieces of the shell move, and one plate may move over another. Yin is doubtful that Mars has more than two plates. 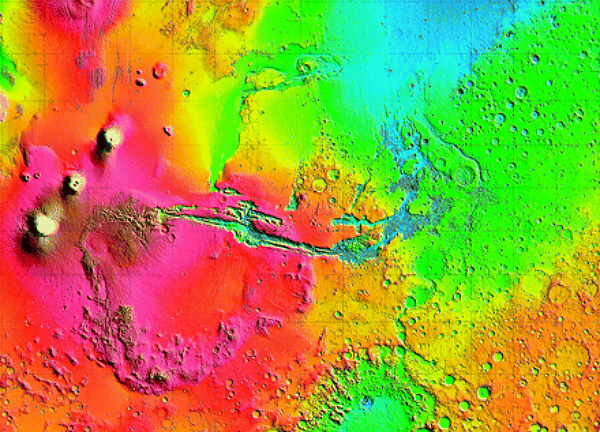 Most of our current knowledge about the geology of Mars comes from studying landforms and relief features (terrain) seen in images taken by orbiting spacecraft. Mars has a number of distinct, large-scale surface features that indicate the types of geological processes that have operated on the planet over time. This section introduces several of the larger physiographic regions of Mars. Together, these regions illustrate how geologic processes involving volcanism, tectonism, water, ice, and impacts have shaped the planet on a global scale.

Mars is one of the smaller planets in the solar system, but its geology is on a grand scale. With a surface sculpted by almost every major geological process known, it has vast chasms, broad lava plains, ancient impact basins, and the largest volcano in the entire solar system – Olympus Mons. But all this has evolved over distinct epochs, with different geological processes dominating at different times. To date these geological periods precisely will probably require a series of crewed trips to the Red Planet.

Scientists using the spacecraft’s magnetometer have found banded patterns of magnetic fields on the Martian surface. The adjacent magnetic bands point in opposite directions, giving these invisible stripes a striking similarity to patterns seen in the crust of Earth’s sea floors.

On the Earth, the sea floor spreads apart slowly at mid-oceanic ridges as new crust flows up from Earth’s hot interior. Meanwhile, the direction of Earth’s magnetic field reverses occasionally, resulting in alternating stripes in the new crust that carry a fossil record of the past hundreds of million years of Earth’s magnetic history, a finding that validated the once-controversial theory of plate tectonics. 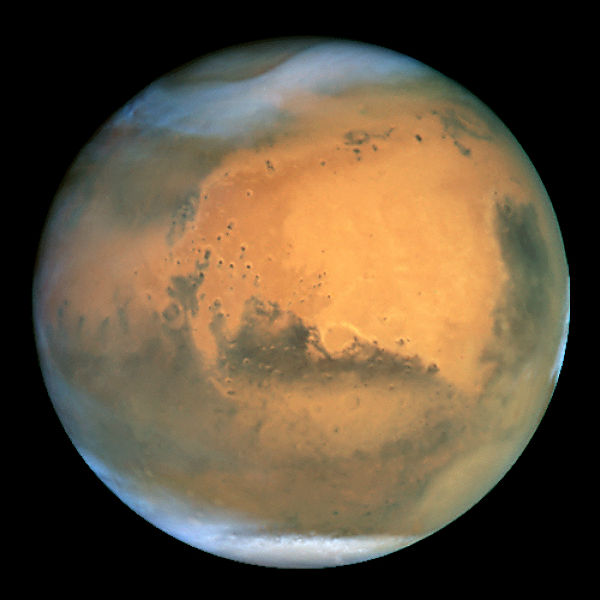