The article titled “Open-source archive of active faults for northwest South America,” by Gabriel Veloza and colleagues  introduces the “Active Tectonics of the Andes Database”. It should provide more data to more geoscientists. Their work includes the locations and associated geological information for more than 400 mapped faults in this region. The digital signature allow modern mapping tools, including Google Earth, to depict these faults and to include other forms of data, such as GPS velocities, earthquake locations and plate motion data.

Free and open access to the many types of spatial and geological data collected by geologists will improve knowledge and understanding of active seismic faults and associated hazards. Some of the most important questions and issues that can be addressed with these digital compilations of geological data include comparison of the direction and velocity of surface displacement measured by Global Positioning System receivers (GPS) with the location, orientation, and type of fault zone observed in the geological data. 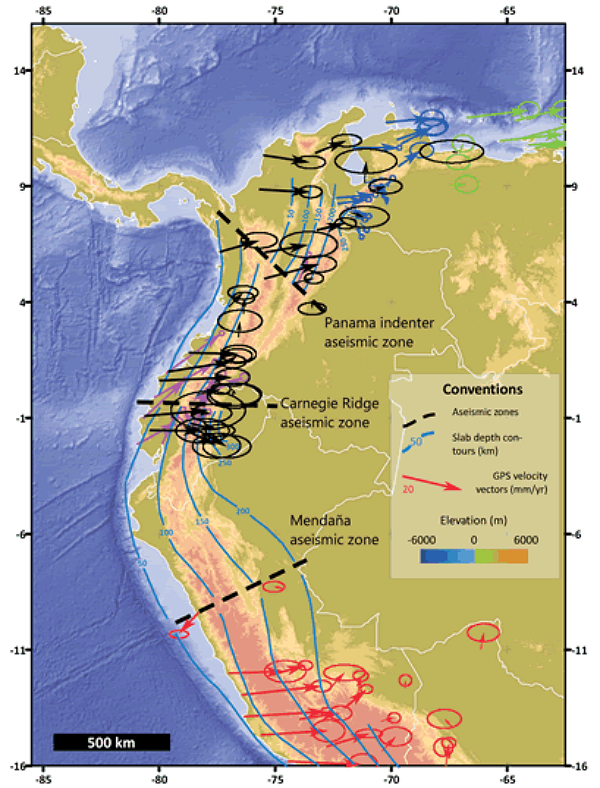 Many fault zones have geological records of large earthquakes that have longer-term histories of displacement, which cannot be adequately studied using short-term data from GPS. However, the GPS data still provide excellent coverage of the nowadays surface motion associated with plate boundary zones.

Evidence from the geological record must be used in order to really understand the seismic hazards associated with faults that have long-term slip histories.

In the October 2012 issue of GSA Today, graduate students Gabriel Veloza and Richard Styron, and their faculty advisor, Michael Taylor, from the Dept. of Geology at the University of Kansas, and Andres Mora from the Instituto Colombiano del Petroleo in Colombia, present a detailed digital compilation of active faults and other geological feature from the NW portion of South America.

Active deformation of northwest South America is characterized by interaction between the Caribbean and Nazca plates with the South American margin, in sharp contrast to the classic Andean convergent margin south of 5°S. This change in plate configuration is reflected in the distribution and kinematics of active structures in the upper plate, where strain is distributed over hundreds of active structures capable of generating damaging earthquakes.