Paraguay has declared a national state of emergency as more than 5 000 wildfires rage amid drought and record hot temperatures across South America.

Paraguay’s Congress declared a national emergency on Thursday, October 1 as more wildfires broke out, scorching wide swaths of the Chaco dry forest. The declaration is to boost financial aid for fire-fighting and open the door for seeking international help.

Two firefighting aircraft had arrived in the country, set to douse the worst-hit regions.

A total of 5 231 individual forest fires have been raging across the country, with most of them concentrated in the Chaco region. The thick smoke had reached as far as the capital Asuncion.

Joaquin Roa, the chief of the National Emergency Secretariat, said the Chaco region was a "breeding ground" for wildfires, with air temperatures rising.

"All the fires that have been generated are controlled but we have not won the battle, we cannot lower our guard," Roa added.

My country, Paraguay, is on fire. You see the second pic, that's what i see when i look out of the window.
There are fires in ALL the country.

Please at least RT if you see this because we are desperate and the world knows NOTHING.#ParaguayEnLlamas #ParaguaySeQuema pic.twitter.com/fYKlTuyzF5

I'm sorry if I don't post a lot this days. My country is burning, Paraguay is in a crisis rn. There's no electricity and no water in many homes, the air is toxic, firefighters are running out of recourses, everything is wrong. pic.twitter.com/ZnOtlP4oMx

Paraguay needs help, our president and government are not doing something for stop this extreme situation, our forests and everything is burning, we need international help right now, we are trying to stop the fire but we don't have the equipment, pls share this #PrayForParaguay pic.twitter.com/810xWzwaVp

Guillermo Achucarro, a climate policy researcher at Asuncion's Base-IS research center, linked the fires to the country's environmental record, with cattle ranching impacting some of the world's highest rates of deforestation.

Vice-President Hugo Velasquez, on the other hand, claimed that the fires were started by residents burning their waste. Cristina Goralewski, head of the National Forestry Institute, blamed land invasions and illegal marijuana cultivation. 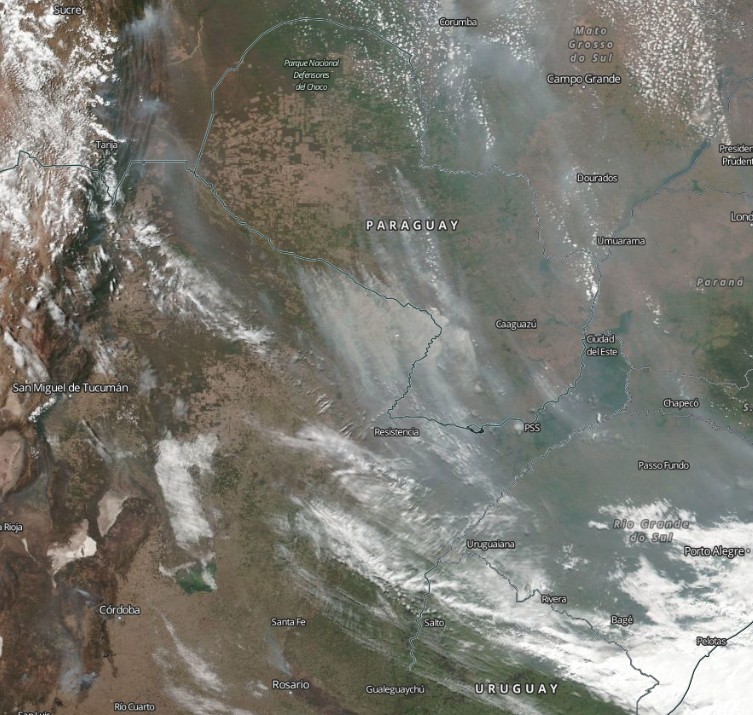 In Brazil, the Amazon is recording its worst fires in a decade. Argentina had also seen a record number of fires along the Parana River, with multiple locations in the country gripped by devastating blazes.

Paraguay’s Directorate of Meteorology expects no rainfall until October 7.

THIS IS MY PARAGUAY!! THE WHOLE COUNTRY IS ON FIRE AND NO ONE CARES! PLEASE SHARE THIS. #ParaguaySeQuema #ParaguayEnLlamas pic.twitter.com/YYBNfbkKwg

NO ONE IS TALKING ABOUT THIS: MY COUNTRY IS BURNING AND I NEED YOUR HELP #PrayForParaguay ‼️PLEASE RT AND SHARE THE INFORMATION TO HELP, I NEED MAINSTREAM INTERNATIONAL MEDIA TO SEE THIS pic.twitter.com/vPJHIAOogt

This is unfortunate, here in Paraguay we are in a dry season and these idiots think of burning and then it becomes an uncontrollable forest fire, the native animals die and the pollution is high pic.twitter.com/NGxllTp7EB