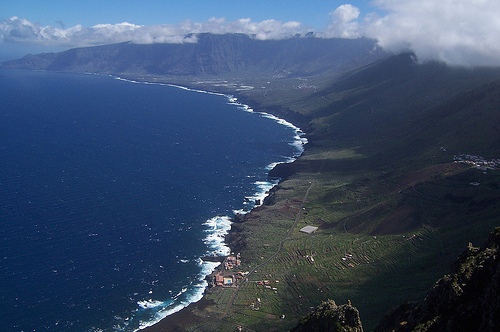 Over 150 earthquakes were recorded on the smallest of the Canary Islands during Tuesday prompting officials to evacuate some local residents, shut El Hierro’s main tunnel, and close local schools. At least 20 earthquakes, exceeding magnitude 3.0 on the Richter Scale, have been felt by local residents during the last 24 hours. The most recent earthquake, which measured 3.4 magnitude, was recorded just off the southern tip of the island at 07:04 am Wednesday.

The rise in seismic activity last night prompted the Spanish Civil Guard (Guardia Civil) to advise almost 50 residents of the municipality of La Frontera to leave their homes because of landslide fears.

Plans are also underway to evacuate more of the island’s 10,000 residents, according to Canarias7.es. The newspaper reported that two units of the Spanish military’s emergency intervention unit (EMU) will depart nearby island Tenerife this afternoon to assist in the possible evacuation of hundreds of El Hierro residents.

Meanwhile, the island’s main tunnel (Tunel del Golfo), which links Frontera to Valverde, has been shut forcing motorists to travel across the 280-sq-km island via a mountain road. The Cabildo de El Hierro also has ordered the closure of schools on Wednesday.

Hierro, a shield volcano, has had a single historic eruption from the Volcan de Lomo Negro vent in 1793. The eruption lasted approximately one month and produced lava flows.

The Canary Islands Government commenced an in-depth geological survey of El Hierro earlier this month in an effort to determine the source of an earthquake swarm. The Government raised the volcanic risk level to ‘Yellow’ on Sunday, the highest alert status since an unprecedented earthquake swarm commenced in mid-July. 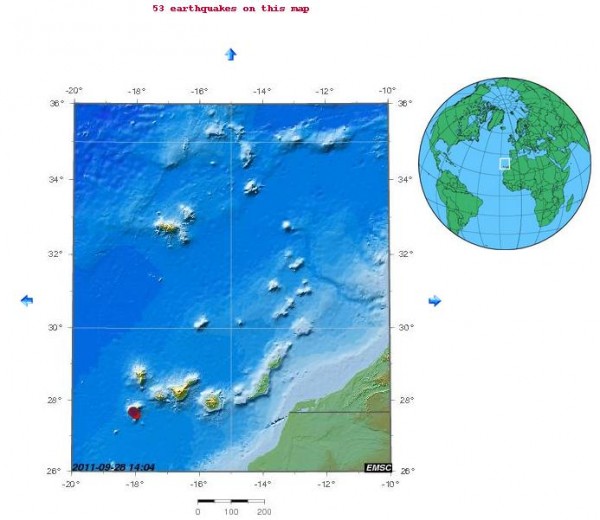 The unprecedented seismic activity commenced on 19 July (the activity was first reported by iWeather Online on 26 July). In excess of 8,200 earthquakes have been recorded up to Wednesday, 28 September 2011.

Up to last weekend, the majority of earth tremors ranged between 1 and 3 magnitude. However, the majority of quakes are now registering between 2 and 4 magnitude and are occuring at depth of 14-17 kilometres, according to the National Geographic Institute (IGN).

Speaking to the El Pais newspaper, volcanologist Juan Carlos Carracedo suggested that an eruption on El Hierro would “not be a major surprise”. He explained: “It is the youngest of the Canary Islands. There is a ball of magma which is rising to the surface and it is stationed at the limit of the earth’s crust. At the moment we do not know if that ball of magna will break the crust and cause an eruption.”

IGN Director, María José Blanco said that any eruption on El Hierro would most likely have a “low explosion value”. He added that an imminent eruption is unlikely.

In the meantime, the frequent and increasingly intense earthquakes being felt throughout El Hierro are unlikely to appease the residents of and visitors to the tiny island.

Earthquake swarms are events where a local area experiences sequences of many earthquakes striking in a relatively short period of time. The length of time used to define the swarm itself varies, but the United States Geological Survey (USGS) points out that an event may last for days, weeks, or months. 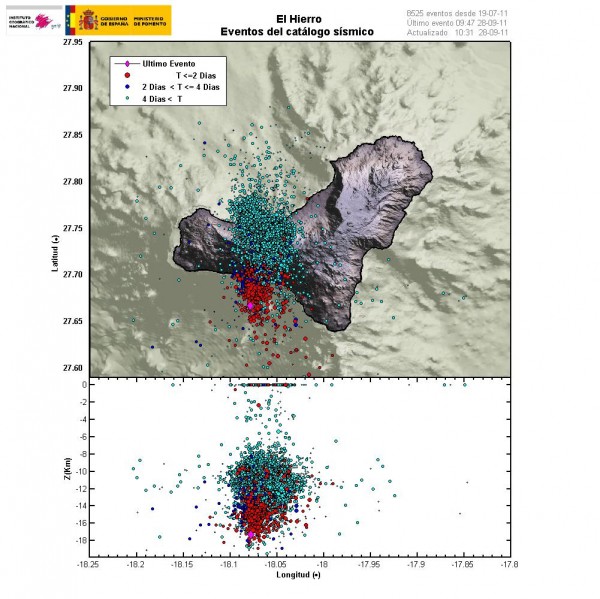 El Hierro is situated in the most southwestern extreme of the Canaries.  The  island was formed after three successive eruptions, and consequent accumulations, the island emerged from the ocean as an imposing triangular pyramid crowned by a volcano more than 2,000 metres high.

The volcanic activity, principally at the convergence of the three ridges, resulted in the continual expansion of the island. A mere 50,000 years ago, as a result of seismic tremors which produced massive landslides, a giant piece of the island cracked off, crashed down into the ocean and scattered along the seabed. This landslide of more than 300km3 gave rise to the impressive amphitheatre of the El Golfo valley and at the same time caused a tsunami that most likely rose over 100 metres high and probably reached as far as the American coast.

According to the Global Volcanism Program, the massive Hierro shield volcano is truncated by a large NW-facing escarpment, seen here from the east, which formed as a result of gravitational collapse of the volcano. The steep-sided 1500-m-high scarp towers above a low lava platform bordering 12-km-wide El Golfo Bay, which is barely visible at the extreme left. Holocene cones and flows are found both on the outer flanks and in the El Golfo depression. The last eruption, during the 18th century, produced a lava flow from a cinder cone on the NW side of El Golfo.

According to ElHierro.com: “Although over 200 years have elapsed since the last eruption, El Hierro has the largest number of volcanoes in the Canaries with over 500 open sky cones, another 300 covered by the most recent outflows, and some 70 caves and volcanic galleries, notably the Don Justo cave whose collection of channels surpasses 6km in length.”

El Hierro is located south of Isla de la Palma (population 86,000), currently the most volcanically active of the Canary Islands.  About a half a million years ago, the volcano, Taburiente, collapsed with a giant landslide, forming the Caldera de Taburiente. Since the Spanish occupation, there have been seven eruptions. (IWO)