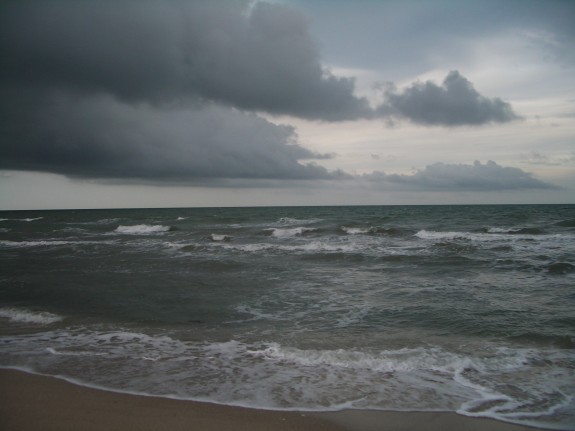 Irene is projected to become the strongest hurricane to hit the Carolinas since 1996 this weekend. Six years have passed since the entire United States endured a blow like Irene is forecast to unleash. The AccuWeather.com Hurricane Center is expecting Irene to blast onto the Carolina coastline in between Myrtle Beach and Morehead City this weekend as a strong Category 3 hurricane.

Irene will actually strengthen into a dangerous Category 4 hurricane on Thursday and it is not out of the question that Irene maintains this powerful strength through its landfall in the Carolinas. Whether at strong Category 3 or 4 status, Irene will pose a serious threat to lives and property at landfall. 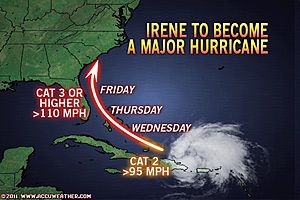 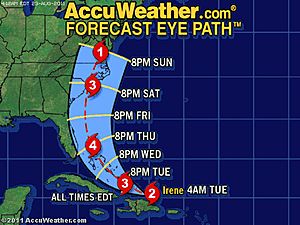 Residents of the Carolinas should not underestimate the power Irene has the potential to unleash, especially since these states have not been the target of such a fierce hurricane in 15 years. Fran from 1996 was the last hurricane to strike the Carolinas with Category 3 strength (the threshold for a major hurricane). Fran barreled onshore with maximum-sustained winds of 115 mph in the vicinity of Cape Fear, N.C., a location that could lie in the direct path of Hurricane Irene this weekend. Fran was responsible for the deaths of 34 people from the Carolinas to Pennsylvania. Most of the deaths were caused by flash flooding with 21 people killed in North Carolina alone. (AccuWeather)

Given the setup in the atmosphere as well as where hurricanes have traveled from similar starting points, negotiating the Antilles, Irene may take a path somewhat similar to Hurricane Bertha in 1996.

The difference between Bertha and Irene is that Bertha was a Category 2 hurricane at landfall. Irene should come onshore as a strong Category 3 hurricane. Irene would then become the strongest hurricane to strike the United States since Wilma in 2005.

People in the eastern part of the Carolinas, especially the coastal areas and barrier islands from the Myrtle Beach area on northeast, should begin making preparations for a possible hurricane landfall that brings 100-mph winds or greater, storm surge flooding, torrential rainfall and possible tornadoes. People in these areas should be prepared to evacuate, in case the order is given. As we often see with a hurricane moving along this sort of path, the worst conditions will be near, north and east of the center of circulation.

If the fast-forward motion of the storm continues, it could spread damage, including that of downed trees, power lines and coastal flooding issues into the mid-Atlantic late this weekend and into southern and eastern New England by early next week. There is a possibility the center of Irene may try to parallel the Carolina coast at the last minute.

How to Get Out: North Carolina Evacuation Routes for Irene

How to Get Out: South Carolina Evacuation Routes for Irene