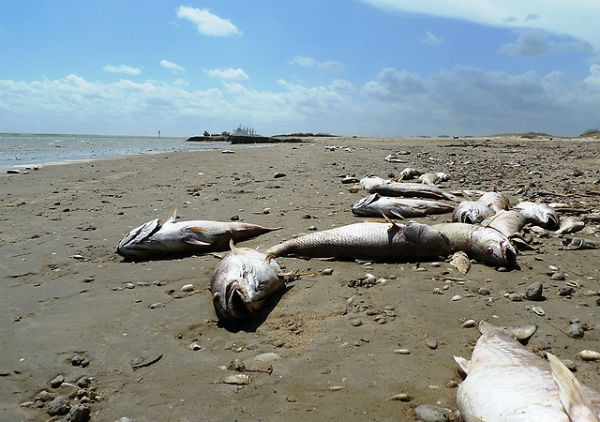 On August 17, 2012, all along the Myrtle Beach coast, beach-goers were finding mixed species of dead fish floating in the surf or washing up on shore – sting rays, pompanos, whitings, flounders… The fish did not have any obvious signs of trauma. 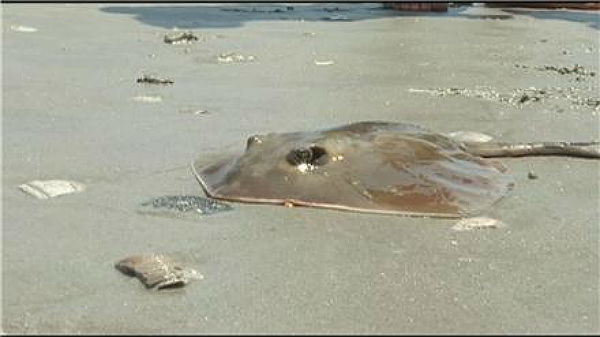 Phil Maier, director of Coastal Reserves and Outreach for DNR office in Charleston, said there were groups of dead fish found between 28th and 68th Avenues North Friday. He said that water conditions are right for Friday’s fish kill to be caused by hypoxia, or low dissolved oxygen in the ocean. There have been light southwest winds, warm water and spring tides. Maier said it is very likely it was the dissolved oxygen levels that killed the fish, but DNR, the Department of Health and Environmental Controls and scientist at Coastal Carolina University continue to take samples and investigate the cause. Another possible reason is the red tide.

The occurrence of red tides in some locations appear to be entirely natural (algal blooms are a seasonal occurrence resulting from coastal upwelling, a natural result of the movement of certain ocean currents) while in others they appear to be a result of increased nutrient loading from human activities. Other factors such as iron-rich dust influx from large desert areas such as the Saharan desert are thought to play a major role in causing red tides.

Wildlife officials estimate more than a million fish have been killed in Southeast Texas by the algae bloom known as red tide. The Texas Parks and Wildlife Department offered the estimate after a flyover on August 16 in the Galveston area.Tens of thousands of dead fish began washing up on beaches last weekend. Water samples collected Monday confirmed the red tide at various sites in Galveston Bay. Parts of Galveston Bay have been closed to shellfish harvesting because of the algae bloom, which can cause respiratory problems. 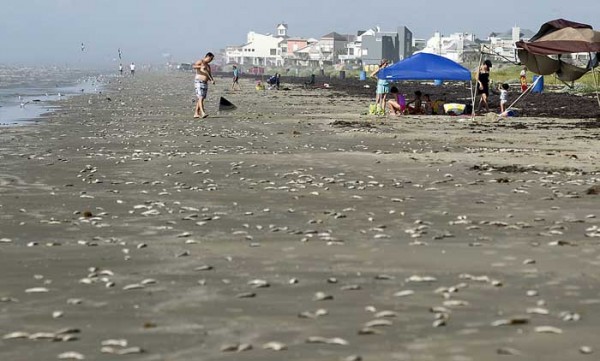 The human health effects associated with eating brevetoxin-tainted shellfish are well documented. However, scientists know little about how other types of environmental exposures to brevetoxin—such as breathing the air near red tides or swimming in red tides—may affect humans.

In large concentrations, the algal bloom becomes visible as a brown or red discoloration floating on the surface waters. No visible blooms have been reported though biologists did observe one area of discolored water in Keller Bay near the Alcoa plant and around Aransas Bay.

Red tides in the Gulf of Mexico are mainly a result of high concentrations of Karenia brevis, a microscopic marine algae that occurs naturally but normally in lower concentrations. In high concentrations, its toxin paralyzes the central nervous system of fish so they cannot breathe. Dense concentrations appear as discolored water, often reddish in color. It is a natural phenomenon, but the exact cause or combination of factors that result in a red tide outbreak are unknown.