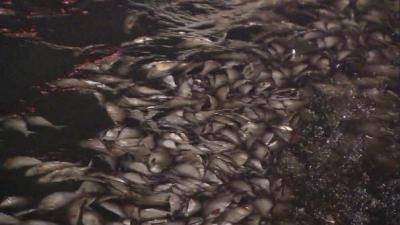 A pond in Glen Ellyn has become overrun with hundreds of dead fish. Neighbors first noticed the floating fish carcasses a few days ago in a pond called Maryknoll in a small subdivision just east of 355.

They say the smell is awful. The pond is a popular fishing spot full of bass, catfish and bluegill, but residents aren’t sure what type of fish the dead ones are, nor is it clear why they have suddenly died. The pond is connected to a stream linked to several small ponds throughout Glen Ellyn and Lisle.

This is the second time in as many months bizarre fish deaths were reported in the Chicago area. Thousands of dead gizzard shad, a fish from the herring family, were found floating in Diversey and DuSable harbors in Chicago in January. The Maryknoll Estates homeowner’s association is asking environmental officials to investigate the mass fish deaths. (NBCChicago)

According to police it’s snow covering an iced-over pond that cut off oxegyn to scores of fish and causing a large die-off in a Glen Ellyn pond. Deputy Police Chief Bill Holmer said they consulted with staff from the DuPage County Forest Preserve and learned the condition is known as “fish kill.” This is fairly common and typically caused when a pond freezes and snow covers the surface. The snow prevents sunlight from penetrating the water, which does not allow plant life to produce oxygen, essentially causing the fish to suffocate and die.

“Factors this winter seem to have been especially right for this condition because of the large amounts of snowfall,” Holmer said in the release.

As of Thursday morning, none of the dead fish could be seen in the water and might have floated down stream. However, it was not immediately clear whether they were removed or floated away. Illinois Environmental Protection Agency Spokeswoman Maggie Carson said an inspector visited the site and found no evidence that pollution or contamination caused the fish to die. “The fish had an inadequate supply of oxygen, due to the shallowness of the pond and the ice cover. This is not uncommon during certain times of the year, including cold winters and hot dry summers.” (TribLocal)

Police said officers were not called to the scene to respond to the situation, but an officer stopped by the pond about 8 p.m. Wednesday evening as a TV news crew filmed the bizarre sight. The officer estimated about 50 to 80 dead fish were floating in the pond at the time, police said. (SunTimes)