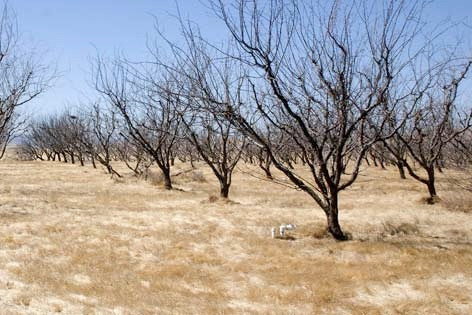 Over-pumping is pulling vast and unsustainable amounts of groundwater from the heart of California farming, the Central Valley, a new UC Irvine satellite study shows – with enough lost over four years to fill two-thirds of Lake Mead.

The phenomenon shows no sign of slackening despite two wet winters in a row, and the rate of extraction is likely greater than the estimated depletion rate, said Earth System Science professor Jay Famiglietti, the study’s lead author. Using NASA’s GRACE satellites to measure gravitational changes as groundwater levels drop, Famiglietti saw the surprisingly steep decline between April 2006 and March 2010.

Going back to 1998, the scientists saw a total amount of groundwater loss of 12.8 trillion gallons, or 40 million acre feet – enough to cover almost half of California under a foot of water. The depletion was especially heavy in the southern, San Joaquin portion of the Central Valley. The 2006 to 2010 drop was the third largest in 50 years, all of them tied to drought conditions.

As drought intensifies, farmers increase their reliance on groundwater. Restrictions on pumping from the California Delta to protect a threatened fish called the delta smelt also drove farmers to pump more groundwater. Unrestricted pumping from private wells complicates the problem as well as a booming population requiring more and more water to sustain it. But accurate estimates of groundwater pumping are notoriously difficult. 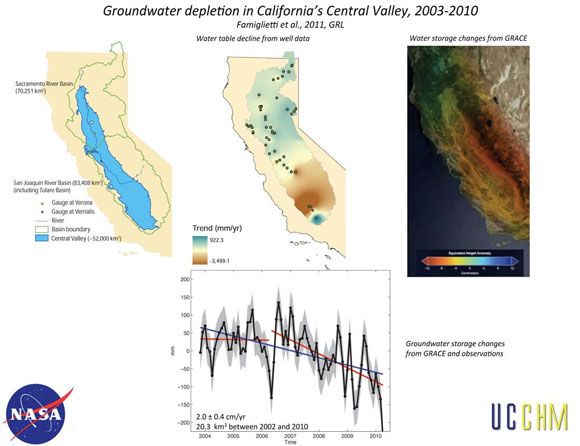 The processing of satellite data typically involves about a six-month lag so data from this winter are not yet available. Powerful winter storms increased the snowpack this year, with state water officials reporting full reservoirs. But that doesn’t mean the depletion will be substantially reversed, or that drought conditions that lead to depletion will disappear.

“Last winter was pretty wet, too, and we did not see any significant recovery of groundwater,” he said.
The trend toward decreasing rainfall and more frequent drought will likely continue because of climate change, Famiglietti said – perhaps as much as a 90 percent decrease in snowpack by the end of the century.
“If we have a wet winter, that does not change the fact that we are facing a very long-term decline in precipitation,” he said. “A couple of wet winters doesn’t end a drought. Don’t get me wrong: It’s a great boost to water resources. But in the long term, it’s a problem we have to deal with.”

Changes on the surface also mean slight changes in gravity; by precisely comparing distances between them, the two satellites can make gravitational maps that reveal the changes. (TheOrangeCountyRegister)

The study was published online Saturday in the science journal Geophysical Research Letters.