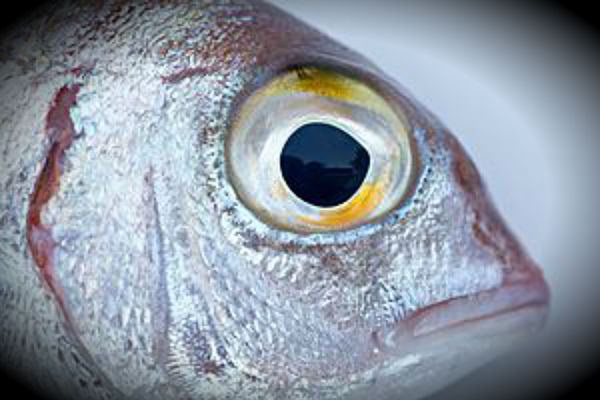 More than half of the continental U.S. is experiencing extreme drought conditions. Hot temperatures and lack of rain are causing heating and drying up of rivers and streams and killing thousands of fish in the process. According to Division of Fisheries, the rivers’ low flows combined with severe drought are heating some rivers up to almost 40°C (105°F). According to Illinois Department of Natural Resources biologist Dan Stephenson, hundreds of thousands of fish are already dead and he blame the hot, dry weather.

About 40,000 sturgeon were killed in Iowa last week. Nebraska fishery officials said they’ve seen thousands of dead sturgeon, catfish, carp, and other species in the Lower Platte River, including the endangered pallid sturgeon. And biologists in Illinois said the hot weather has killed tens of thousands of largemouth and smallmouth bass and channel catfish and is threatening the population of the greater redhorse fish, a state-endangered species. And if water levels stay low untill winter, when the rivers start to freeze, we could see some significant fish kills during winter. 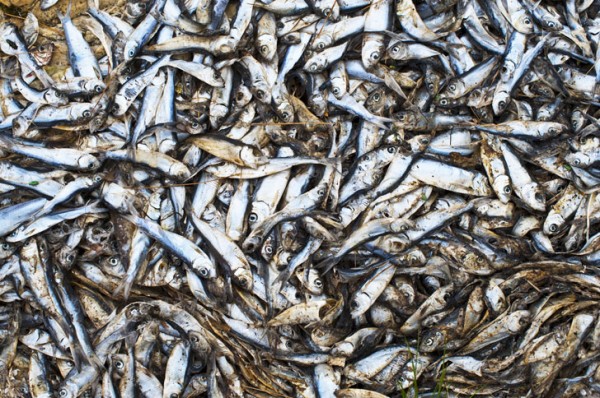 So many fish died in one Illinois lake that the carcasses clogged an intake screen near a power plant, lowering water levels to the point that the station had to shut down one of its generators. Heat and lack of rain has dried up a large swath of Aux Sable Creek, the state’s largest habitat for the endangered greater redhorse, a large bottom-feeding fish, said Dan Stephenson, a biologist with the Illinois Department of Natural Resources.

In Nebraska, a stretch of the Platte River from Kearney in the central part of the state to Columbus in the east has gone dry and killed a “significant number” of sturgeon, catfish and minnows. Warm, shallow water has also killed an unknown number of endangered pallid sturgeon.

Geno Adams, a fisheries program administrator in South Dakota, said there have been reports of isolated fish kills in its manmade lakes on the Missouri River and others in the eastern part of the state. But it’s unclear how much of a role the heat played in the deaths.

Every summer when temperatures rise, fish die from the low oxygen levels in the water. After waters hit 32°C (90°F), they can hold very little oxygen necessary for the fish to stay alive. The combination of record-breaking temperatures and record-low waters has made the amount of fish kills more widespread this year. A lack of water in the ground has allowed the sun to heat the surface much more efficiently than it normally would, due to less water being evaporated.

A discharge of iron-laden cooling water and resulting fish kill is being investigated by the Iowa Department of Natural Resources (DNR) on Cheslea Creek on the south side of Mason City. The DNR responded to a report Thursday morning that water in Cheslea Creek was orange. The orange discharge was traced back to a tile outfall where the Golden Grain Energy facility is allowed to release cooling water from the process.

A final fish count by DNR fisheries biologists was not available yet on Friday afternoon. There were also portions of the stream where accurate fish counts could not be obtained because the water was so discolored. About a mile of Cheslea Creek was affected and it did not reach Big Black Lake in Lester Milligan Park.

It was discovered that excess sulfuric acid had been added to the cooling water system that mobilized rust within the plant piping system, which then resulted in an orange discharge into Cheslea Creek. The affected cooling tower was taken off-line and approximately 600,000 gallons of the iron-laden water diverted to a storm water pond that Golden Grain has on site.

July 2012 marked the hottest month on record ever for the lower 48 states, according to a report released by NOAA. The hottest locations in July were mostly stretched across the Midwest and central Plains, areas largely plagued by intense drought. July’s record warmth contributed to the record-warm first seven months of the year and the warmest 12-month period the U.S. has experienced since record keeping began in 1895. The Department of Agriculture has declared more than half of the nation’s counties — nearly 1,600 in 32 states — as natural disaster areas. More than 3,000 heat records were broken over the last month. 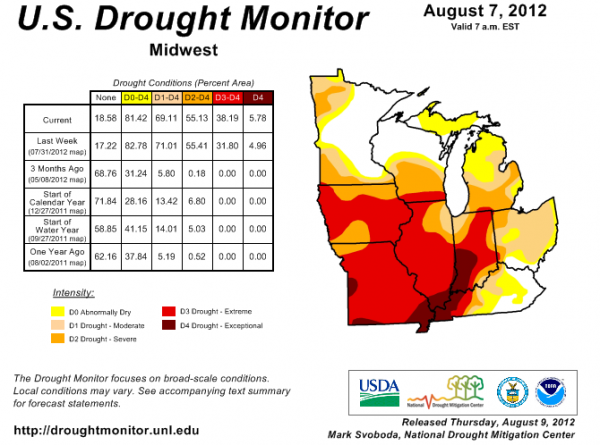 Currently, 98 of Illinois’s 102 counties have been declared disaster areas from the drought, according to the state’s Drought Response Task Force. The remaining four are still seeking disaster declaration. Lakes in Iowa are reaching record-low water levels. Iowa DNR officers report that Storm Lake in northwestern Iowa is at its lowest point ever, a mere 18 inches in parts that are normally 43 inches deep.

A quick look at the U.S. Drought Monitor shows the worst of the drought is affecting the center of the country.