Geologists say a fault in central Arkansas where hundreds of earthquakes have been recorded in recent months is longer and potentially more destructive than initially believed. Scientists had thought the fault is 3.7 miles long. Now they estimate it to be 6 to 7.5 miles long. 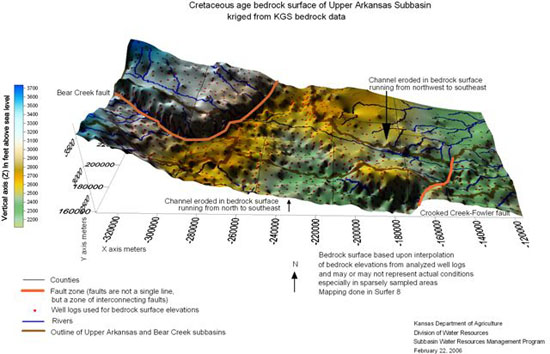 Arkansas Geological Survey geohazard supervisor Scott Ausbrooks told  that the length is a concern because a longer fault could trigger bigger earthquakes. They have named the fault line "The Guy-Greenbrier Fault" in an effort to track the swarms of quakes in the area. Ausbrooks says the longer fault line could create up to a magnitude 6.0 earthquake in Arkansas.

More than 800 earthquakes have been recorded in the area in the past six months — including a 4.7 magnitude quake on Feb. 27 that was the largest earthquake recorded in Arkansas in 35 years. Injection wells used by companies drilling for natural gas and thought to be connected to the quakes have been temporarily shut down.

Heavy downpours affecting Syria's Raqqa governorate since March 25, 2020, caused damaging floods and mudslides, killing at least seven people. The Civil Council of Raqqa, which is affiliated with the Kurdish Autonomous Administration of North and East Syria...

Major flooding continued in parts of Iran this week, with at least 19 provinces badly affected since late February. Inundations have caused damages worth hundreds of millions of dollars. More buildings sustained damages, both in rural and urban areas, and four...

Hundreds of properties damaged or destroyed as floods and landslides hit Huanuco, Peru

Heavy rains since March 28, 2020, have been hitting the department of Huanuco in central Peru, leading to flooding and landslides. The severe weather disrupted lives in the area, partially or totally damaging hundreds of properties. According to the country's...

April 1 - Moon at First Quarter - 10:21 UTC. The Moon will be prominent in the evening sky. At this time in its monthly cycle of phases, it appears almost exactly half illuminated. April 2 - M104 well placed for observation. The sombrero galaxy (M104, NGC 4594) will...

Strong and shallow M6.5 earthquake hits Idaho – the largest since 1983

A huge forest fire broke out in southwestern China's Sichuan province at 07:51 UTC (15:51 LT) on Monday, March 30, 2020. As of Tuesday, March 31, authorities confirmed 19 fatalities, including 18 firefighters and one farmer guide. The blaze has spread across 1...

An intense hailstorm hit the town of Middelburg in Mpumalanga, South Africa, on March 27, 2020, causing extensive damage. The incident was dubbed a "disaster within a disaster" as it came on the same day the country started its three-week coronavirus...

San Rafael Waterfall -- the tallest waterfall in Ecuador and one of the county's most stunning landscapes, disappeared last month after a large sinkhole opened on the Coca River, just a few minutes before the falls. With waters dropping about 150 m (490 feet),...