Two pyroclastic flows were also detected. Ashfall was reported in multiple areas downwind. Based on analyses of satellite imagery, the Washington VAAC reported that ash was detected on March. 6 The next day an ash plume drifted almost 20 km SouthWest. 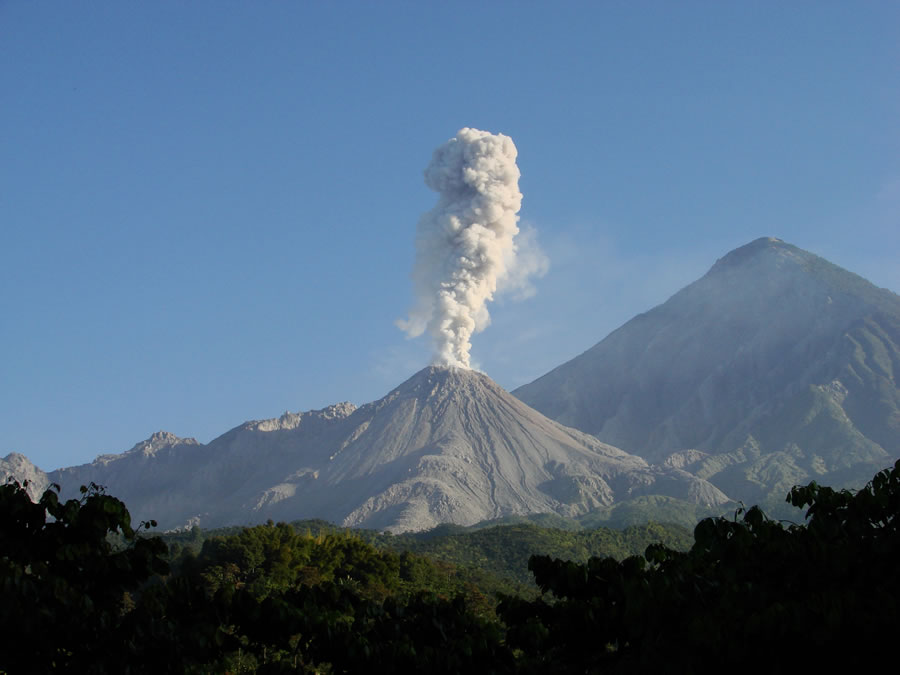 Symmetrical, forest-covered Santa María volcano is one of a chain of large stratovolcanoes that rises dramatically above the Pacific coastal plain of Guatemala. The stratovolcano has a sharp-topped, conical profile that is cut on the SW flank by a large, 1-km-wide crater, which formed during a catastrophic eruption in 1902 and extends from just below the summit to the lower flank. The renowned Plinian eruption of 1902 followed a long repose period and devastated much of SW Guatemala. The large dacitic Santiaguito lava-dome complex has been growing at the base of the 1902 crater since 1922.

Freezing temperatures and snowfall have been reported in Saudi Arabia's Asir Province on January 10, 2021, leaving urban areas, mountains, and deserts covered in snow. The temperatures in the region dropped below -2 °C (28.4 °F) for the first time in 50...

Ice has again covered deserts around the Algerian town of Ain Sefra -- The Gateway to the Sahara -- on January 13, 2021. This is the fourth winter in a row we receive snow or ice reports from this area. Related articles: Snow covers northern Algeria's desert...

Large and powerful low pressure system in the Central U.S.

A large and powerful low pressure system will develop and intensify across the Central U.S. on Thursday, January 14, 2021. The two main hazards will be heavy snow and high winds. Winter storm and blizzard warnings are in effect for portions of the Upper Midwest and...

Kashmir's Dal Lake froze on Thursday, January 14, 2021, while capital Srinagar recorded its coldest night in 30 years as a severe cold wave gripped the valley. The summer capital registered a low of -8.4 °C (16.9°F), the coldest since 1991 when...

A powerful windstorm hit the Pacific Northwest on Wednesday, January 13, 2021, leaving at least two people dead and more than half a million people without electricity. The storm left a trail of damage, caused a landslide that shut down a highway, and produced a...

Severe weather in West Java, Indonesia, has triggered severe flooding that damaged more than 10 000 homes, according to the disaster management agency BNPB. Rescue efforts continue as of January 13, 2021, to retrieve missing people after landslides hit Sumedang...

Hong Kong has registered its coldest temperature since 1988 as the mercury in Ta Kwu Ling hit 0.9 °C (33.6 °F) on Wednesday morning, January 13, 2021. According to The Standard, temperatures plummeted below the freezing point in some parts of New Territories...

An exceptional atmospheric river rated Category 5 (AR 5) is soaking the Pacific Northwest, bringing flooding rain and strong winds in parts of coastal Oregon and Washington, where up to 8 600 customers were left without power on Tuesday, January 12, 2021. Threats of...

A bright fireball exploded over Norway at 23:21 UTC on January 4, 2021 (00:21 LT, January 5), producing a loud bang that was heard by many people, particularly those in Ullensaker. Norwegian Seismic Array (NORSAR) said ground impact was recorded at 23:24 UTC, 15 to...

A bright meteor was reported over the Kamchatka Peninsula, Russia, on Tuesday morning, January 12, 2021. The object burnt up before reaching the ground and was less than 10 m (33 feet) in diameter, preliminary assessments suggested. "We were shown a video which...