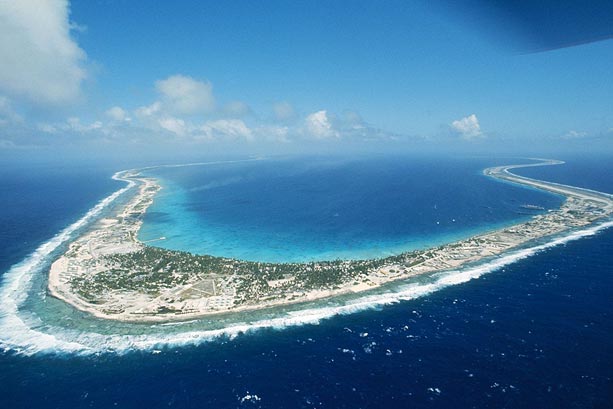 The Nuclear Association’s president, Roland Oldham, told Radio Australia’s Pacific Beat program that radioactive material could be released into the Pacific Ocean if the atoll were to collapse. (Listen to the report here.) French nuclear safety official, Marcel Jurien de la Graviere, suggested that people on nearby Tureia Atoll could be exposed to radiation 300 times the level in France. If the atoll collapses there could be international ramifications. 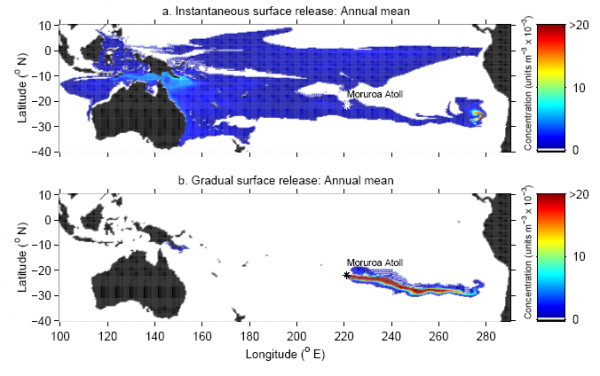 Officially, France has conducted 181 nuclear test explosions in Mururoa. There are about 150 holes containing very dangerous levels of radioactivity. The Nuclear Association stated if the atoll were to collapse it could also trigger a 15 meter-high tsunami. The association wants independent experts to be allowed to conduct a study to provide more information about the danger of the atoll collapsing.

“We have to warn everybody because the problem will not only concern some of the atolls that are only 100 km from Mururoa. But I think it will be a really big problem to the environment if this nuclear radioactivity is to be diluted in the ocean and from there we have no control over what would happen.” Roland Oldham 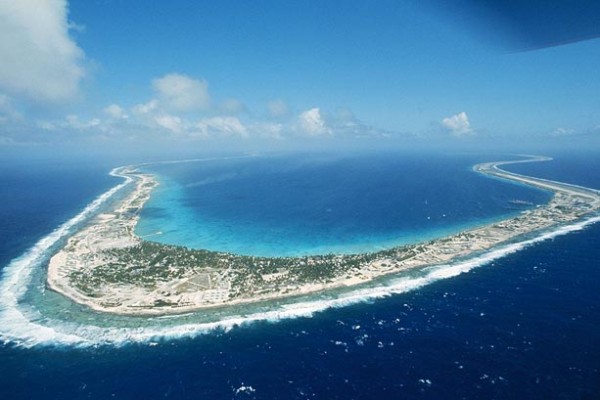 After intense world pressure for nuclear free Pacific, shafts were drilled deep into the volcanic rocks underlying the atolls where nuclear devices were detonated. This practice created much controversy as cracking of the atolls was discovered, resulting in fears that the radioactive material trapped under the atolls would eventually escape and contaminate the surrounding ocean and neighboring atolls.

A major accident occurred on July 25, 1979 when a test was conducted at half the usual depth because the nuclear device got stuck half way down the 800 metre shaft. It was detonated and caused a large submarine landslide on the southwest rim of the atoll, causing a significant chunk of the outer slope of the atoll to break loose and causing a huge tsunami. The blast caused a 2 kilometre long and 40 cm wide crack to appear on the atoll.

“If you go onto the atolls, Mururoa, which we did about six months ago, you’re going to find out that one big part of the atoll when you take the road that goes around the island, one big part of the atoll is under the water. The road you can only drive to a certain limit and the road’s in some places is two metres under the water. And you can see when you look over the sea you can see all these cracks in the coral for a few metres. And we imagine that under the water it will be worse. So that’s what we have seen. And we cannot even take one little spore, one coral from Mururoa because the authorities do not permit that. So to us we already knew that from the very beginning when some of the scientists had done some research here. Jacques Cousteau already in those days, we’re talking about gas leaking, and we’re talking about a crack in the ocean, in the atoll. We have been coming out with those elements all the time, and the French authorities has been saying to us for many years that you should not worry about it, that we are looking after the atoll and everything is alright. But we find out that they have been lying to us for that many years…” (Mr. Oldham in an interview to Radio Australia on March 15, 2011- link here)

Professional and amateur meteorologists have noted unusual weather patterns several days after each test. Most suspect these irregularities may have been caused by evaporation of surrounding sea water during the tests. Irregularities have been seen and endured across the Pacific, particularly in New Zealand, eastern Australia, and other island groups in the south-west pacific. The disturbances are not consistent with any pre-existing weather patterns.

A recent report suggests that only 11 of the 20 monitoring system sensors are actually functional which could mean the atoll could potentially collapse without forewarning of the monitoring system. 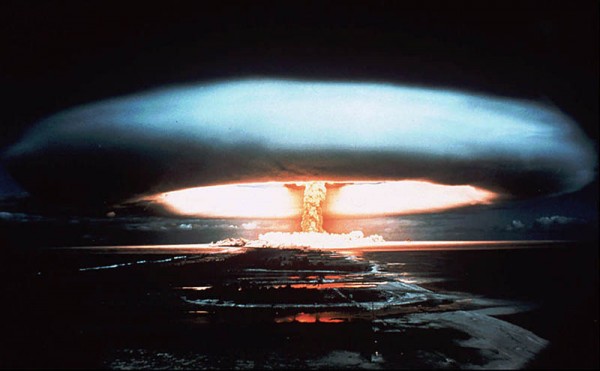 Moruroa is an atoll which forms part of the Tuamotu Archipelago in French Polynesia in the southern Pacific Ocean. It is located about 1,250 kilometres (780 miles) southeast of Tahiti.

Mururoa, and its sister atoll Fangataufa, were the site of extensive nuclear testing by France between 1966 and 1996, as well as the site of numerous protests by various vessels, including the Rainbow Warrior. The atoll was officially established as a nuclear test site by France on September 21, 1962. The atoll of Hao, 245 nautical miles (450 km) to the north-west of Mururoa, was chosen as a support base for the nuclear tests and other operations.

Despite objections from some 30 members of the Polynesian Territorial Assembly, the first nuclear test was conducted on July 2, 1966, code-named Aldebaran, when a plutonium fission bomb was exploded in the lagoon. Greenpeace stated that it sucked all the water from the lagoon, “raining dead fish and mollusks down on the atoll”, and it spread contamination across the Pacific as far as Peru and New Zealand. Most of these tests were conducted on the western end of the atoll designated as Dindon. Smaller shots were fired on the northern end of the atoll designated as Denise. Three nuclear devices were detonated on barges, three were air dropped from bombers, and the rest were suspended from helium filled balloons. A total of 41 atmospheric nuclear tests were conducted at Mururoa between 1966 and 1974. 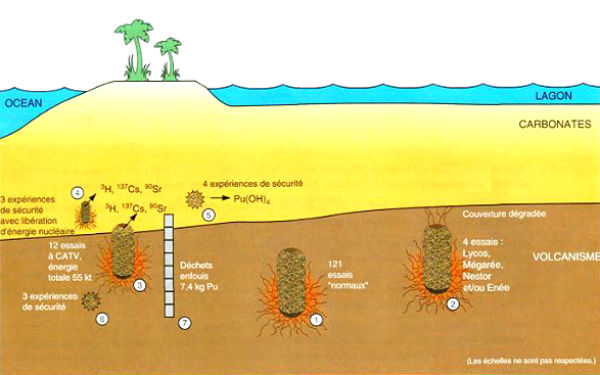 The test site at Mururoa was dismantled following France’s last nuclear test to date, detonated on January 27, 1996, but the atoll is still guarded by the French Forces.