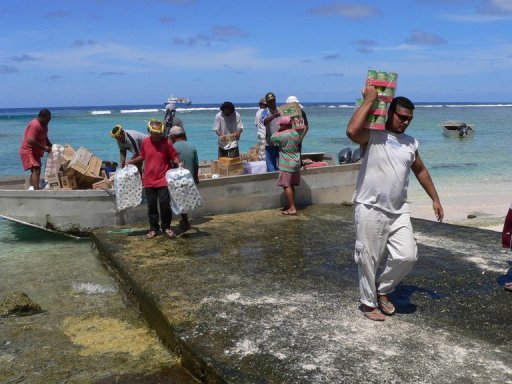 A state of emergency has been declared on the Pacific island nation of Tuvalu as stocks of drinking water dwindle following months of drought. Officials of the world’s fourth smallest nation have said that parts of the tropical atoll may have only a two-day supply of water, the UK’s Daily Mail reported on Tuesday. Tuvalu has a population of 11,000 people living in an area of only 10 square miles. 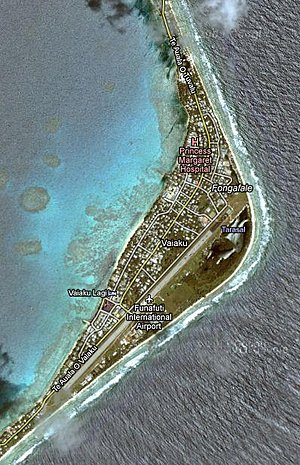 New Zealand, working with the Red Cross, was involved in the airlifting of aid workers and supplies, such as desalinators and water containers. The limited remaining water supplies may be contaminated, as some animals have died for reasons unclear.

Red Cross workers have said that rainfall has been deficient for at least six months.

Meteorologists have warned that “it is unlikely to rain until December.” Weather data accessed by AccuWeather.com show that, at Funafuti, average monthly rainfall is no less than 9 inches per month. It tops out between 15 and 16 inches in both December and January. Three dry spells over the last three years has gradually drained the community’s water supplies.

The underlying cause for the dearth of rain may be the “La Nina” cooling of the equatorial Pacific Ocean, in which Tuvalu is located.

Maps of sea-surface temperatures show that the mid-tropical Pacific has been cooler than normal for many months. Furthermore, the intensity of the cooling may be picking up as of early October. Indeed, the Pacific Ocean may be headed for another full-blown bout of La Nina.

Tuvalu relies primarily on rainfall for the majority of its drinking water, which is collected and stored in storage tanks.  The country normally receives between 200mm to 400mm of rain per month during an average years.

The secretary general of Tuvalu Red Cross, Tataua Pefe, said that lack of rain had caused the contamination of remaining ground water supplies, “It’s not safe for consumption…Some animals have died recently and we think it’s because of subterranean water. Lack of rainfall has affected other countries and territories in the region, including American Samoa, Samoa, Tokelau and Tonga. 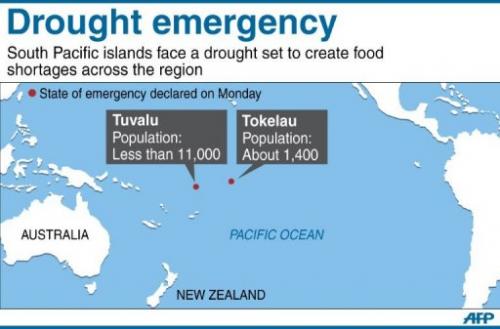 The same situation is happening in Tokelau, a New Zealand-administered territory of about 1,400 people. Tokelau has less than a week’s drinking water after a long drought blamed on a La Nina weather pattern. Tokelau declared a state of emergency late Monday, following a similar move in neighboring Tuvalu, which has a population of fewer than 11,000 and where water is already being rationed in places.

“There’s been a state of emergency declared in Tokelau as well, where there are three islands, (they are) New Zealand citizens and they’re down to less than a week’s drinking water there too,” NZ Foreign Minister Murray McCully  told Radio New Zealand.

Tuvalu, one of the world’s smallest independent nations, lies about halfway between Australia and Hawaii. Tokelau is about 500 kilometers (310 miles) to the east. McCully said other islands in the South Pacific were also reporting water shortages and New Zealand was rushing to assess the situation throughout the region amid fears the crisis could escalate.

Tuvalu has been very vocal in its calls for international help to mitigate the effects of climate change. It has warned that it is in danger of “sinking” as sea water levels rise.