Biggest Pacific storm system in nearly a decade is about to bring flooding and mudslide danger for Northern California and Oregon. An atmospheric river of moisture, also known as "Pineapple Express", is tapping moisture from the tropics ahead of round of storms that are flowing over the Pacific Ocean and into the West Coast of the United States. 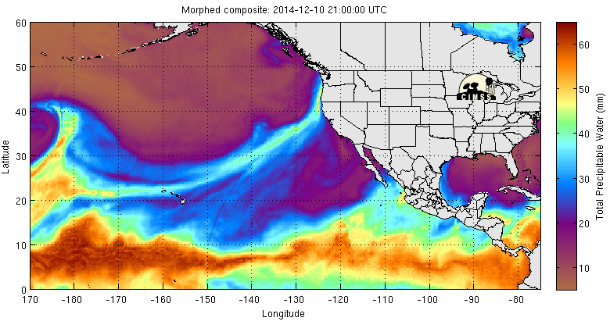 The system will also bring strong winds with gusts strong enough to down trees and cause power outages and travel disruption along the coast and over the hills and mountains from western Washington state to central California. Powerful gusts are forecast to affect San Francisco, Portland, Oregon, Seattle-Tacoma, Washington area during late December 11, 2014. Wind gusts can reach speed between 80 – 120 km/h (50 – 75 mph) around the coast of northern California and Oregon, which is bordering hurricane force wind speed. High winds on the Sierra ridges is expected to reach speed to well over 160 km/h (100 mph) with local gusts to 210 km/h (130 mph).

On December 12, storm system will deliver millions of gallons of water per square miles on drought-affected areas across California. Despite of much needed drought relief, the high risk of flash floods and mudslides will be dominant, especially in poor drainage areas and recent burn areas. 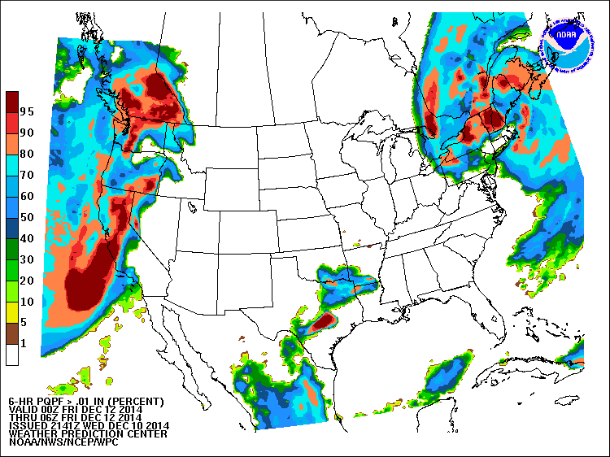 Rounds of heavy rainfall with amounts of 50-100 mm (2 to 4 inches). As of early December 11, 2014, coastal flood warnings are in effect for South Central Oregon Coast and Curry County Coast. Flood warnings are in effect in state of California for Eureka and Sacramento areas and flood watches for San Francisco Bay Area, Monterrey, San Joaquin Valley, Los Angeles and San Diego areas.

Snowfall amounts of 30 – 90 cm (1-3 feet) can be expected for the Sierra Nevada and the northern California mountains.