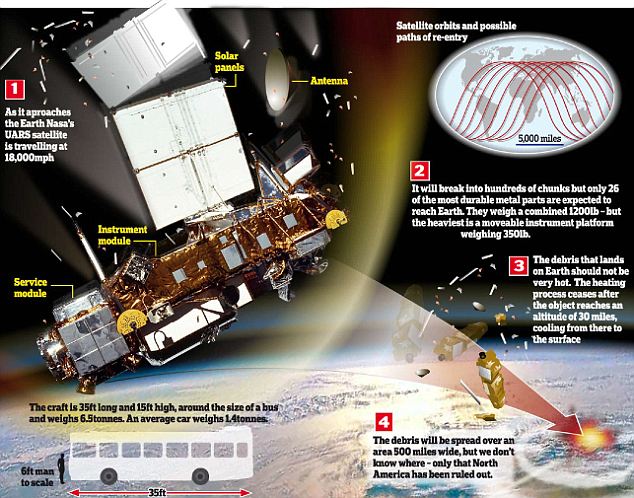 NASA has released a new statement pinpointing the re-entry of the UARS satellite on Sept. 24th:

"The Joint Space Operations Center at Vandenberg Air Force Base in California has determined the satellite entered the atmosphere over the Pacific Ocean at 14.1 degrees south latitude and 189.8 degrees east longitude. This location is over a broad, remote ocean area in the Southern Hemisphere, far from any major land mass. The debris field is located between 300 miles and 800 miles downrange, or generally northeast of the re-entry point. NASA is not aware of any possible debris sightings from this geographic area."

This is NASA's final status report on the re-entry of UARS. 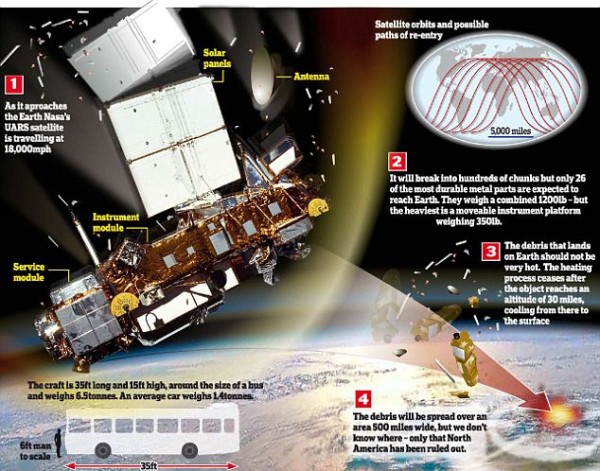 Six years after the end of its productive scientific life, UARS broke into pieces during re-entry, and most of it up burned in the atmosphere. Twenty-six satellite components, weighing a total of about 1,200 pounds, could have survived the fiery re-entry and reach the surface of Earth.
The Operations Center for JFCC-Space, the Joint Functional Component Command at Vandenberg Air Force Base, Calif., which works around the clock detecting, identifying and tracking all man-made objects in Earth orbit, tracked the movements of UARS through the satellite’s final orbits and provided confirmation of re-entry.

"This was not an easy re-entry to predict because of the natural forces acting on the satellite as its orbit decayed. Space-faring nations around the world also were monitoring the satellite’s descent in the last two hours and all the predictions were well within the range estimated by JSpOC," said Nick Johnson, NASA’s chief scientist for orbital debris, at NASA's Johnson Space Center in Houston.

UARS was launched Sept. 12, 1991, aboard space shuttle mission STS-48 and deployed on Sept. 15, 1991. It was the first multi-instrumented satellite to observe numerous chemical components of the atmosphere for better understanding of photochemistry. UARS data marked the beginning of many long-term records for key chemicals in the atmosphere. The satellite also provided key data on the amount of light that comes from the sun at ultraviolet and visible wavelengths. UARS ceased its scientific life in 2005. (NASA.gov) 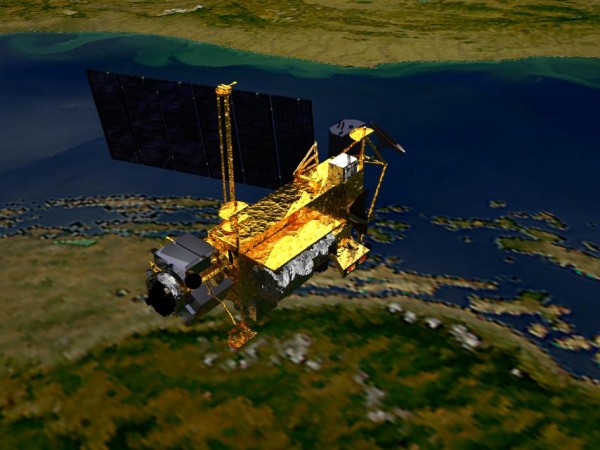 A significant amount of debris does not survive the severe heating which occurs during re-entry. Components which do survive are most likely to fall into the oceans or other bodies of water or onto sparsely populated regions like the Canadian Tundra, the Australian Outback, or Siberia in the Russian Federation. During the past 50 years an average of one cataloged, or tracked, piece of debris fell back to Earth each day. No serious injury or significant property damage caused by re-entering debris has been confirmed.

More than 22,000 objects larger than 4 inches (10 cm) are currently tracked by the U.S. Space Surveillance Network. Only about 1,000 of these represent operational spacecraft; the rest are orbital debris. The estimated population of particles between .4 inches and 4 inches (1 to 10 cm) in diameter is approximately 500,000. The number of particles smaller than .4 inches (1 cm) probably exceeds tens of millions.