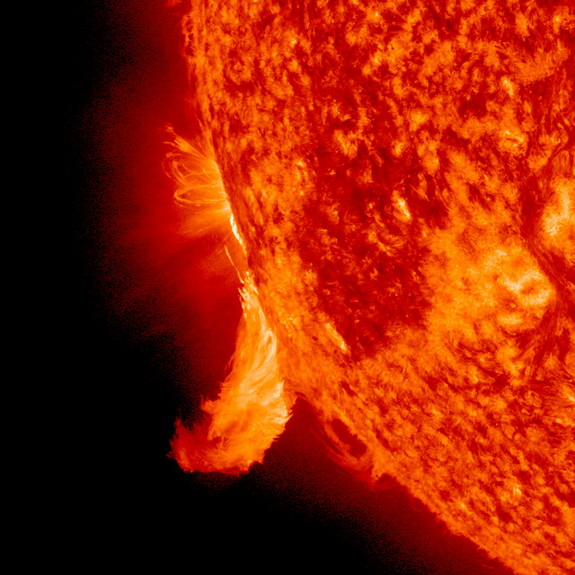 High-latitude sky watchers should be alert for auroras. A strong (Kp=7) geomagnetic storm is in progress. Earth's magnetic field has been strongly disturbed since approximately 1300 UT on Sept. 26th when a CME hit our planet. The impact strongly compressed the magnetosphere, exposing geosynchronous satellites to solar wind plasma, and ignited auroras around both poles.

Particles that were blasted from the sun by a huge eruption over the weekend have reached Earth, causing geomagnetic storms on our planet, which will likely trigger a stunning northern lights show for some lucky skywatchers.

The particles reached at Earth at 8:37 a.m. EDT (1237 GMT) today (Sept. 26), kicking off moderate geomagnetic storms at lower latitudes and more serious storms closer to the Earth's poles, according to the U.S. National Oceanic and Atmospheric Administration (NOAA). These storms can disrupt GPS signals, radio communications and power grids, but no such effects have yet been reported, NOAA officials said.

The storms should also give skywatchers in select locations a treat, creating dazzling auroras (phenomena also known as the northern and southern lights). Aurora watchers in Asia and Europe are most favorably positioned for this event, though it may persist long enough for viewers in North America.

The sun unleashed a powerful solar flare and an event known as a coronal mas ejection (CME) on Saturday (Sept. 24). CMEs are massive clouds of solar plasma that can streak through space at 3 million miles per hour (5 million kilometers per hour) or more. Luckily, this CME delivered a glancing blow. If it had hit Earth directly, the geomagnetic storms — and, possibly, the damage — could have been more serious. But we're not out of the woods yet, SWPC officials said.

The storm erupted from a region known as sunspot 1302. Sunspots are temporary dark patches on the solar surface caused by intense magnetic activity. The area around sunspot 1302 may be brewing up more trouble. Region 1302 remains capable of producing more activity and will be in a favorable position for that activity to have impacts on Earth for the next 3-5 days.

For now, however, the biggest effect of the geomagnetic storms may be the auroras, so skywatchers in favorable locations should look up when they get the chance. People in the mid- to high-latitudes should be alert for auroras after nightfall. The best hours to spot the northern and southern lights tend to be around local midnight, according to the website Spaceweather.com.

Sunspot 1302 has been particularly active lately, spouting off multiple X-class fares — the most poweful type — over the last few days. And that restlessness is part of a larger pattern, experts say. Solar activity has been ramping up over the last few months as the sun has roused itself from an extended quiescent phase in its 11-year cycle of activity.

Just last month, for example, the sun let loose with an X6.9 solar flare, which was the most powerful solar storm since December 2006, NASA scientists said. And the storms should keep coming over the next few years. Scientists expect activity in the current cycle — known as Solar Cycle 24 — to peak around 2013. (Space.com)