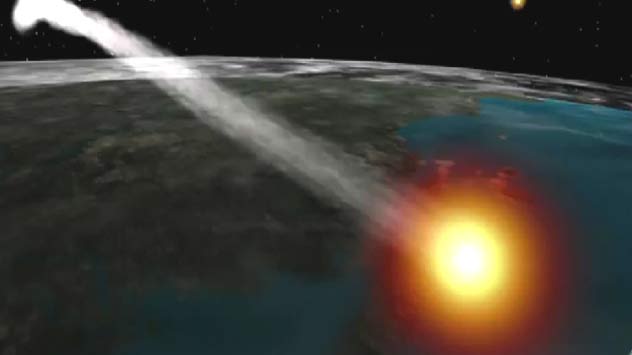 NASA’s UARS satellite is making its last orbits around Earth. Orbital elements just published by US Strategic Command suggest that re-entry could occur a little later than previously expected.

“For now, it looks like 00:00 – 04:00 UTC on Sept. 24,” says satellite tracking expert Ted Molczan, “but it could well happen even later. UARS will pass over North America and Europe several times during this period, but it will spend most of its time over oceans and sparsely populated land.“

Stay tuned for updates and meanwhile keep an eye out for the doomed satellite.  (SpaceWeather)

Current predictions of the potential impact zone cover a giant swath of the planet — anywhere between the latitudes of northern Canada and southern South America. Scientists will be able to refine these projections as the spacecraft makes its fiery journey through the atmosphere. Scientists at NASA’s Orbital Debris Program Office estimate that at least 26 large pieces of the bus-size satellite will endure the scorching heat of re-entry. Approximately 1,170 pounds (532 kilograms) of material are expected to reach the ground. NASA has calculated the odds of anyone anywhere in the world being hit by a piece of the UARS satellite at 1in3,200. (Space.com)

These pieces of debris will likely be scattered over a 500-mile (804-kilometer) long path. But agency officials have been quick to stress that there is very little chance that satellite chunks will smash intotowns or cities.

As of 10:30 a.m. EDT on Sept. 23, 2011, the orbit of UARS was 100 miles by 105 miles (160 km by 170 km). Re-entry is expected late Friday, Sept. 23, or early Saturday, Sept. 24, Eastern Daylight Time. Solar activity is no longer the major factor in the satellite’s rate of descent. The satellite’s orientation or configuration apparently has changed, and that is now slowing its descent. There is a low probability any debris that survives re-entry will land in the United States, but the possibility cannot be discounted because of this changing rate of descent. It is still too early to predict the time and location of re-entry with any certainty, but predictions will become more refined in the next 12 to 18 hours.

Due to the robust nature of some of the parts on the satellite, it is likely that approximately 500kg of material will impact the ground or water.