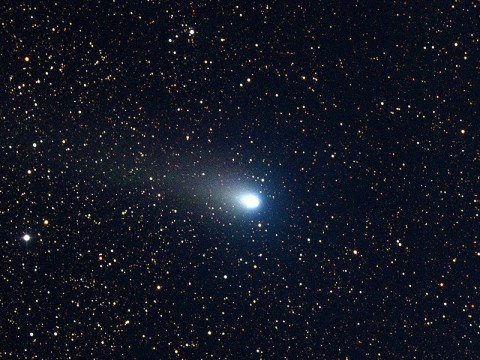 On October 8th Earth is going to plow through a stream of dust from Comet 21P/Giacobini-Zinner, and the result could be an outburst of Draconid meteors.

“We’re predicting as many as 750 meteors per hour,” says William Cooke of the Meteoroid Environment Office at NASA’s Marshall Space Flight Center in Huntsville, Ala. “The timing of the shower favors observers in the Middle East, north Africa and parts of Europe.“

One respected forecaster, Paul Wiegert of the University of Western Ontario, says the meteor rate could go as high as 1000 per hour — the definition of a meteor storm. It wouldn’t be the first time. Close encounters with dusty filaments produced storms of more than 10,000 Draconids per hour in 1933 and 1946 and lesser outbursts in 1985, 1998, and 2005.

Forecasters at NASA and elsewhere agree that Earth is heading for three or more filaments on October 8th. Multiple encounters should produce a series of variable outbursts beginning around 1600 Universal Time (noon EDT) with the strongest activity between 1900 and 2100 UT (3:00 pm – 5:00 pm EDT).

Unfortunately, many of this year’s Draconids will go unseen. Draconids are faint to begin with, and this year they have to complete with an almost-full Moon. Lunar glare will reduce the number of meteors visible from Europe, Africa and the Middle East by 2- to 10-fold. The situation is even worse in North America where the shower occurs in broad daylight—completely obliterating the display. Source

Where will this be visible?

The enhanced activity will be visible from Europe, North Africa and North/West Asia. The green areas in the maps below show the regions which will be dark (Sun 6 degrees below horizon) and oriented towards the dust trail (radiant above horizon) at 17h00m and 20h00m UTC on 8 October 2011. The event will not be visible outside these areas. 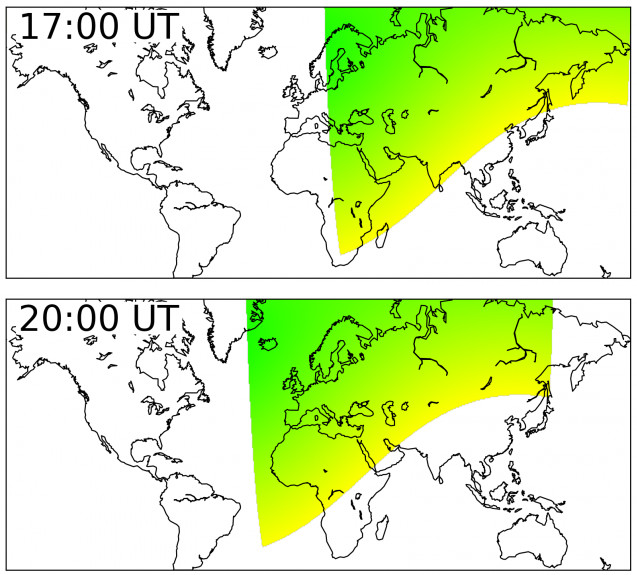 Where to look for Draconids?

The meteors will appear to radiate from the constellation of Draco, which is located in the North-Western part of the sky from most locations. However, meteors may appear anywhere in the sky, so just look up! The upcoming outburst will constitute a period of enhanced risk for vehicles in near Earth space as each spacecraft is unique, and components have differing damage thresholds.

The meteor shower risk assessment is actually more art than science, and there has been some variation in the projected intensity levels of the 2011 Draconids by meteoroid forecasters. But spacecraft operators are already being notified to weigh defensive steps.

The Draconids do present some risk to spacecraft, Cooke confirmed. They could potentially become the next significant event in low-Earth orbit as far as meteoroids are concerned, he added.

Cooke said that a significant fraction of spacecraft anomalies produced by shower meteoroids are caused by electrostatic discharges when meteoroid meets satellite.

And while no spacecraft electrical problems were reported during the strong Draconid outbursts of 1985 and 1998, he said that the lack of past anomalies should not be taken as carte blanche for satellite operators to ignore in 2011.

The chance of electrical anomalies is low, however, due to the Draconids slow speed, Cooke pointed out.

Low possible visibility isn’t stopping a group of middle school and high school students from Bishop, California, however. They plan to observe the shower from the stratosphere where the sky is dark even at noontime.

Led by Science@NASA’s Tony Phillips, the 15 students have been launching helium balloons to the edge of space since May of 2011. With more than 95% of Earth’s atmosphere below the balloon, the sky above looks almost as black as it would from a spacecraft—perfect for astronomy.

“The students are going to attempt to fly one of our low-light meteor cameras in the payload of their balloon,” says Cooke. “I hope they catch some Draconid fireballs for us to analyze. They could be the only ones we get.”