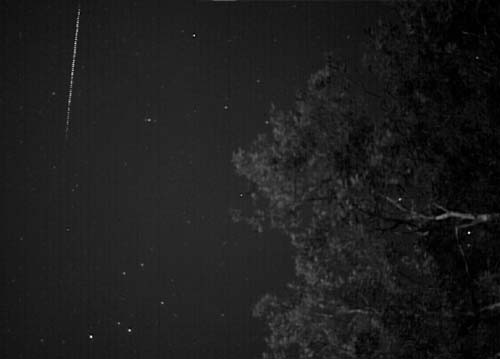 A surprise meteor shower spotted in February was likely caused by cosmic “bread crumbs” dropped by an undiscovered comet that could potentially pose a threat to Earth.

The tiny meteoroids that streaked through Earth’s atmosphere for a few hours on Feb. 4 represent a previously unknown meteor shower, researchers said. The “shooting stars” arrived from the direction of the star Eta Draconis, so the shower is called the February Eta Draconids, or FEDs for short.

The bits of debris appear to have been shed by a long-period comet. Long-period comets whiz by the sun very infrequently, so it’s tough to predict when they last cruised through our neck of the woods — and when they’ll come back, researchers said.  That uncertainty is cause for some concern in this case, they added. <Close Encounters of the Comet Kind >

“If the meteoroids can hit us, so can the comet,” said FEDs discoverer Peter Jenniskens, of the SETI (Search for Extraterrestrial Intelligence) Institute and NASA’s Ames Research Center. “We don’t know whether the comet has already passed us by or is still on approach.” Still, Jenniskens stressed that the chances of such a collision are extremely remote.

Jenniskens heads the Cameras for Allsky Meteor Surveillance (CAMS) project, which has been monitoring the San Francisco Bay Area’s night skies with low-light video cameras in an effort to map meteor showers. CAMS cameras picked up the FEDs, bringing the tally of officially recognized meteor showers to 64.

The comet that produced the meteor shower is unknown. It may have last zipped by the sun just a few hundred years ago, or many thousands, researchers said. But it apparently came relatively close to Earth on its last trip through the inner solar system. <Comet Dive-Bombs Sun During Big Solar Eruption > At that time, the comet released a cloud of dust, which is now making its own way around the sun.

Jenniskens teamed up with a colleague, Finnish astronomer Esko Lyytinen, to investigate when the FEDs might have another encounter with Earth. Lyytinen calculated a possible return in 2016 or 2023, and after that not again until 2076, researchers said. Whenever the FEDs show up again, astronomers will study them closely. Future observations of the shower may reveal key information about its parent comet — including whether or not it poses a real danger of ever slamming into Earth. However, it can be tough to gauge a comet’s path based on how its sloughed-off pieces are moving around the solar system.

Dusty comet debris is affected primarily by things like radiation pressure and gravity. But comets’ orbits are more of a wild card, since the icy wanderers tend to spawn gaseous jets as they approach the sun and begin heating up. These jets can have a big impact on comet trajectories.

Chances are very small that the comet will actually hit us, as such impacts are rare in Earth’s history. (Space.com)

The new shower was named theFebruary eta Draconids and is now listed as shower 427 in the IAU Working List of Meteor Showers. A paper on this discovery was submitted to the Journal of the International Meteor Organization  .

The Central Bureau for Astronomical Telegrams of the International Astronomical Union issued this TELEGRAMannouncing the discovery of the February Eta Draconids: