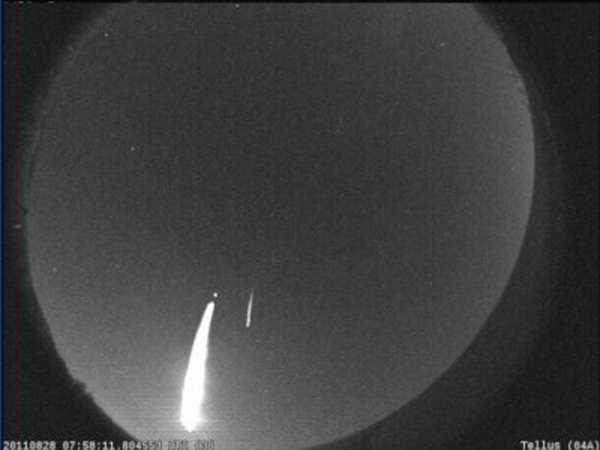 A bright meteor lit up the night sky above Atlanta on Sunday, August 28, 2011, in a dazzling display caught by NASA cameras.

NASA's network of all-sky cameras, which monitors the sky for meteor and fireball events, caught several views of the "shooting star" from different cities, including a video recorded from Cartersville, Ga., though it was difficult to pinpoint the meteor's core. <Video of the Atlanta meteor >

The meteor was too bright for the all-sky camera in Cartersville, Ga., to accurately determine the center of light, so manual analysis will be required to determine a more accurate end point.  The meteor was streaking over the Atlanta suburb of Duluth at an altitude of about 65 miles (105 kilometers) when it was first spotted, and fizzled out at a point about 26 miles (42 km) between the towns of Stockbridge and McDonough.

Astronomers have different names for space rocks depending on where they are.

If you spot a meteor, you can check this NASA website to see if it the space agency has identified its origins: http://fireballs.ndc.nasa.gov/