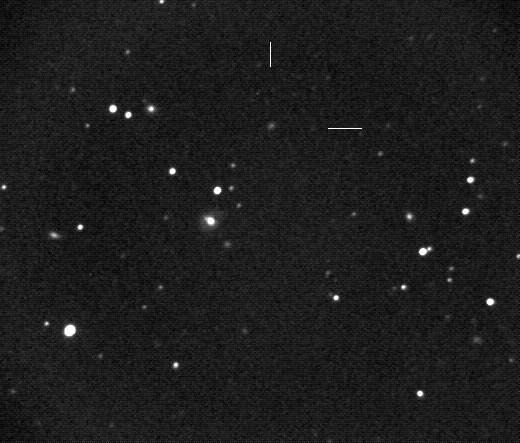 Comet Elenin (C/2010 X1), widely known for inaccurate reports of its threat to Earth, appears to be breaking apart. Observations by amateur astronomer Michael Mattiazzo of Castlemaine, Australia show a rapid dimming and elongation of the comet's nucleus akin to that of Comet LINEAR (C/1999 S4), which also disintegrated when it approached the sun in 2000. Comets are fragile objects, so this development while unexpected comes as no surprise. (SpaceWeather)

Current Brightness of Present/Future comets observable from the Southern Hemisphere on Aug 29 , 2011.

PERSONAL VISUAL LIGHT CURVE COMET C/2010 X1 ELENIN
Red curve is predicted rate of brightening. H0=10 and n=4.
Purple line is time of perihelion. Black dots are personal magnitude estimates.
Observations from August 20 indicate that comet Elenin underwent a dramatic fade.
The comet is in the process of disintegrating on its way towards perihelion
and thus will no longer become potentially observable with the unaided eye.

The comet will pass perihelion on September 10, 2011 at a distance of 0.48 AU, later encountering the Earth on October 17 at 0.23 AU. The observing circumstances from Earth's perspective are highly favourable as comets are concerned. The close passage to the Sun and later close encounter with Earth are important factors in producing bright comets, especially if the solar encounter causes disruption to the nucleus, releasing dust particles. Unfortunately the comet appears intrinsically faint (absolute magnitude 10).Intrinsically faint comets are usually gas rich and dust poor, but they do have a tendency to brighten rapidly at perihelion.

The comet is inclined only 1.8 degrees from Earths orbit thus we will observe the comet virtually edge-on throughout the apparition. This will enhance the dust tail and trail – should the comet actually be able to produce dust!

The comet may appear visible to the unaided eye at magnitude 4 when well situated in the evening sky for Southern hemisphere
observers during early September 2011. By mid September, it continues to brighten but is lost to evening twilight. By late September, it passes 2 degrees from the Sun and should be visible through the SOHO C3 coronagraph (between Sep 23 and 29), and STEREO A&B spacecraft.

A maximum phase angle of 177 degrees is reached around September 26. Dust is very efficient at forward scattering of sunlight.
A surge of 2 magnitudes is possible if the comet is dust rich. However, the comet is not expected to be observable from the ground and and any attempts to do so will be very risky!

During early October, comet Elenin reappears in dawn skies for Northern hemisphere observers. Southerners need to wait until mid-October before the comet is sufficiently high enough for observation, but moonlight will interfere until October 23rd. (SouthernComets) 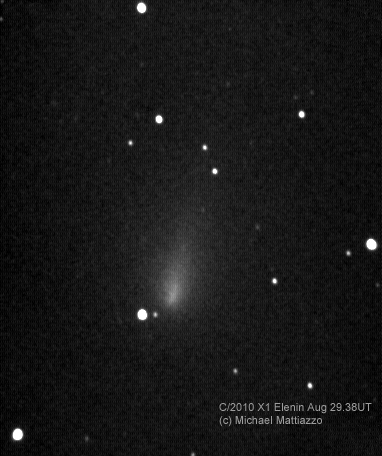 August 19, STEREO-B spacecraft has catched a very interesting event – the interaction of the gas coma of comet Elenin and coronal mass ejections from the Sun. On the video we can clearly see dynamics of the cometary tail, which squirming under the influence of powerful pressure of solar wind. After a brief increase, the brightness of the comet began to decreasing within a few days and reached a level of brightness that the comet was in early August. (SpaceObs)