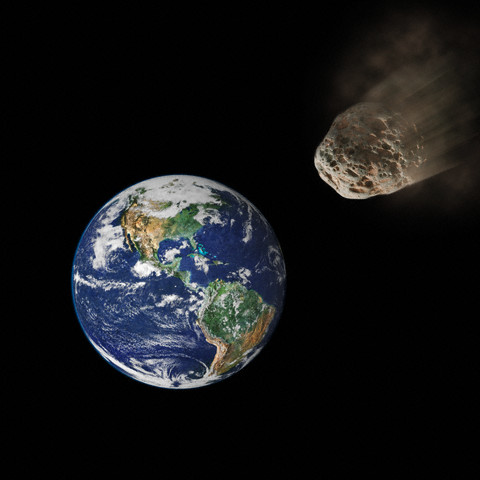 NASA scientists will have a unique observing opportunity with asteroid 2005 YU55, as the space rock “safely flies past Earth” at a distance slightly closer than the moon on Nov. 8, 2011.

At the point of closest approach, the asteroid will be no closer than 201,700 miles (324,600 kilometers). The gravitational influence of the asteroid will have no detectable effect on anything here on Earth, including our planet’s tides or tectonic plates. Although 2005 YU55 is in an orbit that regularly brings it to the vicinity of Earth, the 2011 encounter with Earth is the closest this space rock has come for at least the last 200 years.

During the close flyby, scientists will use the massive 70-meter Deep Space Network antenna to study the asteroid. The 70-meter (230-foot) diameter antenna is the largest, and therefore most sensitive, DSN antenna, and is capabile of tracking a spacecraft travelling more than 16 billion kilometers (10 billion miles) from Earth.

A live broadcast and chat from NASA’s Jet Propulsion Laboratory, Pasadena, Calif., will allow viewers to ask questions of scientists with NASA’s Near-Earth Object Program Office about asteroid YU55, and find out how NASA discovers, tracks and characterizes asteroids and comets.

Tracking of the aircraft carrier-sized asteroid will begin at 9:30 a.m. local time (PDT) on Nov. 4, using the massive 70-meter (230-foot) Deep Space Network antenna, and last for about two hours. The asteroid will continue to be tracked by Goldstone for at least four hours each day from Nov. 6 through Nov. 10. Radar observations from the Arecibo Planetary Radar Facility in Puerto Rico will begin on Nov. 8, the same day the asteroid will make its closest approach to Earth at 3:28 p.m. PST.

During tracking, scientists will use the Goldstone and Arecibo antennas to bounce radio waves off the space rock. Radar echoes returned from 2005 YU55 will be collected and analyzed. NASA scientists hope to obtain images of the asteroid from Goldstone as fine as about 7 feet (2 meters) per pixel. This should reveal a wealth of detail about the asteroid’s surface features, shape, dimensions and other physical properties. 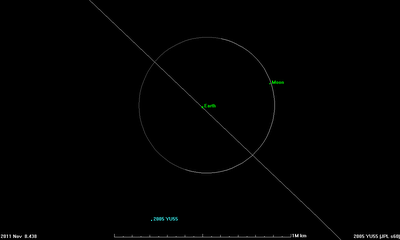 Arecibo radar observations of asteroid 2005 YU55 made in 2010 show it to be approximately spherical in shape. It is slowly spinning, with a rotation period of about 18 hours. The asteroid’s surface is darker than charcoal at optical wavelengths. Amateur astronomers who want to get a glimpse at YU55 will need a telescope with an aperture of 6 inches (15 centimeters) or larger.

The last time a space rock as big came as close to Earth was in 1976, although astronomers did not know about the flyby at the time. The next known approach of an asteroid this large will be in 2028. NASA detects, tracks and characterizes asteroids and comets passing close to Earth using both ground- and space-based telescopes. The Near-Earth Object Observations Program, commonly called “Spaceguard,” discovers these objects, characterizes a subset of them, and plots their orbits to determine if any could be potentially hazardous to our planet. 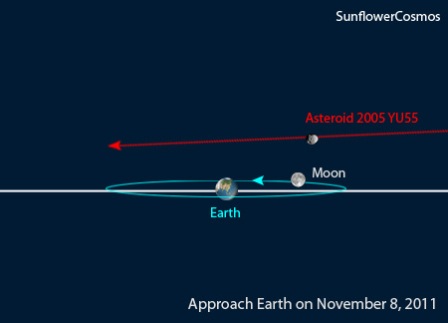 This rare flyby of the asteroid–which is known as 2005 YU55–will likely draw significant public interest because of the asteroid’s large size of about 396 meters (1,300 feet) in diameter, the nature of its close encounter with Earth and the public’s fascination with near-Earth objects.

The chat is sponsored by ScienceNOW, the daily news site of the journal Science. To participate, go to ScienceNow’s website on November 3 at 3 p.m. EDT and submit questions to:

The November 3 chat about asteroid 2005 YU55 and other near-Earth objects provides an ideal opportunity to ask experts about these and other topics:

The live online chat on 2055 YU55 is part of the journal Science’sweekly series of chats on the hottest topics in science held every Thursday at 3 p.m. EDT. (NSF)