A small asteroid discovered on November 14, 2015, made a close flyby to Earth only a couple of hours after it was observed. The asteroid named 2015 VY105 came as close to our planet as an average geostationary satellite. However, good news is that 2015 VY105 was so small it would not have caused any damage had it fallen on Earth.

After this year's Halloween asteroid 2015 TB145, another small body has been discovered to approach our planet. It has traveled to a much closer distance than the 'spooky' rock, however, it is much smaller, and as such posed no threat, even though it was discovered only a few hours prior to the flyby. 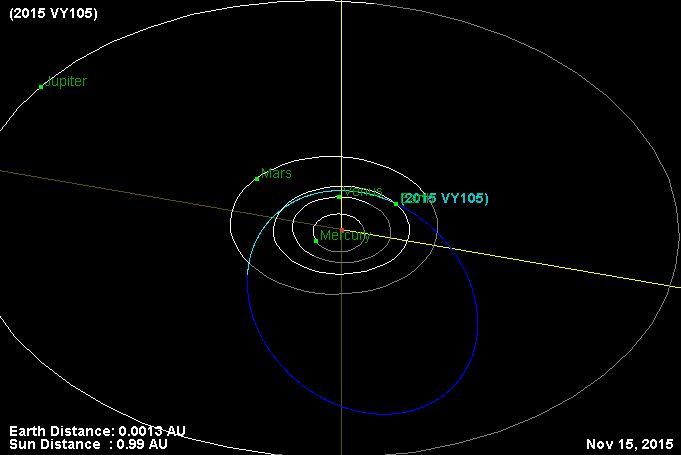 The rocky asteroid was discovered on November 14 by the Catalina Sky Survey and International Astronomical Union's Minor Planet Center has classified it as an Apollo type object, that is, an asteroid class known to occasionally cross paths with Earth.

The object's size has been estimated to range between 4.1 and 9.2 m (13.5 and 30.2 feet) which makes it small enough to pose no threat in case of falling on Earth. Had it actually entered our atmosphere, its largest part would most likely dissipate because of the air friction, which would provide quite a spectacular view.