Discovered nearly six years ago by Robert McMillan at Steward Observatory’s Spacewatch Telescope in Arizona, 2005 YU55 has been this way before. In April 2010 it passed close enough for detailed radar probing by the giant radio dish at Arecibo, Puerto Rico. It approached even closer in 1976 but went undetected.  Given its size and diminutive brightness, the object must be quite dark and thus likely carbon-rich. Its rotation period is relatively long, 18 to 20 hours.

JPL classified this asteroid as Condition code 2 (orbit uncertainty estimates 0-9, with 0 being good, and 9 being highly uncertain). If 2005 YU55 would impact Earth it would deliver a kinetic-energy punch equivalent to several thousand megatons of TNT. But scientist assure us that no such thing is going to happen.

Where to look at sky for close flyby?

The asteroid will approach Earth from the sunward direction, so it will be a daylight object until just before the time of closest approach. Then 2005 YU55should reach a visual magnitude of 11.2, putting it within reach of backyard telescopes with apertures of at least 6 inches under fairly dark skies — though you’ll be fighting light from the nearly full Moon.

The pass’s track is especially favorable for western Europe and North America. But you’ll need to know exactly where and when to look: the object will traverse the 70° of sky eastward from Aquila to central Pegasus in just 10 hours, clipping along at 7 arcseconds per second. You’ll need at least a 10- or 12-inch scope, a CCD camera, and ideally one or more of the standard filters commonly used by professional astronomers. You can get the details here. And here is a link providing detailed chart and instructions released by Sky&Telescope.

NASA’s Jet Propulsion Laboratory released today a movie featuring more information about the much-discussed 2005 YU55, a 400-meter-wide asteroid that will pass by Earth  Tuesday at a distance closer than the Moon.  NASA’s Near-Earth Objects Observation Program will continue tracking YU55 using the 70-meter radar telescope at the Deep Space Network in Goldstone, California, as well as with the Arecibo Planetary Radar Facility in Puerto Rico. Radar imaging allows scientists to better study the surface features and composition of fast-moving, dark objects like YU55 which reflect very little visible light. (UniverseToday)

The space rock will fly by at a distance of just 201,700 miles (325,000 kilometers), which is actually inside the orbit of the moon. NASA has assured the world that the asteroid, officially named 2005 YU55, poses no threat to our planet. But what about our planet’s loyal sidekick? Is the moon in danger?

Don Yeomans, director of NASA’s Near-Earth Object Program Officeat the Jet Propulsion Laboratory in Pasadena, Calif., said asteroid 2005 YU55 will not hit the moon. While the space rock whizzes past the planet at a clip of 30,000 miles per hour (13 km/s), the moon will be about a fourth of its way to the opposite side of Earth. Like two ships passing in the night, they’ll miss each other by more than 150,000 miles (240,000 km). The largest near-Earth asteroid that crosses Earth’s orbit is only about 8 kilometers <5 miles > wide.

But if 2005 YU55 were on a collision course with the Moon, DonYeomans stated that it would cause a significant impact crater … at least 4 kilometers <2.5 miles > wide. That’s significant, but still a pretty small crater in terms of the hierarchy of lunar craters.

The South Pole-Aitken basin is  the moon’s biggest impact crater with 1,600 miles (2,500 km) in diameter. An asteroid the size of 2005 YU55 impacts Earth about once every 100,000 years and because the moon is a much smaller target than Earth, such an event happens on the moon only once every several hundred thousand years. Moon has no atmosphere, no erosion and no tectonic activity so all the impacts it has ever experienced remain imprinted on its surface.

If the 400-meter-wide asteroid 2005 YU55 hit the Moon it would kick up enough dust — and that dust would moving at a high enough speed — for a small quantity to escape the moon’s gravity and coast all the way to Earth, 240,000 miles away according to Don Yeomans. While much of the blast debris would burn up in our atmosphere, some fragments might make it to the ground. This has happened during past asteroid-moon collisions. “We know of lunar meteorites that have made it,” he said. (Space.com)

It is also time for the annual Taurid meteor shower. Which sometimes produces fireballs. During the week ending November 4, 2005, the large number of fireballs seen all over the world led some to suggest UFO visitations. These fireballs may have been space junk or the Taurids . 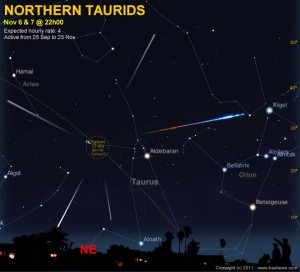 Typically, Taurids appear at a rate of about 7 per hour, moving slowly across the sky at about 27 kilometers per second (17 miles per second), or 65,000 miles per hour. If large enough, these meteors may become bolides, with spectacular light shows and even audible sound. The Taurids also have more frequent peaks which may result from a heavier concentration of material in the stream, which only hits Earth during some passes.Due to the stream’s size, the Earth takes several weeks to pass through it, causing an extended period of meteor activity, compared with the much smaller periods of activity in other showers. The Taurids are also made up of weightier material, pebbles instead of dust grains. (Wikipedia)

And what is really interesting we are supposed to be entering the remnants of (disintegrated) comet Elenin starting around this time frame.

Anyhow, don’t forget about FEMA testing of Emergency Alert System. The news is that a phrase “This is a test!” changed into “This is an emergency alert!”. Here is a video that explains how this test will be realized. The test is scheduled for 2:00pm EST. Oh, yeah, and also PACWAV11: Tsunami Drill is going to be held the same day. It is actually written into the Exercise PACWAV11 documents that this drill can potentially “go live” during the time of play.