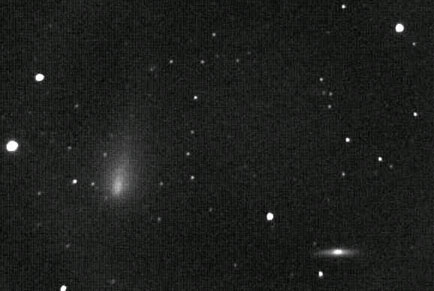 Whenever astronomers discover a comet headed inbound toward a close encounter the Sun, there's always buzz among observers about how bright it might get. That was certainly the case last December, when Comet Elenin (C/2010 X1) made its debut. Many hoped it would become easily visible to the unaided eye as it rounded perihelion nine months later.

By April, that initial enthusiasm had waned a bit, as it became clear that Comet Elenin was small and intrinsically faint.

The keys to its peak visibility were the closeness it would eventually have to the Sun on September 10th (0.48 astronomical unit, about 45 million miles) and to Earth in mid-October (0.23 a.u.). In fact, amateur observations through July and early August suggested that this interloper might even be ahead of schedule, brightness-wise. The hearts of comet observers everywhere raced a little faster.

Now all bets are off. Within the past week the comet's brightness has declined by 50%, dropping a half magnitude between August 19th and 20th, according to Australian observer Michael Mattiazzo. (The comet's current location in western Virgo makes it virtually unobservable from northern latitudes.)

Images show Comet Elenin's bright core becoming elongated and diffuse — the telltale signs that its icy nucleus has either broken in two or disintegrated altogether.

One veteran comet-watcher who's not surprised is John Bortle. Four months ago, based on Elenin's performance to that point, he cautioned, "The comet may be intrinsically a bit too faint to even survive perihelion passage." And his words have proved prescient, as the fading continues (estimates are near 9th magnitude) and there's speculation that this object or its remnants might not be around much longer.

All those pseudoscientific bloggers who predicted planet-altering encounters with a cosmic visitor bright enough to be seen in broad daylight will just have to find something else to worry about. (Sky&Telescope)