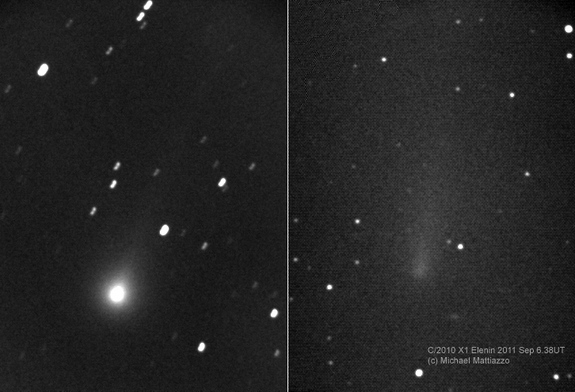 The moment long feared by conspiracy theorists is nearly upon us: The "doomsday comet" Elenin will make its closest approach to Earth Sunday (Oct. 16). Or what's left of it will, anyway.

Comet Elenin started breaking up in August after being blasted by a huge solar storm, and a close pass by the sun on Sept. 10 apparently finished it off, astronomers say. So what will cruise within 22 million miles (35.4 million kilometers) of our planet Sunday is likely to be a stream of debris rather than a completely intact comet. Astronomers are having trouble finding it, so it's probably dead and gone. That means it probably won't present much of a skywatching show Sunday, scientists have said.

And the leftovers of Elenin won't return for 12,000 years, astronomers say.

Elenin's apparent demise may come as a relief to some folks since apocalyptic rumors circulating on the Internet portrayed the comet as a major threat to Earth.

One theory claimed Elenin would set off havoc on Earth after aligning with other heavenly bodies, spurring massive earthquakes and tsunamis. Another held that Elenin was not a comet at all, but in fact, a rogue planet called Nibiru that would bring about the end times on Earth. After all, the comet's name could be taken as a spooky acronym: "Extinction-Level Event: Nibiru Is Nigh." Rumors were that it would cause three days of darkness when it's trail comes between Earth and Sun, but that was to happen on September 26th and we don't remember the darkness. You decide for yourself.

"Elenin was a second-rate, wimpy little comet that never should have been noted for anything, really," said astronomer Don Yeomans of the Near-Earth Object Program Office at NASA's Jet Propulsion Laboratory in Pasadena, Calif. "It was not even a bright one."

Elenin's remains will not be the only objects about to make their closest pass of Earth. One day after the Elenin flyby, the small asteroid 2009 TM8 will zip close by. Like Elenin, it poses no risk of striking our home planet.

Elenin was named after its discoverer, Russian amateur astronomer Leonid Elenin, who spotted it in December 2010. Before the icy wanderer broke up, its nucleus was likely 2 to 3 miles (3 to 5 km) in diameter, scientists say. Elenin never posed any threat to life on Earth. It was far too small to exert any appreciable influence on our planet unless it managed to hit us.

Elenin's supposed connection to earthquakes was just a correlation and a weak one at that. Relatively strong earthquakes occur every day somewhere on Earth, so it's easy — but not statistically valid — to blame some of them on the comet's changing position. We were writing about that correlation in the article The Elenin Timeline and earthquake connection!.

Elenin's crumbs will soon leave Earth in the rear-view mirror, speeding out on a long journey to the outer solar system. (Space.com)

This comet has apparently disintegrated. It faded dramatically after a solar flare on Aug 20. Images at the end of August revealed a spreading, more diffuse coma. It is highly unlikely that this comet survived perihelion in mid-September. This comet begins the month in Virgo. Even without the disintegration, it would fade rapidly, moving into Auriga by month's end. The best visibility is late in the month as seen from the southern hemisphere.