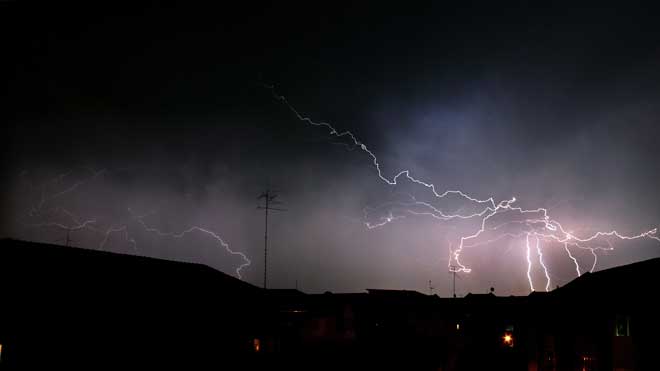 South-east Queensland in Australia was battered by a series of severe thunderstorms late on Saturday. The Australian Weather Bureau said sustained winds of 80 km/h were recorded in the Brisbane area. Thousands were left without electricity when strong winds brough down power lines. Large hail also fell throughout Queensland’s most populous city. 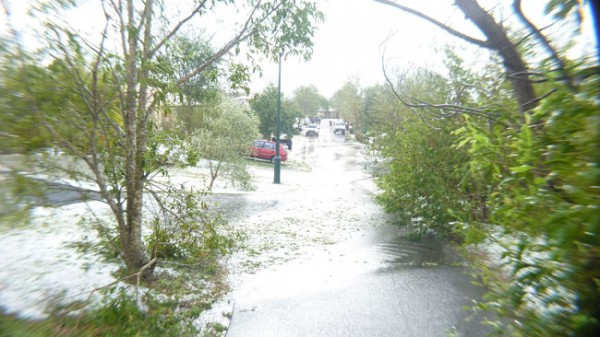 The deadly rain and thick hail that lashed the southeast on Thursday left thousands of homes without power and hundreds of homes and businesses severely damaged. Hail blanketed homes and roads, with the Logan Motorway, Forest Lake, Springfield and Beaudesert hardest hit. Houses flooded and roofs collapsed in Parkinson in Brisbane’s south with some residents rescued by fire crews. (Courier&Mail)

Hail stones as big as 2cm were reported in Mt Alford, with even bigger ones seen west of Toowoomba. Wind gusts of up to 80km/hr an hour battered Warwick and about 2000 homes and businesses on the Sunshine Coast lost power during the storms. Lightening strikes also caused bushfires in areas of the state’s north, central and western regions. Golf ball size hail reported at Albany Creek, 4cm hail was reported at Marburg, 2cm hail was reported at Oxley.

Firefighters battled over 30 blazes, with seven people from an isolated property near Barcaldine forced to flee their home around 3pm after a fast-moving fire threatened their property at Narbethong.

These thunderstorms are moving towards the east to northeast. Very dangerous thunderstorms hit Redcliffe, Deception Bay waters and Moreton Island. Other severe thunderstorms were located near Cleveland, the ranges between Gympie and Murgon, Woodford and the ranges south of Jimna. A more general severe thunderstorm warning is also current for the Northern Tropical Coast and Tablelands, Darling Downs and Granite Belt, Southeast Coast and parts of the Herbert and Lower Burdekin and Wide Bay and Burnett districts. (Courier&Mail)