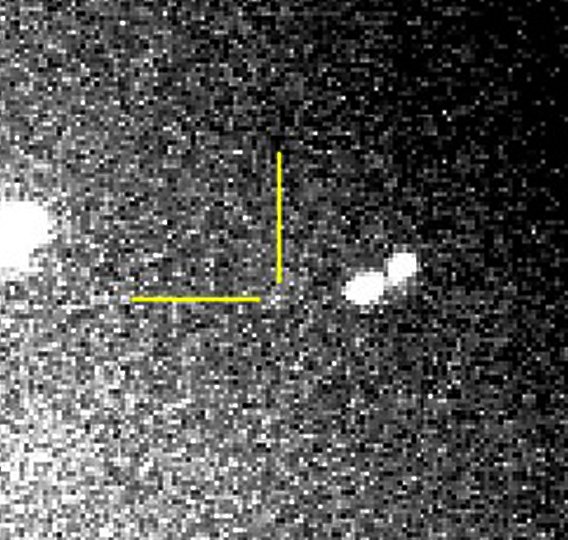 Comet Elenin, the supposed “doomsday comet” that has inspired so much confusion and controversy since its discovery in December 2010,  may have broken apart completely during its recent pass around the Sun.

Discoverer Leonid Elenin posted the image above on Oct. 8th on his website, SpaceObs.org. Taken with the International Scientific Optical Network’s 18″ telescope in New Mexico (ISON-NM), it shows what may be the remnants of Elenin, a faint cloud barely visible after its exit from behind the Sun. It is first images after conjunction, soon we well be have more appropriate conditions for it observation.

“On the left you can see possible position of this ‘cloud’,” Leonid writes. “Brightness of this object does not exceed 18m, which means what now, magnitude of the comet is lower then predicted on 12m. Hopefully in the near future debris of the comet will be observed on a large telescopes, and perhaps we’ll see some details of this ‘cloud’. Currently the comet is very low above the horizon and I observed it in nautical twilight, but comet will quickly ascend on the Northern skies, but it’s further observations may be hampered by the full Moon….”

Ground-based viewing of Elenin’s remains may be hampered over the next few days by the full Moon, he adds.

Although many rumors have been spread about the catastrophic danger Elenin poses to humans, in reality the comet was never a threat. Not expected to come any closer than 22 million miles (35 million km) to Earth, it’s been previously speculated that Elenin would most likely disintegrate during its current orbit.

“I don’t know why fearmongers my comet,” Leonid Elenin told  UniverseToday. “I received many letters from scared people. But if they believe in conspiracy theories I can’t help them.”

Hopefully this helps put some of the doomsday nonsense to rest! 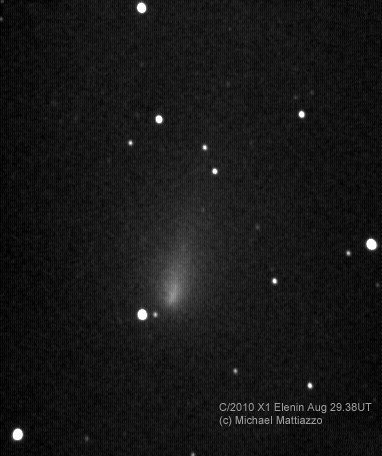 Elenin crosses Earth's orbit on October 19, and Earth crosses Elenin's orbit 12 days later on October 31. Earth passes 4.6 million km below Elenin's orbital path. So any debris shed by Elenin at perihelion will have to have enough velocity to fall 12 days behind Elenin and travel 4.6 million km vertically. The vertical part is easy. It's got about 50 days from perihelion to the point Earth crosses its path. So it needs a velocity of about 1 km/s.