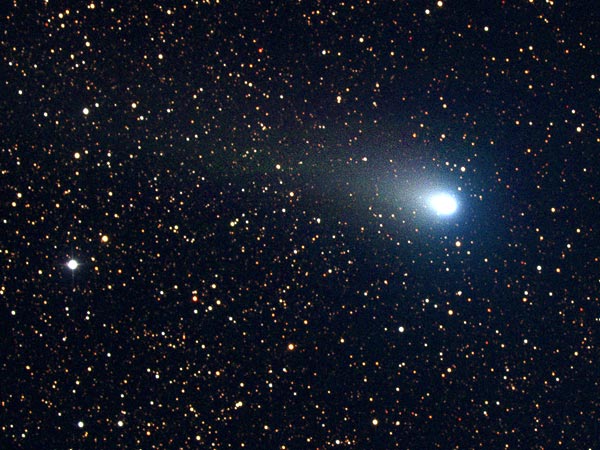 For all those who live in the Europe, North Africa, and the Middle East area, a short reminder to keep watching the clock for 17-18:00 UTC when you may be in the right place at the right time for a burst of activity from the annual Draconid Meteor Shower. There’s a possibility you might see up to 1,000 meteors an hour!

As always, meteor showers are unpredictable events – but that doesn’t mean you can’t be prepared or forewarned. While the gibbous Moon will put a damper on fainter meteor streaks, observers in Europe, North Africa, and the Middle East are well situated to catch a strong pocket of activity.

This isn’t the first time the Draconid meteor shower has produced a brief storm. In 1933 and 1946 the activity reached an average hourly rate of 10,000. While that’s pretty incredible, the same cometary debris trail left quite a show in the years 1952, 1985, and 1998 when it produced hundreds per hour. These remnants of Comet Giacobini-Zinner aren’t the most dramatic of all showings – but knowing where the meteoroid stream is located makes such predictions valid.

Start your observations just as soon as the sky gets dark. Since Draco is a northern constellation, those at high latitudes are move favored, so face toward the north and get comfortable. While the storm prediction will happen during daylight hours for North American observers, don’t give up hope! It looks like clear skies for many of us and chances are above average for catching a shooting star.

And don’t despair if you don’t live in Europe, North Africa, and the Middle East, or if you get clouded out. You can still watch and listen to meteors enter the atmosphere on Spaceweather radio. Meteors reflect radio signals as they burn up and you can hear this as eerie whistles and pings.

A similar system, still employing the radio reflection method displays meteors coming in on your computer with a cool graph – The Meteorwatch Live View. And follow Universe Today’s Adrian West on his Twitter feed, VirtualAstro and on his website MeteorWatch as he’ll be providing updates on observed meteor rates in various parts of the world. (UniverseToday)

Peak rates should occur between 1600 UT and 2200 UT (noon – 6 pm EDT) as Earth grazes a series of filaments nearly intersecting our planet’s orbit. Analysts at the NASA Meteoroid Environment Office prepared this plot showing how the meteor rate is likely to vary:

If the maximum around 1900 UT reaches 1000 meteors per hour, the 2011 Draconids will be classified as a full-fledged meteor storm. The question is, will anyone see it? Bright moonlight over Europe, Africa and the Middle East will reduce the number of visible meteors 2- to 10-fold. The situation is even worse in North America where the shower occurs in broad daylight.

One way to enjoy the Draconids, no matter where you live, is to listen to them. The Air Force Space Surveillance Radar will be scanning the skies over the USA during the shower. When a Draconid passes through the radar beam–ping!–there will be an echo. Tune in to Space Weather Radio for live audio.

In Europe, an international team of scientists plans to observe the shower from airplanes flying at ~30,000 feet where the thin air reduces the impact of lunar glare. In Bishop, California, a team of high school students will launch an experimental helium balloon to higher altitudes, 100,000 feet or more, where the sky is black even at noon. Cameras in the balloon’s payload might catch some Draconid fireballs during the peak hours of the outburst. (SpaceWeather)

Stay tuned for updates as Earth approaches the debris zone.