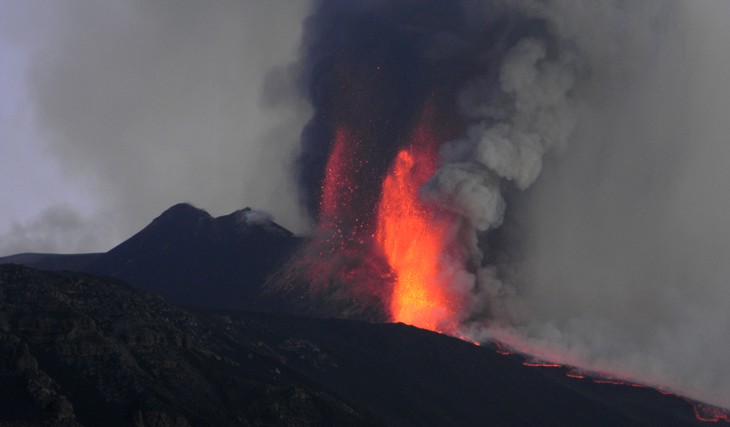 The Mount Etna volcano in Sicily, Italy, erupted for the twelfth time this year on Monday.

Throughout 2011, activity at Sicily’s Mount Etna has been characterised by paroxysms: short, violent bursts of activity. Each event has included volcanic tremors, ash emissions, and lava flows centered around the New Southeast Crater, just below the summit.

On the early morning of 29 August 2011, the 12th paroxysmal eruptive episode of this year occurred at the New Southeast Crater, almost 8 days after its predecessor. This event generated tall lava fountains and an eruption column that caused ash falls in the southeast sector of the volcano, as well as various lava flows down the western slope of the Valle del Bove. (Osservatorio Vulcanologico dell’Etna)

“During this paroxysm, the southeastern flank of the pyroclastic cone of the New Southeast Crater fractured, with the opening of several eruptive vents down to the base of the cone, which produced lava fountains and a broad lava flow that advanced to the Valle del Bove, too. The acme of this episode lasted less than 40 minutes.”

Mount Etna is one of the most active volcanoes in the world and is in an almost constant state of activity. On  12-13 January 2011 lava fountaining occurred from the vent on the east flank of Etna’s Southeast Crater cone, lasting more than 1.5 hours. Italian Authorities were forced to temporarily close airports for a couple of hours while the ash cloud cleared.